– me to my Moose peeps this morning

An article in the New York Times yesterday about the “Women of the Young Lords: The Revolution within the Revolution” panel at the Bronx Museum, included the rare link-out to a web site for some biographical information on one of the speakers, our own Denise Oliver Velez.

Much to my delight, that was a sub-page on a larger site about a film entitled “She’s Beautiful When She’s Angry”.

The trailer explains what it is about:

With women’s reproductive freedom under attack in the states and in the Republican controlled Congress and in the courts, when one of our major political parties is already loading up the testosterone cannon and aiming it at the woman who is the front-runner for the Democratic Party presidential nomination, when right wing groups are attacking Planned Parenthood … a group that saves women’s lives, it is a great time to remind ourselves of our past, the fights we won, only to lose again, and the battles we will face in 2016 and beyond.

From the About on the web site:

SHE’S BEAUTIFUL WHEN SHE’S ANGRY resurrects the buried history of the outrageous, often brilliant women who founded the modern women’s movement from 1966 to 1971. SHE’S BEAUTIFUL takes us from the founding of NOW, with ladies in hats and gloves, to the emergence of more radical factions of women’s liberation; from intellectuals like Kate Millett to the street theatrics of W.I.T.C.H. (Women’s International Conspiracy from Hell!). Artfully combining dramatizations, performance and archival imagery, the film recounts the stories of women who fought for their own equality, and in the process created a world-wide revolution.

SHE’S BEAUTIFUL does not try to romanticize the early movement, but dramatizes it in its exhilarating, quarrelsome, sometimes heart-wrenching glory. The film does not shy away from the controversies over race, sexual preference and leadership that arose in the women’s movement. SHE’S BEAUTIFUL WHEN SHE’S ANGRY captures the spirit of the time — thrilling, scandalous, and often hilarious.

That story still resonates today for women who are facing new challenges around reproductive rights and sexual violence, as the film shows present-day activists creating their generation’s own version of feminism. SHE’S BEAUTIFUL WHEN SHE’S ANGRY is a film about activists, made to inspire women and men to work for feminism and human rights.

Add your voice to those pushing back against the right-wing noise machine trying to defame Planned Parenthood:

Accusations that Planned Parenthood inappropriately profits off the sale of aborted fetuses are part of a “concerted attack” against both the organization and women’s ability to choose whether to have an abortion, presidential candidate Hillary Clinton said on Thursday.

“I think it is unfortunate that Planned Parenthood has been the object of such a concerted attack for so many years,” the Democratic front-runner said at an event in Greenville, South Carolina. “And it’s really an attack against a woman’s right to choose, to make the most personal, difficult decisions that any woman would face, based on her faith and the medical advice that she’s given.”

According to press reports, the Center for Medical Progress created a fake limited liability corporation in advance of the meeting it recorded with a Planned Parenthood doctor. The video was captured by actors using fake identification to pose as buyers from that fake human biologics company. This elaborate scheme raises serious questions about whether any federal or state laws were violated in securing the LLC or the personal identification that were part of its execution.

The video was also filmed without the consent of the Planned Parenthood doctor, which may violate California law.

There are other questions about possible coordination between the Center for Medical Progress and Members of Congress who knew about the video weeks in advance of its release.

“This is a new low, even for anti-abortion activists who will stop at nothing in their effort to undermine a woman’s right to choose,” said Schakowsky. “I believe the Center for Medical Progress may have broken the law in developing and executing this unbelievably elaborate and troubling scheme, and all Americans should have concerns about that. I hope that Attoneys General Lynch and Harris will investigate this case.”

“Planned Parenthood is a well-respected and important organization in my community,” said Lofgren. “One in five women in America has gone to Planned Parenthood at some point in their lives. The recent surreptitiously recorded video is the latest iteration of harassment and partisan attacks on Planned Parenthood which have become far too common, and raises serious legal questions that merit an investigation into whether the so-called ‘Center for Medical Process’ has broken the law.”

“Like the millions of women who access their broad-range of health services every day, we trust Planned Parenthood,” said Nadler. “This video is nothing more than a witch hunt – an elaborate, possibly illegal, scheme to attack Planned Parenthood, undermine their life-saving work and deny the Constitutional and moral rights of women across the country. I urge the Department of Justice and the state of California to investigate the Center for Medical Progress and determine if their activities in planning and making these videos violated state and federal laws. We need to stand up to such bullying tactics and ensure that every woman is free to make her own health care decisions.”

“I am deeply concerned about the allegations that federal and state laws were violated in an attempt to attack Planned Parenthood, an organization that provides critical health care services to more than three million men and women each year, and that the attack was coordinated by conservative activists who want to discredit Planned Parenthood and its work,” said Clarke. “I urge Attorney General Loretta Lynch and the Honorable Kamala Harris, Attorney General of California, to initiate a full investigation into this incident to determine if any fraud or other illegal activities were committed.”

Help Planned Parenthood, and women all across the country, by supporting them and their mission: DONATE HERE.

Find out what you can do at PP Action 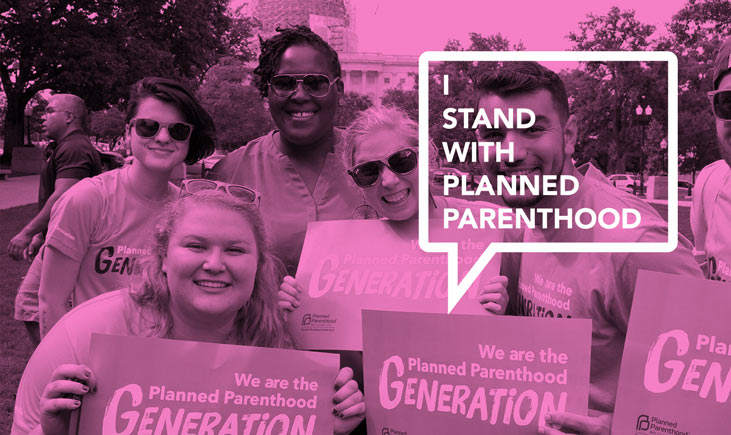