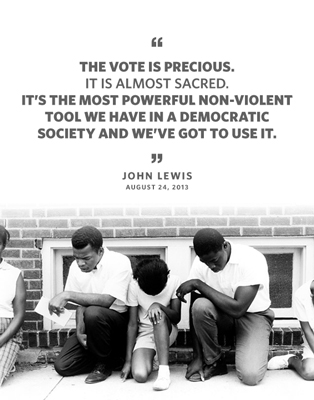 One day before the 50th anniversary of the Voting Rights Act, one of the most conservative federal appeals courts in the country wielded that law to strike down a Texas voter suppression law. A unanimous panel of the United States Court of Appeals for the Fifth Circuit, in an opinion written by a George W. Bush appointee, held that Texas’s voter ID law violates the Voting Rights Act and must, at the very least, be significantly weakened. Though the court did not accept every argument raised against the state’s voter ID law, and its opinion does not go nearly as far as a trial judge’s decision which also struck down this law, it is a significant blow to the state’s efforts to make voting more difficult.

“Texas Democrats believe that our nation and democracy is stronger when everyone is invited to participate in our electoral process.

“Today’s ruling is a victory for every Texas voter. Once again, the rule of law agrees with Democrats. The Republican voter ID law is discriminatory. Republicans made it harder for African-Americans and Latinos to cast their vote at the ballot box.

“We remain confident that the courts will find justice for Texas voters and ultimately strike down this racist and discriminatory law.

“I want to personally thank Congressman Marc Veasey, State Representative Trey Martinez Fischer, and all of our outstanding Democratic legislators who have fought to defend Texas voters from this discriminatory law.”

We AFFIRM the district court’s finding that SB 14 has a discriminatory effect in violation of Section 2 of the Voting Rights Act and remand for consideration of the proper remedy.” [ United States Court of Appeals for the Fifth Circuit,

A unanimous panel of the United States Court of Appeals for the Fifth Circuit has issued an opinion which is a great (but not complete) victory for those challenging Texas’s strict voter id law. The court affirms that the law violates Section 2 of the Voting Rights Act, but rejects the claim of discriminatory purpose and that the law constitutes a poll tax. The court remands for more findings on discriminatory purpose and for a decision on the remedy to the Section 2 violation. That remedy could allow Texas to keep enforcing its law for most people, so long as it gives ways to vote for those who face burdens under the law.

This is a narrow but important victory coming on the eve of the 50th anniversary of the passage of the Voting Rights Act.[…]

This also strikes me as an opinion written as narrowly as possible to still give a victory to the plaintiffs. (Perhaps that was the price of a unanimous opinion?) Winning on a Section 2 claim, even given the narrow remedial scope (more on that below) is still a significant victory for Voting Rights plaintiffs and the Department of Justice.