The Columbian Mammoth, (Mammathus columbi) once ranged all across the US, from its northern border to as far south as Costa Rica.The Columbian species evolved from the Asian elephants (Steppe Mammoth) that crossed the Bering land bridge approximately 1.5 million years ago.

The Mammoth became extinct about 11,000 years ago with the ending of the Pleistocene era. The Columbian’s cousin, the Woolly Mammoth entered North America about 100,000 years ago and occupied much of Canada. The ranges of these two species overlapped somewhat and there is evidence of cross breeding.

Exactly what led to their demise is unclear although we know that paleoamericans hunted them on their arrival some 13,000 or 14,000 years ago and up until their extinction. Climate and habitat change were also likely involved.

These huge creatures standing 13 feet tall and weighing 20,000 lbs were quite plentiful based on the number of remains found throughout the country. The remains of forty five mammoths have been documented in Benton County, WA alone, with most found in the Horse Heaven Hills where this site is located. The Columbian Mammoth is the official fossil of Washington State even though these bones are not yet fully fossilized.

The Coyote Canyon dig is located in the Horse Heaven Hills, just a few miles south of Kennewick Washington, also home of the famous, or infamous, 9,000 year old Kennewick Man who was found along the Columbia river. The photo below looking north shows Coyote Canyon with a sliver of the Columbia River in the mid ground. Finding mammoth remains is relatively common in this region.

As with most such paleontological sites, this one was found inadvertently during a quarrying operation on the edge of Coyote Canyon in 1999/2000, when excavating equipment dug up some large bones (a Mammoth mandible). Fortunately, after covering up the site the excavators moved elsewhere to dig. Eventually the land was sold to a local farming family who wanted the site to be preserved and developed as an educational site for K – 12 teachers, students, community volunteers and as an intern site for college students.

In 2008, an initial group of volunteer scientists and educators formed a non-profit foundation to pursue both educational and scientific goals. The Foundation was called the Mid-Columbia Basin Old Natural Education Sciences” (McBONES). Its professional leaders include: Paleontologist, Bax Barton, from the Burke Museum at the University of Washington; Geologist, George Last, with Pacific Northwest National Labs, and, High School educator, Gary Kleinknecht. Two weekends each month from March through October the site volunteers survey, map, dig, wash, screen, sort, process, and label their findings. Tours for school classes and community adults are regularly provided on these dig days so they can observe the ongoing dig process. 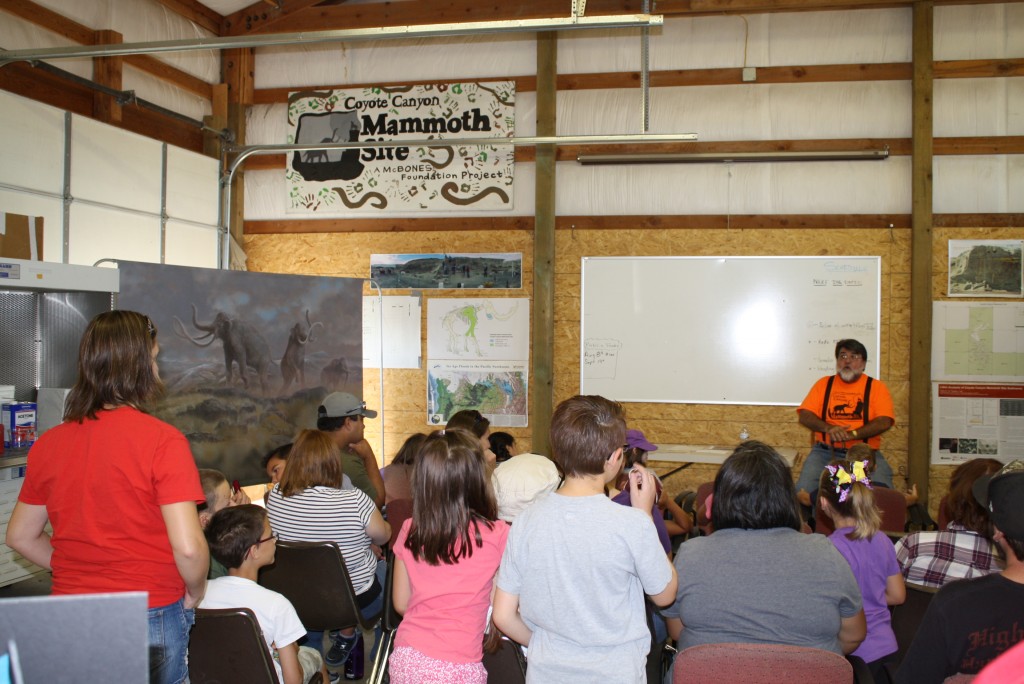 Educator, Gary Kleinknecht leads a tour for an enthusiastic audience in the dig house 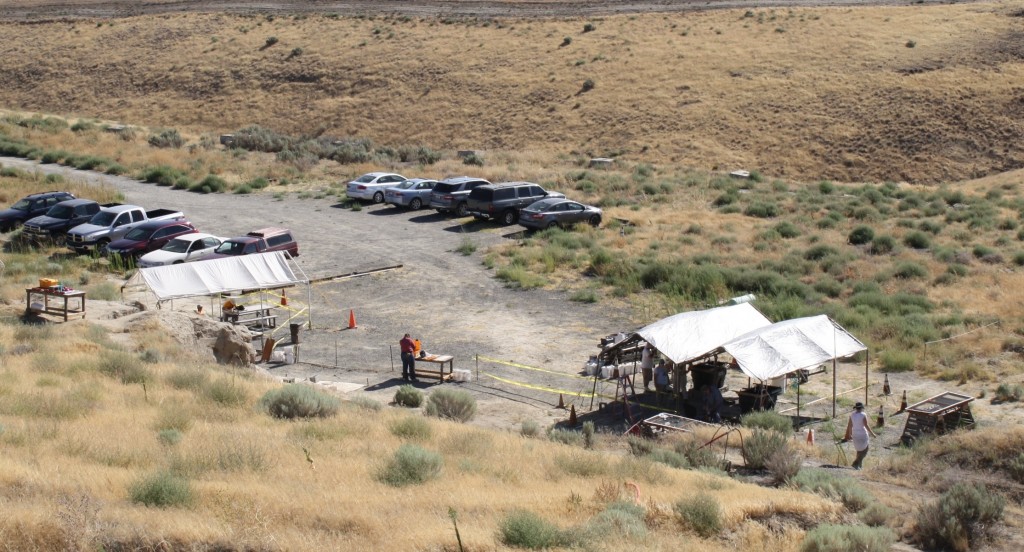 The dig site from above

The dig process moves at a glacial pace, especially when all work is done by volunteers on a bare bones budget. They proceed slowly and meticulously as they are inventorying everything that comes out of the site in order to document all of the geology and biology buried in these flood sediments. When completed they will not only have the mammoth skeleton but a detailed catalog of the stratigraphy and paleoecology of all of the flora and fauna that lived and died here over the past 17,000 years.

Digging began in late 2010. After the site was surveyed and laid out in 3-D grids, incremental digging and scraping began. Now in its 6th year, progress is inching along in terms of uncovering skeletal remains. Here is a photo of the site in 2011, its second year when their trophies were just a few rib bones. 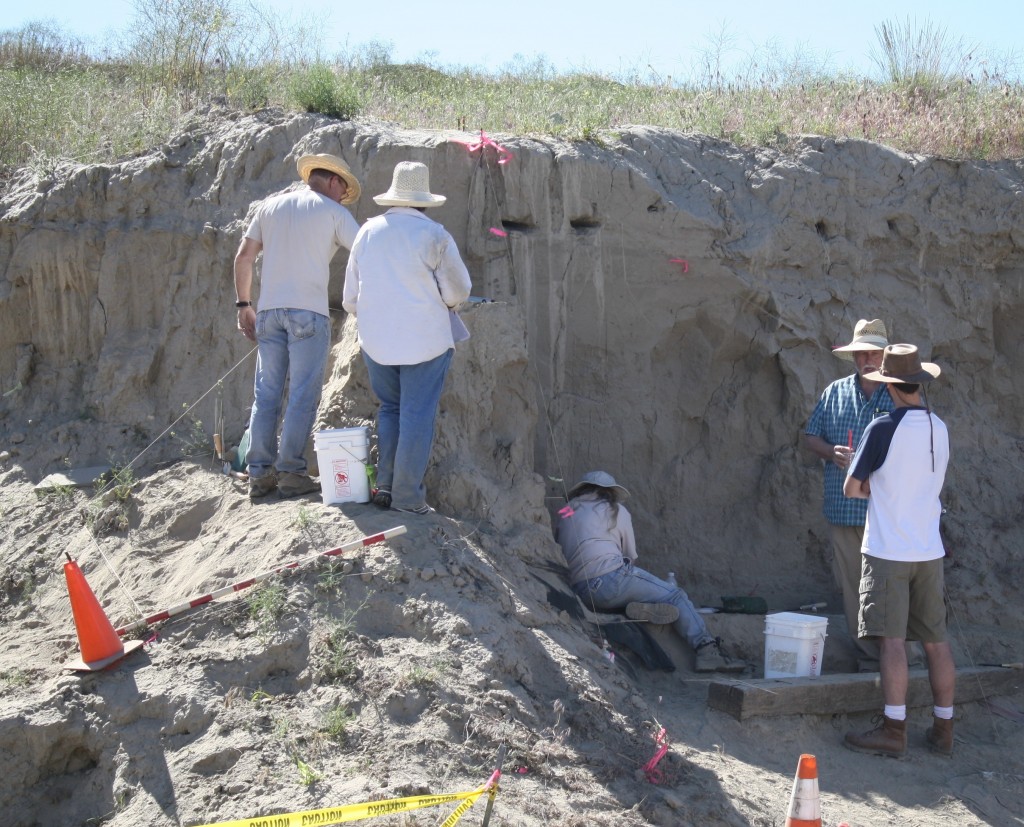 Today, considerably more of the mammoth has been excavated as shown below. The colored pieces in the graphic are those that have been found to date although some remain in the ground. 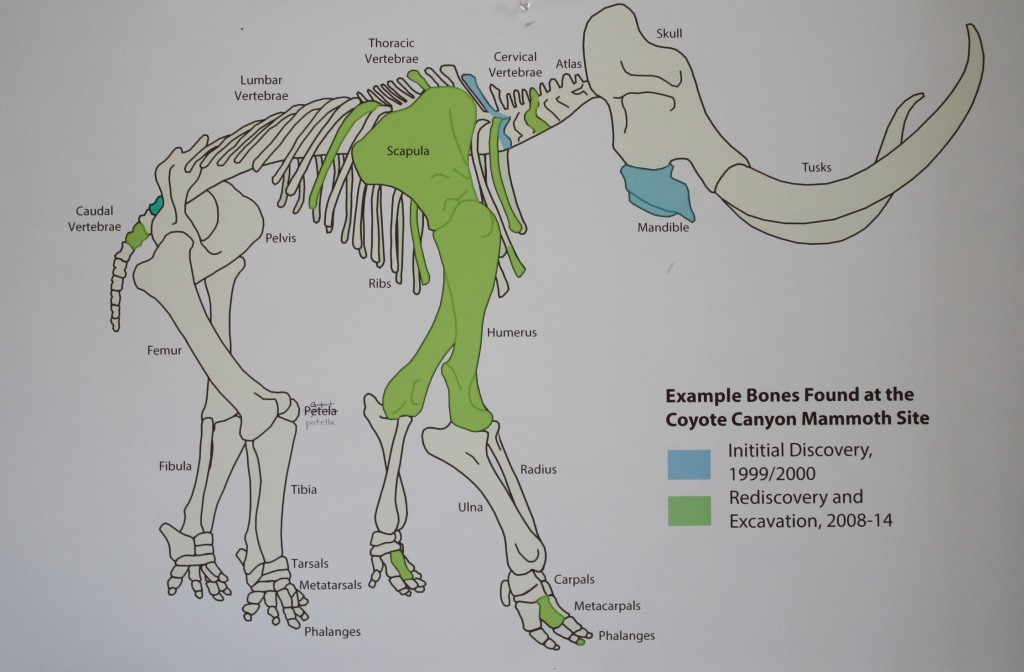 As the skeleton is relatively articulated, they expect to find most if not all of the skeleton relatively in place. It must have arrived in one piece likely having floated down stream after being swept up in one of the Ice age floods that roared through this area about 17,000 years ago. Supporting this hypothesis it is of interest is that there are several erratic pieces of granite that must have rafted along in ice bergs and were found within the same sediments as the mammoth bone bed. Granite is not found locally and these erratics are likely from British Columbia.

Once recovered and removed from the sediment bed, the bones are sorted, identified, cleaned, and preserved before being put on display in the dig house for students and for tour participants. 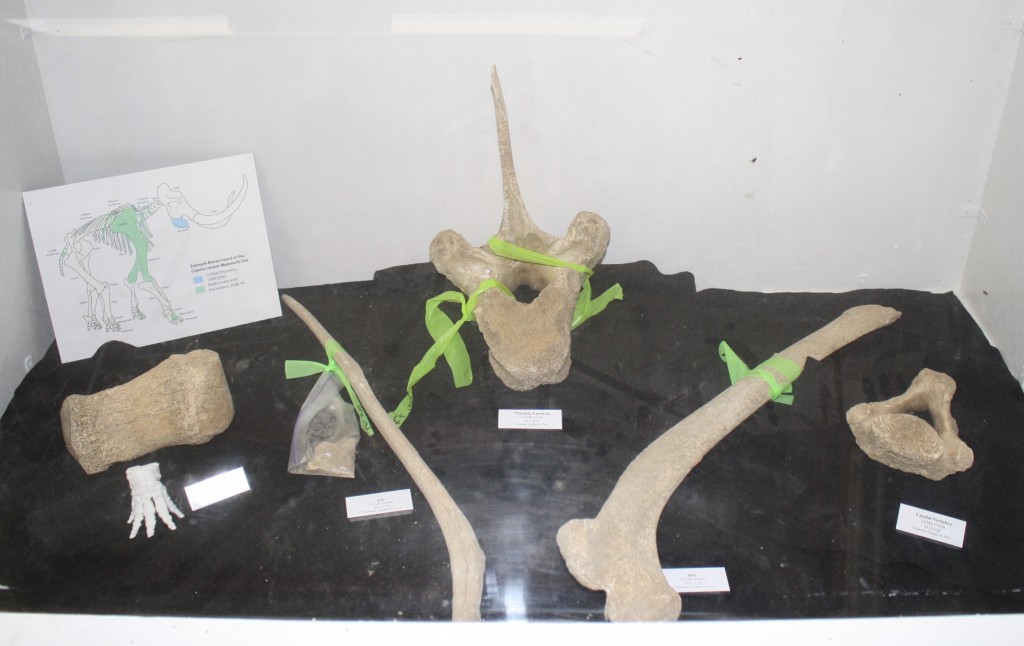 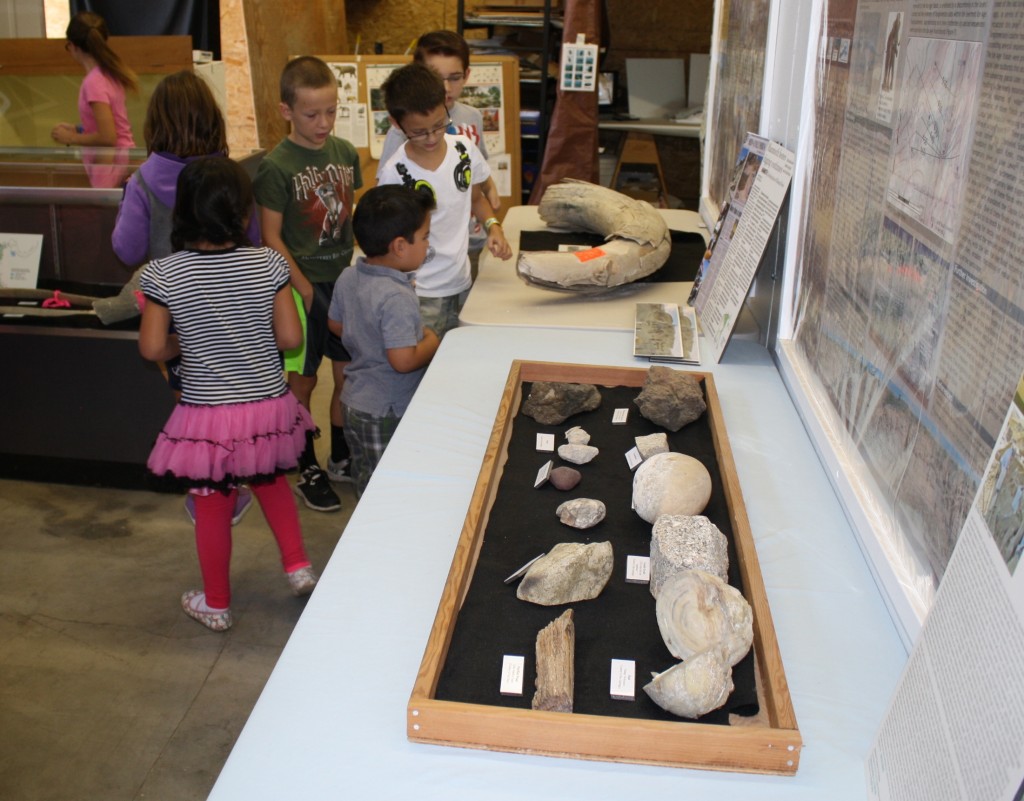 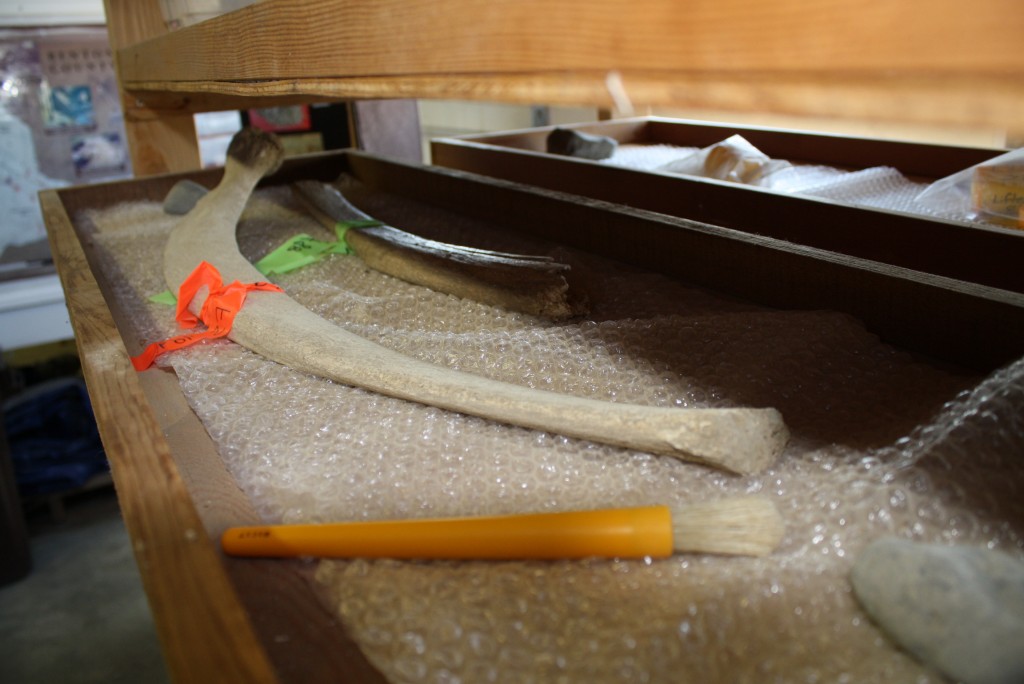 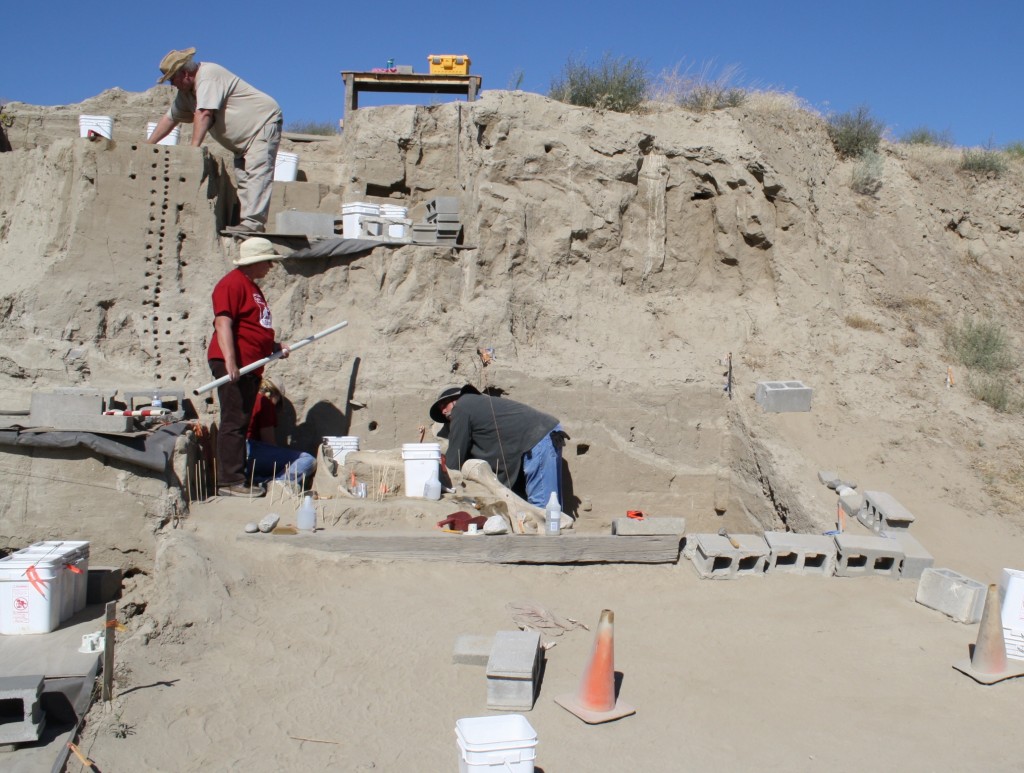 All soil and remnants are put into labeled buckets for later washing, and drying before being sent to the lab for sorting and identification. From the buckets, the soil is washed over a fine mesh to separate the fragments. Then it is laid out to dry. 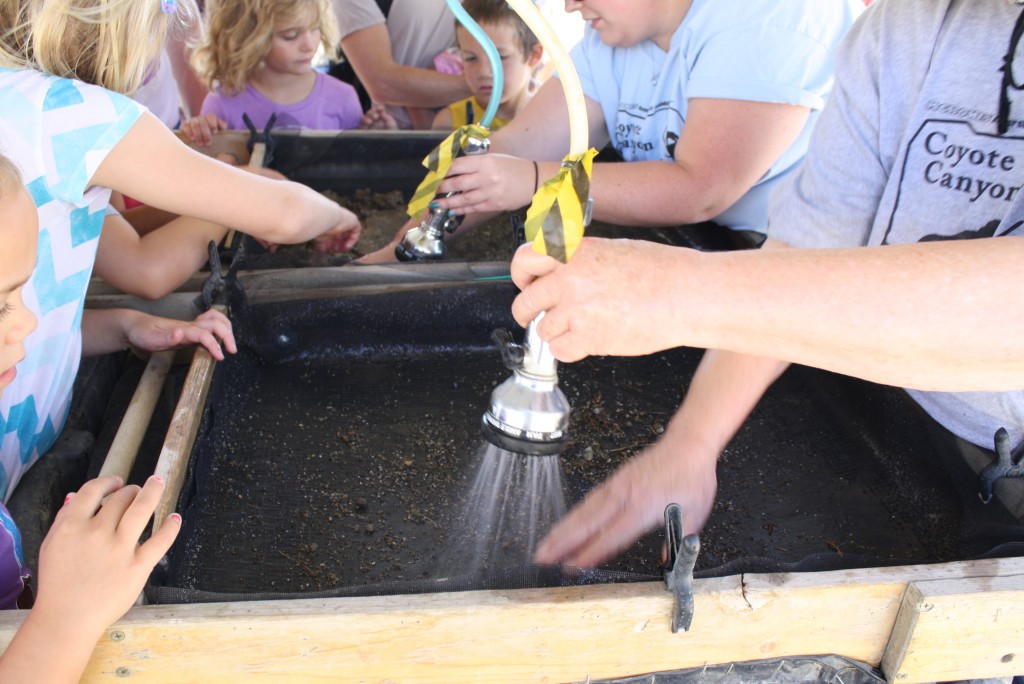 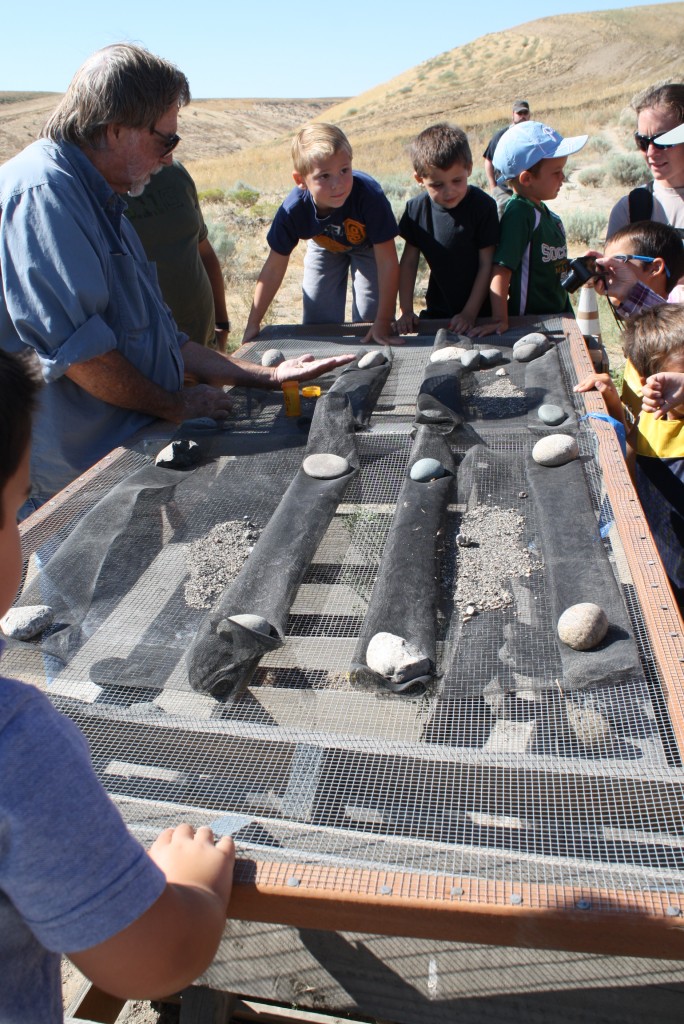 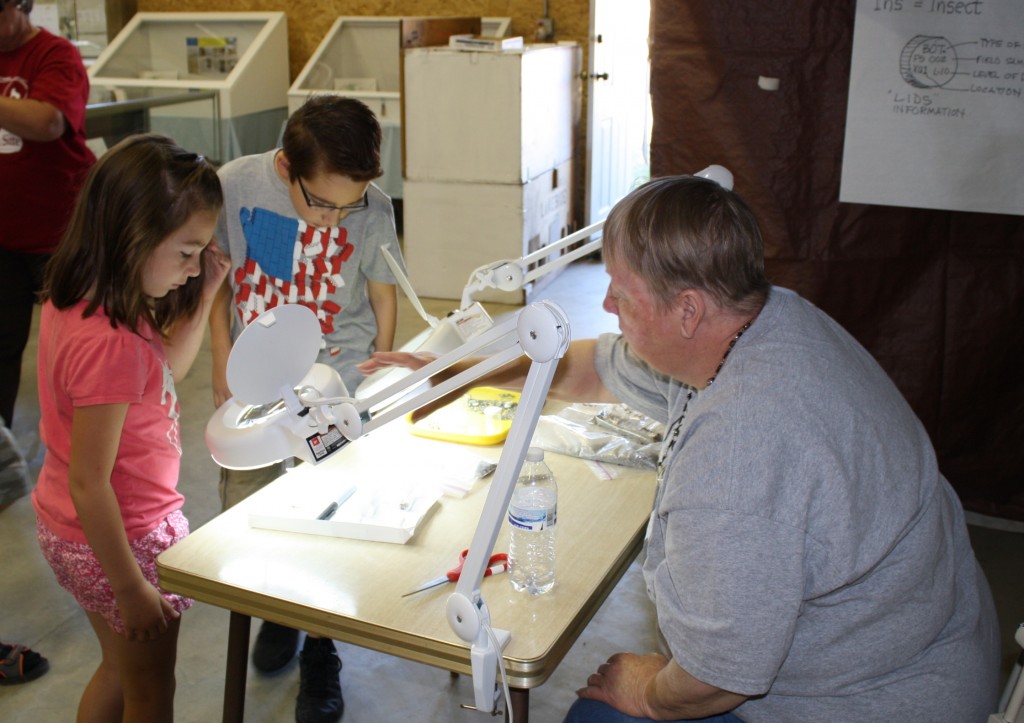 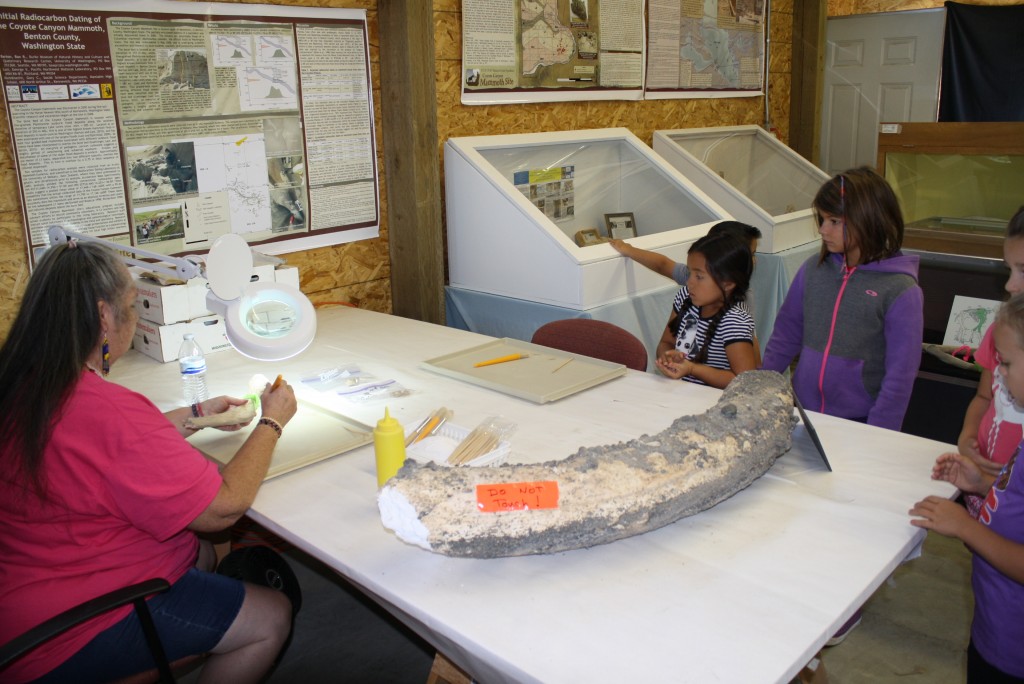 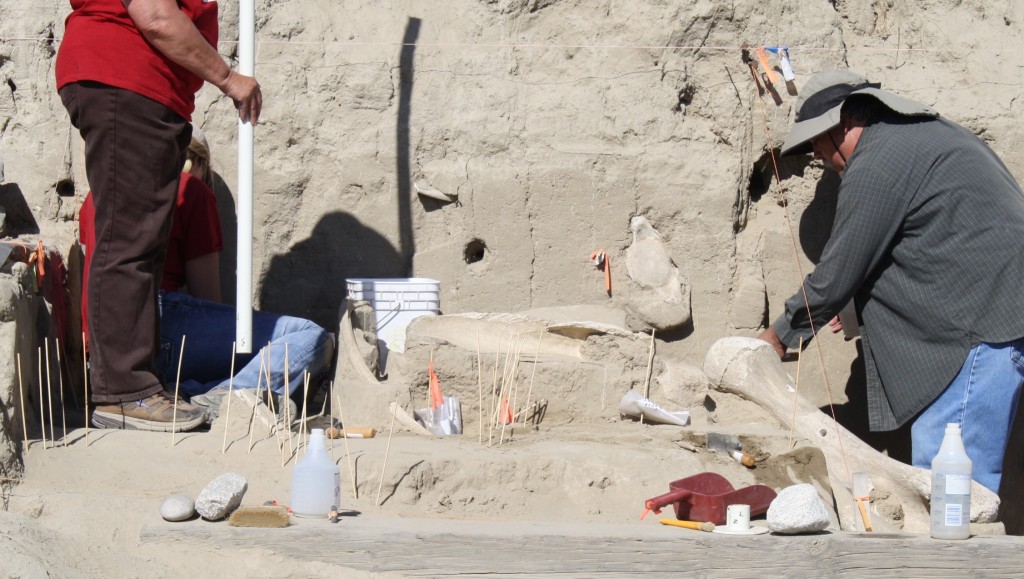 Close up of current findings: Humerus, Scapula to the left, Vertibra in the back wall 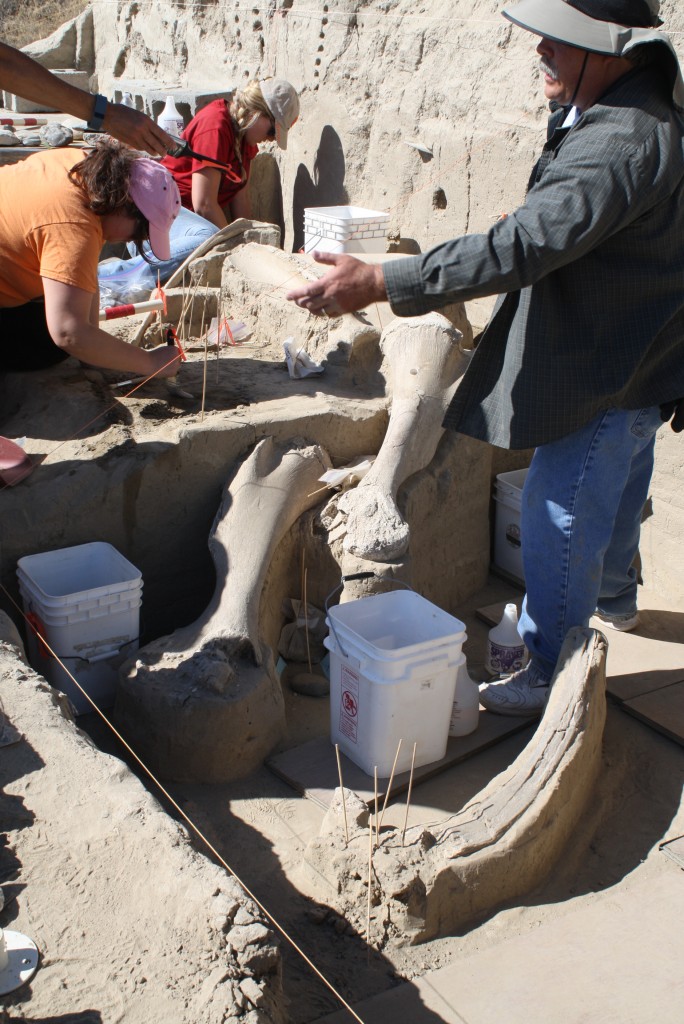 Close up of two humeri and a rib bone

So far the findings from this site have provided data for several poster presentations at various scientific meetings such as the Geologic Society of America and the Northwest Scientific Association. 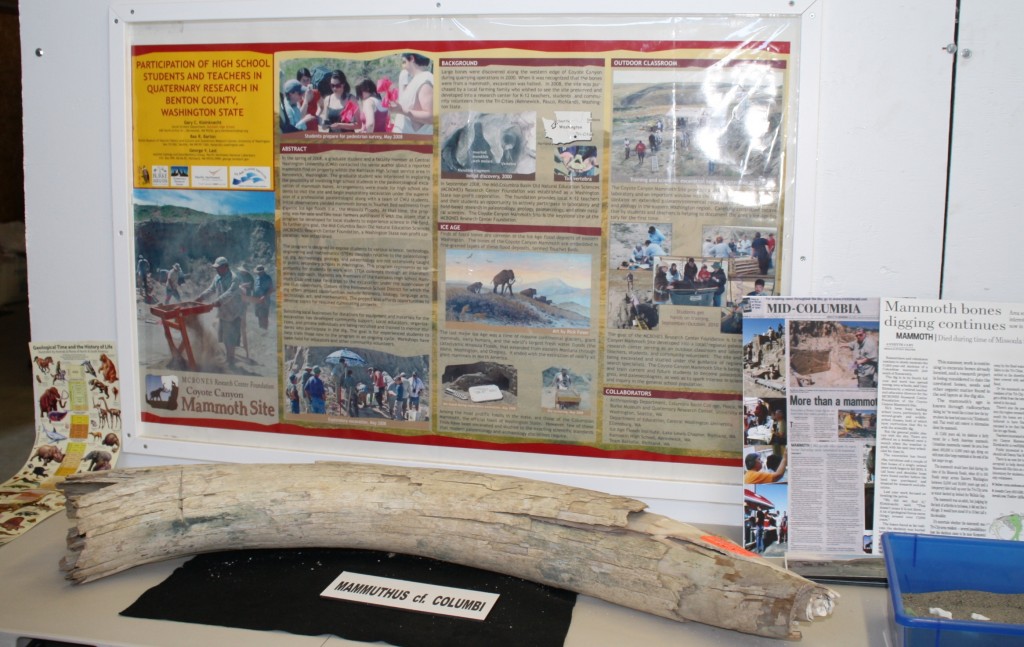 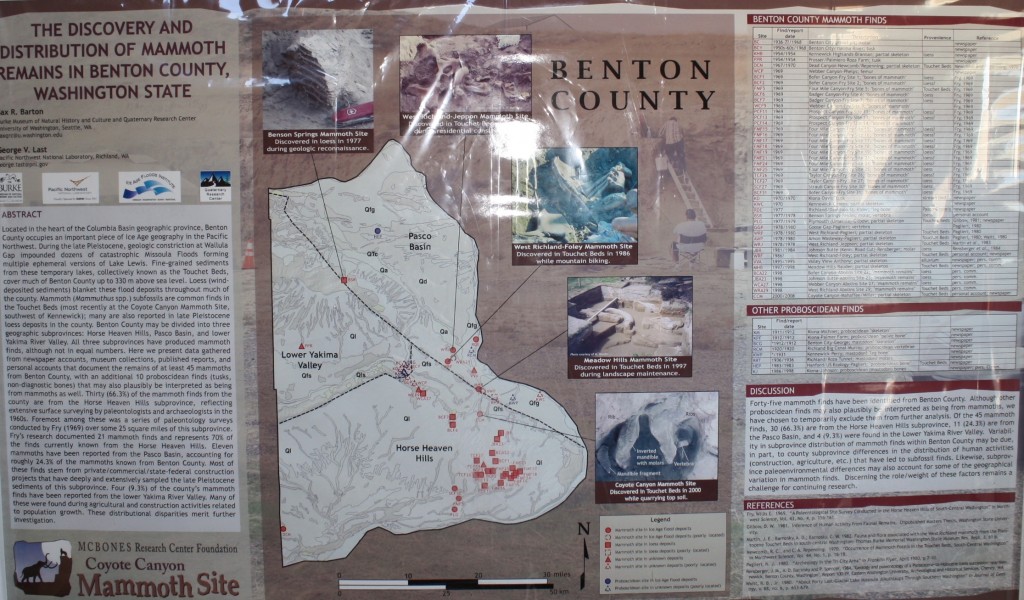 Although as noted above, Mammoth remains are not rare in Washington State, this particular dig stands out in that it is so well documented and that its goal is not simply to dig up some old bones. Rather it is highlighted as an institution providing an outdoor laboratory in which to involve community members, teachers, and students in an ongoing example of how the scientific method is used to examine, explore, and describe the area’s ancient history. By the time the task is complete, thousands of K- 12 and college students, as well as teachers and community members will have observed this process and many will have gotten their hands dirty in the dig. They will have participated in detailing the paleoecology of all the flora and fauna that lived here as well as the geologic history of the area. This is truly a community based science education project.

http://www.nwptv.org/watch-video/access-northwest/mcbones-coyote-canyon-mammoth-site/ (A three part TV documentary on the dig site)

(for tours of the site, call the numbers in the above brochure)