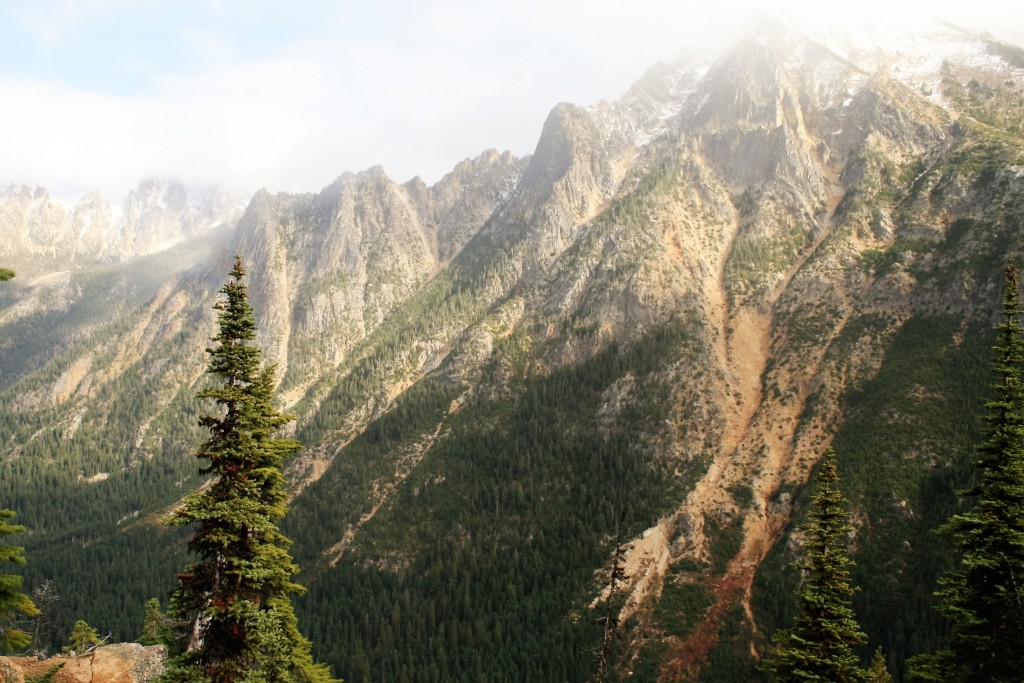 The North Cascades Highway follows State Route 20, that stretches from the Olympic Peninsula near Discovery Bay, across Puget Sound over ferry routes, up and over the Cascade Mountains, and terminates at the Idaho border. Due to the height of the highway (Washington Pass at 5,477 feet), along with the pacific moisture and precipitation, it is closed about five months of the year. The Highway typically opens in April and closes in November although there have been a drought years when it did not close at all. The mountains are currently getting good snow so it is likely to close soon.

The North Cascades national Park and the Cascades Loop Highway

Once over the mountains and the Columbia River is reached, the Cascade Loop follows the river south on US 97 to Wenatchee where it meets U.S. Highway 2 going west and over Stevens Pass to return to Western Washington and complete the loop. This North Cascades route was originally the corridor used by local Native American tribes as a trading route from Washington’s Eastern Plateau country to the Pacific Coast more than 9,600 years ago. It opened as a cross state highway in 1972 as the first National Scenic Highway in the United States, after over 100 years of planning. Appropriately I think, it has been called: “The Most Beautiful Mountain Highway in the State of Washington.” In addition to the monster mountains, rivers, and streams, the North Cascades National Park boasts 1,600 plant species, more than any other National Park. Of course all the water helps out. The trip began traveling east following the Skagit River up into the mountains, soon to enter North Cascades National Park. Along the lower part of this route is some of the best eagle watching territory in the winter following the salmon spawn. 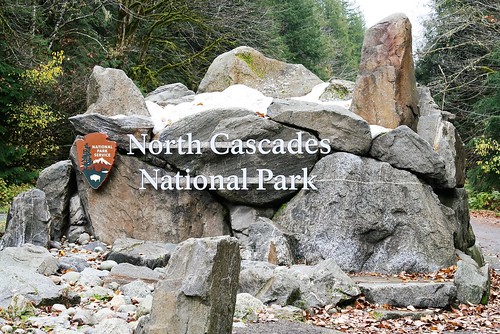 Entering the Park the mountains loom over the terrain but often there are power lines in the foreground that remind us that we are still in the civilized world – we need electricity. 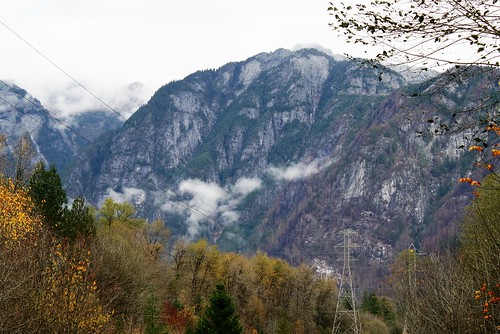 Mountains loom over power lines that are part of the Seattle City Light Hydroelectric project Driving toward the Park’s Visitor’s Center, the scarred and blackened trees and undergrowth from the summer’s fires were startlingly apparent. The first fire remnants that I encountered on this trip were from the Goodell fire that closed the entrance to the Park, the visitor Center, the community of Newhalem, and the dams that make up the Skagit River Hydroelectric Project, run by Seattle City Light. The following photos show some of the fire damage, even getting down to the highway. 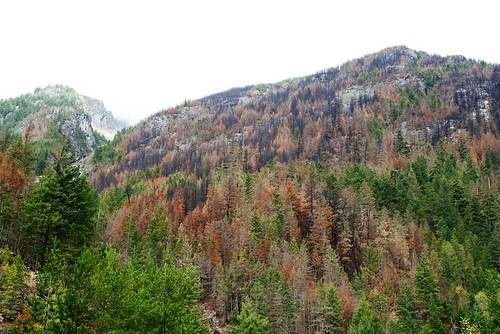 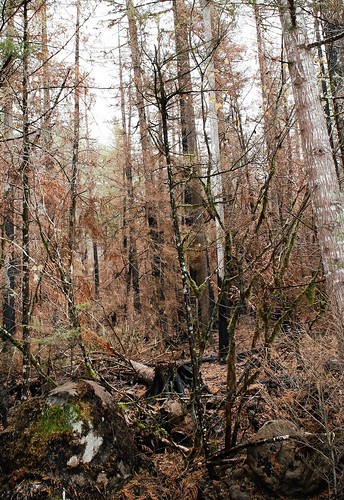 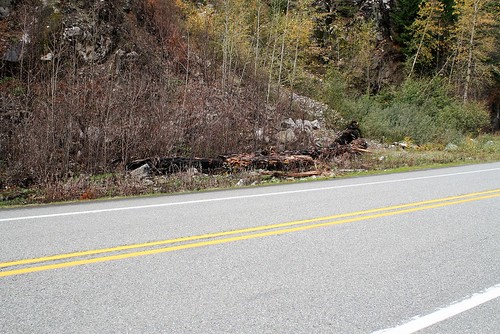 This hydroelectric project has three dams on the upper reaches of the Skagit River, all within the National Park boundaries. The first is Gorge Dam, built in 1924. The second, Diablo Dam was built in the 1930. At 389 feet, Diablo was the highest dam in the world for six years. The third is Ross Dam and its reservoir, Ross Lake that backs up water 25 miles north protruding well into Canada. These three dams were also closed and their associated personnel were evacuated during the August fire. 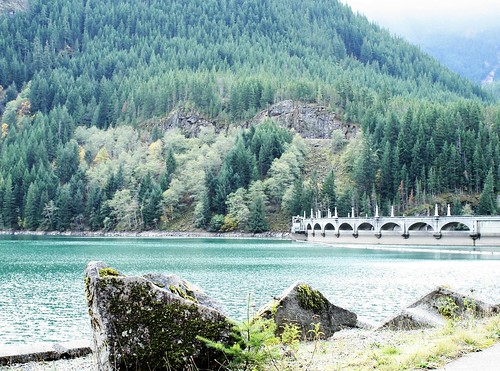 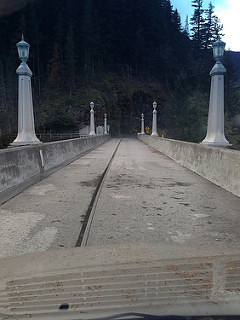 Diablo Dam and its emerald waters, Driving across the dam.

Moving on up the pass there are many spectacular sights but the most imposing and majestic rise above Washington Pass which sits at 5,477 feet. Towering above the Pass is Liberty Bell mountain which rises another 2,300 feet. To the South of Liberty Bell are two spires, called Early Winters Spires, both seen here cloaked in the clouds. (I recommend that you check the links here for some magnificent views of these peaks without the mist and clouds.) 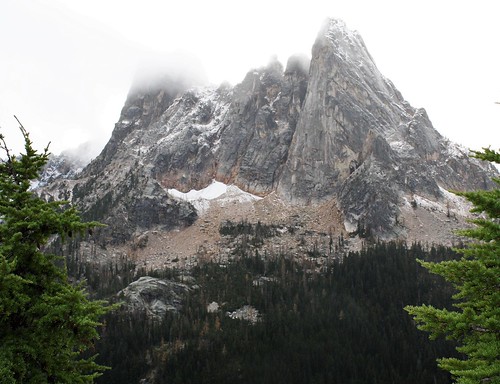 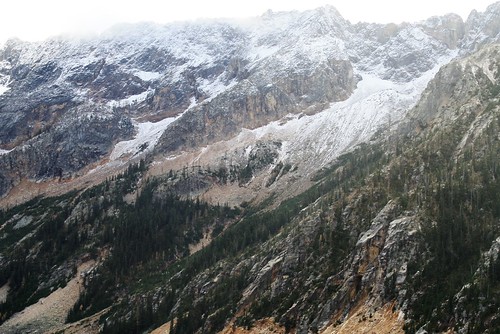 The National Park itself boasts over 300 glaciers, more than any park in the contiguous 48 states. Further, more than half the glaciers in the lower 48 states are concentrated within this North Cascades wilderness region.

The US Forest Service has posted poems at various lookout points over the pass. The forest service commissioned William Stafford to write these poems specifically to commemorate this awe inspiring scenery of the North Cascades.

The spring 2006 issue of this newsletter featured a cover story titled “The Methow River Poems: More Than A Roadside Attraction.” It told how in 1992, a year before his death, William Stafford was commissioned by the Forest Service to provide a series of poems that fit the high Cascades landscape and could be “posted” at various points along the river highway. This collection of poems turned out to be the last complete body of work that William Stafford produced, and the one he infused with perhaps his greatest passion. 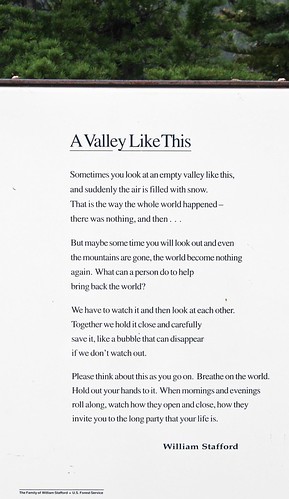 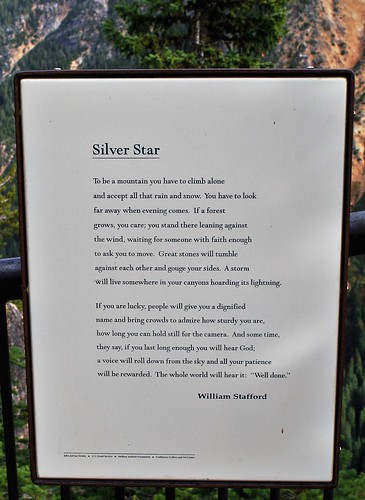 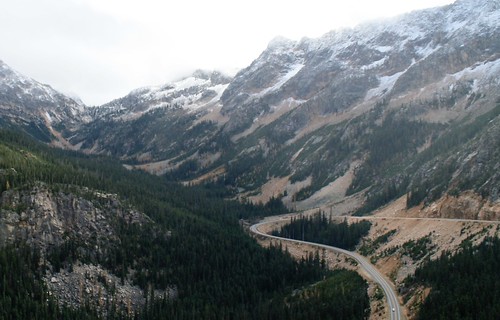 From Washington Pass the highway descends rapidly into the Methow Valley where it follows the Methow River to the Columbia. Reaching the Columbia, the North Cascades Loop joins US 97 heading South to Wenatchee where it joins US 2 heading West over Stevens Pass. Stevens’ Pass is not as high as The North Cascades, rising to just over 4,000 feet. The East side of the pass follows the Wenatchee River up into the Mountains. Here are a few photos from the trip back across the Cascades to Western Washington. As you will see, the rain followed over the pass too. 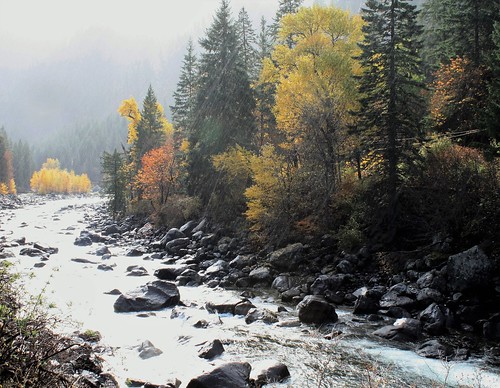 River with fall color accents in the rain 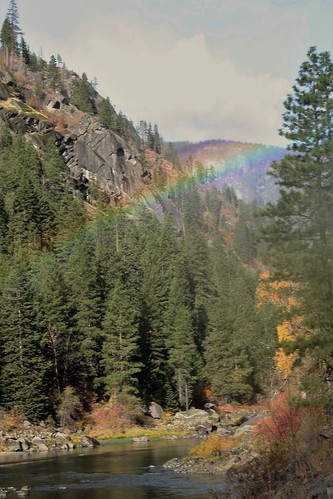 The Wenatchee River as the sun peaked out for few seconds 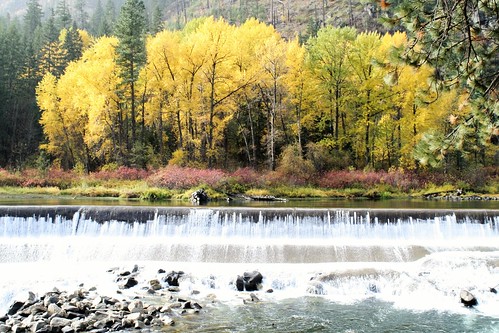 Fall color across a dam

These mountains are fairly old and are composed of a potpourri of rock sources including some from each basic rock origin: igneous, sedimentary, and metamorphic.

The North Cascades record at least 400 million years … in the history of this restless Earth-time, enough to have collected a jumble of different rocks. The range is a geologic mosaic made up of volcanic island arcs, deep ocean sediments, basaltic ocean floor, parts of old continents, submarine fans, and even pieces of the deep subcrustal mantle of the earth. The disparate pieces of the North Cascade mosaic were born far from one another but subsequently drifted together, carried along by the ever-moving tectonic plates that make up the Earth’s outer shell. Over time, the moving plates eventually beached the various pieces of the mosaic at a place we now call western Washington. 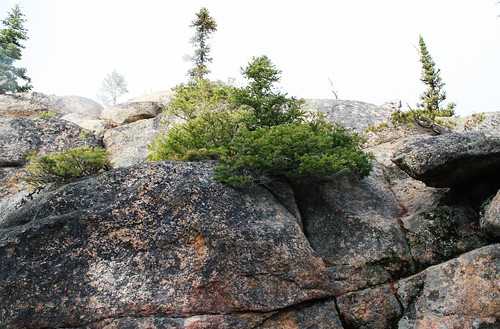 More recently, the Juan de Fuca plate pushing under the North American plate gives rise to the range and to its volcanic activity as part of the Pacific Ring of Fire. There are 14 volcanoes in the Cascade Range stretching from Mt. Garibaldi in BC to Mt. Lassen in northern CA. Many are still volcanically active including Mt. St. Helens, Mt. Baker, Glacier Peak, and Mt. Rainier for examples. The majority of the rocks making up this range are granitic in nature including tonalite and granodiorite.