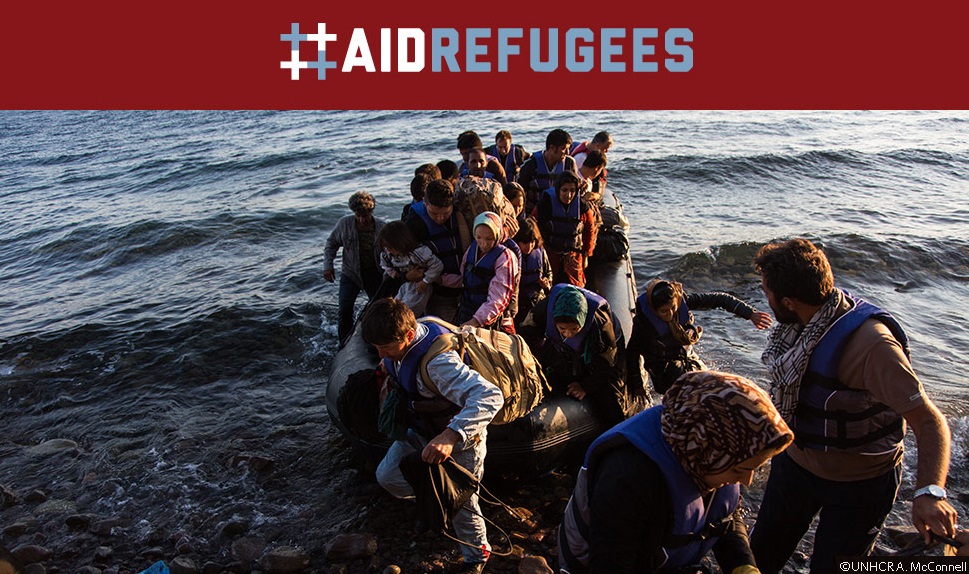 The last minute rejection of the Syrian refugee family by Indiana Gov. Mike Pence (R) is a lot of things (many of which involve curse words) but it should not be used to build court test cases that will only turn these families into victims once again.

Some people are upset that the agencies “gave in” and resettled them elsewhere (thank you, Connecticut!) rather than sending them to places where they are not wanted and would likely be treated badly. People are not symbols, they are flesh and blood and they deserve to be treated well:

[Resettlement agency] Exodus could have stuck to its guns and refused to arrange for the refugees to be redirected. That might have forced a showdown with the state government, if Pence continued to insist the state could prevent refugees from entering. More likely, though, Exodus would have had to resettle the family in Indianapolis on its own — without help from state social services.

The director of the New Haven refugee organization told the Times, “By diverting this family, we don’t want to set a precedent.” […]

The Obama administration could alleviate the resource crunch by sending non-Syrian refugees to states that reject Syrian ones — but that would be a tacit acceptance of the governors’ refusal, something President Obama doesn’t seem willing to countenance.

No, just no. THAT would be a worse precedent, allowing the states to legally discriminate based on religion and country of origin.

What we should do is to ask the State Department to add another criteria to their resettlement process: do NOT send them to states run by politicians who engage in unwelcoming rhetoric. It is a simple test, look for the “R” after their names.

The White House has some more concrete ideas …

How you can get involved:
Under President Obama, the U.S. has provided $4.5 billion in humanitarian assistance to help meet the urgent needs of those affected by the conflict, making America the world’s leading provider of much-needed aid. We are also increasing the number of Syrian and other refugees we admit from around the world on an annual basis to 100,000 in the next two years.
But this isn’t just about what a government can do. It’s about what every single one of us — as a citizen, a company, or an organization — can do to make sure that those displaced or impacted by this crisis have everything they need to survive and find safe haven.

When first arriving, many refugees face the difficult task of starting a new life in a new country. As with prior generations, they are rising to this challenge with the support of a network of refugee-serving organizations located in communities across the country. These organizations provide vital services including: meeting refugees at the airport upon arrival; arranging for housing, food, and clothing; providing cultural orientation; and assisting with access to other social, medical, and employment services.

Click this link to view a map of organizations helping: Enter your zip code into the map to see where you can learn about volunteer opportunities with organizations near you that are helping refugees start anew in your community.

Clouds Over Sidra: A Virtual Reality Documentary on the Syrian Refugee Crisis
Delve into the world of a 12-year-old girl who fled Syria with her family and is living in a refugee camp in Jordan. You can click on the video to get a 360-view of what it’s like to live as a refugee and see the toll this conflict is taking on so many from her eyes.

ZERO: The number of Syrian refugees that have resettled in the U.S. that have been arrested or removed on terrorism charges. We can welcome refugees and ensure America’s safety and security. Slamming the door in their faces would betray our deepest values, and it’s not what we’re going to do. Get the facts at go.wh.gov/RefugeesWelcome.

*The zero is from these starting points:
– 23,092 Syrians who UNCHR has referred to the United States Refugees Admission Program
– 7,012 Syrians who were interviewed by the U.S. Department of Homeland Security since fiscal year 2011
– 2,034 Syrian refugees admitted since FY 2011
And no, this is not a typo:
– 0 settled Syrian refugees who have been arrested or removed on terrorism charges.

Zero, zilch, nada. Or exactly 289 fewer than the number of United States House of Representatives members who voted to halt the resettlement program including 47 cowardly Democrats.

20 comments for “These are people, not symbols – UPDATED with pesky facts”