Yesterday’s domestic terrorism incident at the Planned Parenthood clinic in Colorado Springs generated a cornucopia of right-wing canards (do not cook and eat them, they are poisonous!). 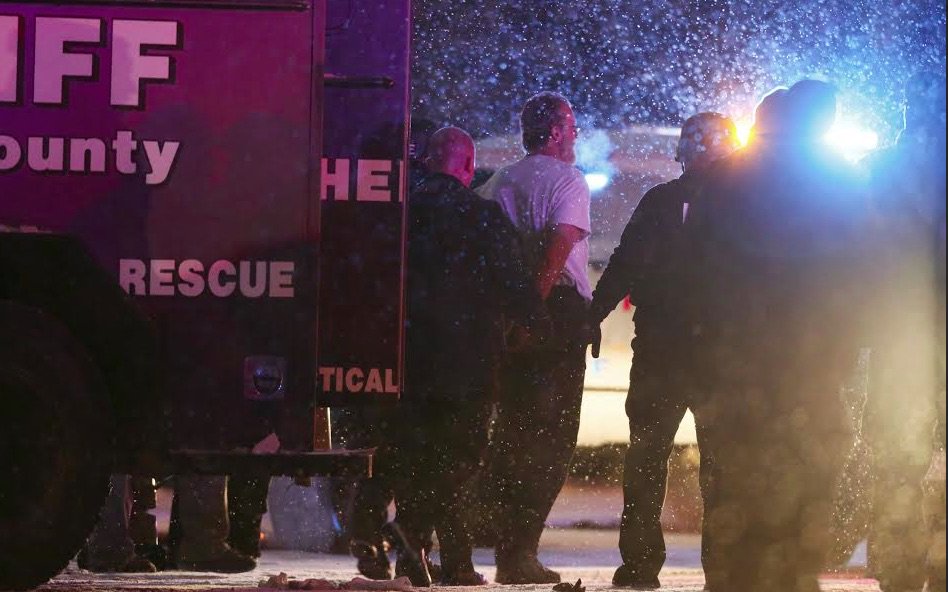 Here’s one! From a congressman … who CNN decided they should have on LIVE TV while the terrorist was still active in Colorado Springs (“CNN: When we can’t be bothered reporting the news, we just make stuff up!!”):

[Rep. Adam Kinzinger (R-IL) had no problem] diagnosing the motives and influences of the shooter. “This is a person that has a mental health issue, that is to some level psychotic and crazy,” Kinzinger said. He also said the shooter could have had a “legitimate disagreement” with Planned Parenthood.

Aha! This kind of “legitimate” disagreement?

“We saw these barbaric videos, and that was something that many of us have a legitimate concern about,” Kinzinger said.

He demanded an apology from Planned Parenthood for even suggesting that the terrorist may have been inspired by the anti-woman jihadists in Congress:

“We don’t yet know the full circumstances and motives behind this criminal action, and we don’t yet know if Planned Parenthood was in fact the target of this attack. We share the concerns of many Americans that extremists are creating a poisonous environment that feeds domestic terrorism in this country.”
– Vicki Cowart, President and CEO of Planned Parenthood of the Rocky Mountains

And it is that poisonous environment, fueled by right-wing lies and enabled by Republicans in Congress that has given people like the terrorist in Colorado Springs permission to kill. Maybe there is a mental illness, Congressman, Planned Parenthood Derangement Syndrome – PPDS, with its roots in centuries of misogyny and women as property and reinforced by this terrorist organization: 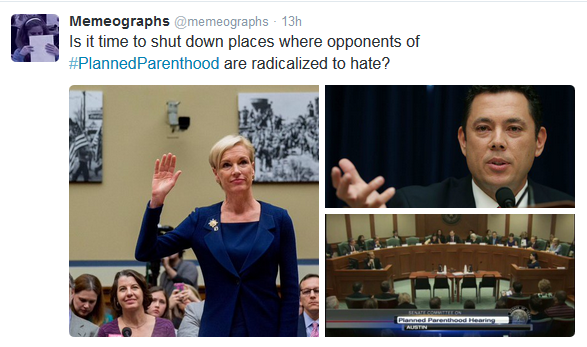 Own this, Republican Congressmen. You and your party have blood on your hands.

Meanwhile, the sounds of silence from the GOP presidential candidates is deafening:

Approximately 10 hours after a gunman went on a shooting rampage at a Planned Parenthood clinic in Colorado Springs, Colorado, only two presidential candidates have issued statements expressing support for either the three victims or the women’s health organization.

Hillary Clinton @HillaryClinton
Today and every day, we #StandWithPP.

Bernie Sanders @BernieSanders
We proudly #StandWithPP of Colorado Springs and the brave law enforcement personnel who fought to protect it.

p.s. You can Stand with Planned Parenthood also:

Missing from the list of canards, however, was “just one good guy with a gun can stop a bad guy with a gun”. Maybe it was because there were probably 100 good guys with guns trying to stop this one guy. Or maybe because our right-wing media has people so poisoned that they believe that this was not such a bad guy?

There was a sense of outrage on Twitter yesterday over not just the terrorizing of women and health care providers but the stark contrast between the images we see daily of people of color being gunned down and then a white man who just killed a cop walking out of a building with his hands up and being taken quietly into custody (I wonder if they took him to Burger King on the way to the jail?) . The outrage was not that the killer had not been shot dead (no reasonable person wants that) but the fact that in America right now there are two types of justice: one for people who look like your hunting buddy and one for The Other.

A few hours of Tweets:

Cecile Richards ‏@CecileRichards
We will never back away from providing care in a safe, supportive environment that millions of people rely on and trust.

Eric Wolfson ‏@EricWolfson 15h 15 hours ago
#ThatAwkwardMoment when you try to prove you’re pro-life by opening fire on a Planned Parenthood facility.

Adam Weinstein ‏@AdamWeinstein 11h 11 hours ago
Thank God he wasn’t a black teen ambling up the street with no guns, they might’ve had to shoot him 16 times

Angela Mary Claire ‏@AngeMaryClaire 11h 11 hours ago
If anyone is wondering how you can be pro-life and shoot people, it’s not pro-life, it’s anti-choice. #PlannedParenthood

Jesse Benn ‏@JesseBenn 12h 12 hours ago
#PlannedParenthood gunman shoots four cops. Puts his hands up, isn’t shot. This is why white people think the system works. It does for us.

No word yet on whether or not this woman gave up waiting. I hope so!

Lisa Rowe ‏@txvoodoo 12h 12 hours ago
And he didn’t even have to say “hands up, don’t shoot.” Whiteness is a shield.

John ‏@linnyitssn 12h 12 hours ago
If this idiot at Planned Parenthood is an angry Pro-Lifer, then hate and lies spread by the GOP are the cause of this.

Connie Schultz ‏@ConnieSchultz 12h 12 hours ago
I am sorry to so often have to think of #PlannedParenthood staff and volunteers as brave, but so grateful to know they are. #StandWithPP

Zeddonymous ‏@ZeddRebel 12h 12 hours ago
Watch out for people assuming he was a loner. Tiller assassin Scott Roeder had ties to Op Rescue, Army of God and the Montana Freemen.

Molly Manglewood ‏@undeadmolly 13h 13 hours ago
If you ask me it’s pretty selfish of gun shot victims to put conservatives’ gun collections at risk by getting shot by guns all the time.

TC ‏@tchop_stl 13h 13 hours ago
Can you imagine CNN interviewing an ISIS propagandist hours after the Paris attacks & giving him credibility like they did @AdamKinzinger?

Joan Walsh ‏@joanwalsh 13h 13 hours ago
Waiting for apology from @RepKinzinger for saying @PPact was wrong to claim it was the shooter’s target.

Jane Doe, MD ‏@DrJaneChi 14h 14 hours ago
Every violent attack on Planned Parenthood or any abortion provider is a terrorist attack on the availability of legal abortion.

Hunter ‏@HunterDK 15h 15 hours ago
We still don’t know if this is an anti-abortion terrorist or just one of the other terrorists that regularly murder Americans for reasons.

Sarah Kliff ‏@sarahkliff 15h 15 hours ago
Statement from the brother of a Planned Parenthood patient.

Note: He was later reunited with her.

Dean Obeidallah ‏@Deanofcomedy 15h 15 hours ago
6 people now confirmed shot in Colorado Springs -damn victims if only they had been armed! Oh yeah, 3 were cops and were armed. Ooops NRA

Mrs. Betty Bowers ‏@BettyBowers 15h 15 hours ago
Remember all the right-wing Tweeters imploring us “wait until all the facts are in” before guessing Paris shooters’ religion? Me neither!

And this. Law enforcement does not respect that laws are broken when terrorists attack women’s clinics. And until they do, this will keep happening, there will be more loss of life and, eventually, women will be afraid to go to a clinic to get cancer screening or birth control pills or … yes … abortions.

ClinicEscort ‏@ClinicEscort 16h16 hours ago
In short, lots of ppl who violently attack clinics started out as protesters, escalated to vandalism, & then leveled up to guns, bombs, etc.

Here is a Storify by Michelle Kinsey Bruns (@ClinicEscort) about violence at Planned Parenthood clinics:
“Vandalism” at Abortion Clinics Is So Much More Than That