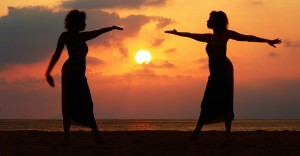 It was late summer again, time for the yearly gathering on Serafina’s property. This year the gathering would fall on Celine’s birthday, the first of August. As she packed her large beach bag she shivered in anticipatory delight—she looked forward to this occasion all year.

Into the bag went a flashlight, sunscreen, a beach towel, flip-flops, and a sun visor. No book would be necessary for the sunbathing part of the day, because the company would be so congenial she’d spend her time chatting. She added a pashmina—the evening was always chilly with the breeze coming off the water—and filled her water bottle. She was ready.

The large cooler filled with ice and soft drinks was already in the trunk of her car, as were the fruit and crackers she was bringing for snacks. Serafina, of course, would be cooking up a storm of both Puerto Rican and African-American specialties. Celine smiled as she thought of the arroz con gandules, rice with pigeon peas, that was her friend’s signature dish. She was planning to eat lightly all day so she could give the evening feast the attention it deserved.

The hour-long drive passed pleasantly as Celine, always analytical, contemplated why this yearly celebration meant so much to her. For one thing, no men would be present. There would be no need to appear deferential to male sensibilities, no need for the women present to refrain from speaking their truths around the fire circle: everyone could say whatever she damn well pleased. The best part of being with other women, Celine thought, was that one didn’t have to explain anything. Women already knew.

She smiled again as she drove on and the miles ticked away on the odometer.

Tashkent Auset was also looking forward to the gathering. Awakened as usual by cockrow, she had risen with the dawn, gone out to feed the roosters, hens, and goats, and prepared breakfast for herself and the children. Later she dropped off six-year-old Nico and three-year-old Yana at her mother’s house before setting out on her journey to Serafina’s beach property.

Jannah, previously her divorce lawyer and now her friend, had told her a great deal about the gatherings of previous years. “Only women of color attend,” Jannah said. “No white people, no men. We can be ourselves.”

It sounded wonderful to Tashkent Auset. Ordinarily shy in company because she lacked money, social position, and advanced degrees, she knew she’d feel comfortable even though most of the women present would be strangers to her. Among other women of color there would be no one to disparage her dark skin, her homemade clothes, her lack of cosmetics. There would be no need to be careful of what she said for fear of offending white people’s feelings or disturbing their comfortable stereotypes.

Driving the rattletrap car she’d acquired after the divorce,Tashkent Auset sang as she drove to the gathering place. She hoped the other women would like the brownies she was bringing to the feast.

An hour earlier Jannah, too, had set off in her sleek little Morris Minor to Serafina’s place. In the trunk of her car was a cooler full of fried chicken—a cliché, Jannah thought dispassionately, but nonetheless delicious for all that—and a blueberry cake she’d made because it traveled well and required no messy frosting that would melt in the heat. She was looking forward to seeing the people she knew would be there—Celine, Serafina, and Tashkent Auset, for instance—and women she didn’t even know yet. It had been a tiring year so far, with one difficult case after another, but this weekend would be her time to swim, eat, dance, and thoroughly enjoy herself.

Laughter, talk, and music filled the air as twenty-three women of all ages and stages of life found places to stretch out on the sand, dash shrieking with delight into the waves, and sample the food and drink available. Someone was playing the flute; Tashkent Auset, who taught belly dancing in the town nearest her farmette, demonstrated a few moves to loud applause.

The older women delighted Celine. Some of them simply shed their clothes and walked into the waves, heedless that in the outside world they would have been judged harshly for possessing pendulous breasts and sagging stomach muscles. They are the mothers, the nurturers, Celine thought. They’re proud of their femaleness. Those breasts fed babies who grew up to have a better life than they did. She smiled and waved at the older women as they came out of the waves and walked slowly back up the shingle, there to retrieve the loose dresses they had worn earlier.

Jannah, feeling completely wrung out from the week she’d had, chatted briefly with Celine, Tashkent Auset, and Serafina. After helping the latter carry around the bottles of drinks, she spread out her blanket on the sand, set up a beach umbrella, and lay down. She’d meet the other women at dinner and learn more about them at the fire circle. For now, though, as the heat and the soft shushing of the waves began to work their magic, she’d simply drift off to sleep.

Tashkent Auset wanted to meet all the other women right away. She went around introducing herself, first to Collette and Nyla, who apart from herself were the youngest women present, then to Zenobia, Collette’s grandmother, and Serafina, the hostess. She hadn’t yet met all the women when Serafina asked her to help set up the long table for the buffet dinner.

“What’s this?” Tashkent asked with interest, studying the contents of the large bowl that Serafina placed in a larger bowl of ice on the table.

“That’s ensalada con bacalao,” Serafina said. “Codfish and avocado salad. Be sure to try it!”

As the shadows began to fall the women feasted on the collard greens, potato salad, candied yams, and corn pudding that accompanied the main dishes, washing the food down with wine, beer, or lemonade. Afterwards coffee and tea were on offer, along with Tashkent’s brownies, Jannah’s blueberry cake, and Serafina’s caramel custard.

“Time to light the fire and pass the talking stick!” Serafina called.

The fire, already laid, was quickly lit and the women sat down around it. Serafina, her gray hair wispily escaping from its bun, a smile creasing her wrinkled face, was the first to speak.

“I am Serafina, founder of this gathering along with Celine here. We were part of the Young Lords and the Black Panthers in the nineteen sixties. We make it our business to love and support our sisters and continue our activism. Tonight we welcome three young women—Collette, Nyla, and Tashkent Auset—to our circle, in the hope they will continue the tradition. Collette, I pass the talking stick to you.”

“Good evening, sisters,” Collette said, as she took the sagebrush stick into her hands. “I am Collette, granddaughter of Zenobia. I’m a social worker and civil rights activist.The woman who has inspired me most is Angela Davis. She’s had a long career in scholarship and activism and now works on abolishing the prison-industrial complex. Nyla, I pass the talking stick to you.”

Nyla took the talking stick, shook back her long braids, and began. “I am Nyla, studying African-American history and culture. Celine is my professor. The woman who inspires me is Fannie Lou Hamer, a voting rights activist who helped organize the Freedom Summer in Mississippi in 1964. Tashkent, I pass the talking stick to you.”

Tashkent Auset spoke of Augusta Savage, artist, teacher, and activist. Others spoke of Maya Angelou, Shirley Chisholm, Audre Lord. When the talking stick passed to Celine, she said, “I’m Celine. I teach women’s studies and African-American studies, as you’ve heard from Nyla. The woman who inspires me most is Oba Tero, a Yoruban slave who was brought to Cuba in the 1840s. She was one of the founders of Santeria, the real name of which is Lucumi. Although the Yoruba in Africa were patriarchal with regard to chiefs, women governed everyday life, so Lucumi is really a women’s religion.That’s why many of us are emphasizing its feminist aspects and the feminist nature of the Orishas.”

“Ah, the Orishas,” Jannah said as the talking stick passed to her. “My name is Jannah. I’m a lawyer and I volunteer at the women’s center in my area. I was brought up Muslim but I’m open to new ideas, and as a feminist I appreciate the Orishas: Yemaya, queen of heaven, earth, and the waters; Oshun, the Orisha of beauty, sensuality, and femininity; and Oya, the female warrior who wields lightning. There are other Orishas, but those are the major female ones.”

“Thank you, sisters,” Serafina said as Jannah finished speaking. “And now it’s time to dance! Our drummers tonight are Bagheera, Zenobia, and LaTisha.”

The drummers moved beyond the fire circle and began to tap the drums softly. As the fire burned higher, the drumming—as primal, as ancient as the human heartbeat—urged the women to stand up and feel the music. As the tempo increased the feet of the women beat joyfully against the earth; they danced faster and faster. The energy felt electric as the music possessed the women; finally, one by one they dropped down to the earth, wiping away perspiration as only one woman was left dancing around the fire.

As Tashkent Auset whirled and stamped, the light from the flames showed her high cheekbones and black hair, gifts from her Cherokee ancestors. The energy around her spread to encompass all the women, enveloping them in magic. As they watched Tashkent Auset her face became luminous: her dark eyes sparkled, her lips became full, soft, red; then her voice rang out, higher than its normal husky tone.

Abruptly Zenobia stopped drumming, her hands arrested mid-air. “You are Chosen! Chosen of the Orishas!”

Bagheera’s and LaTisha’s drums fell silent. Celine stood up and approached Tashkent Auset, who stopped dancing to stand, panting, as the sweat dripped down her face and arms.

“Blessed are you, Tashkent Auset, Chosen of the Orishas! If you wish, you can be trained as an oriate, one who conducts Lucumi rituals.”

Tashkent Auset smiled at Celine and the other women. Although her body was exhausted, she felt powerful, ecstatic to be chosen. “Thank you. I accept with reverence—and delight!”