Sometimes a newsfeed story leads to an Internet search and an unexpected gem.

That happened this morning.

NPR linked to a story in The Guardian about a group in Sweden which is passing out a book to every 16 year old in the country:

Less than a month after it was revealed that the UK is planning to drop feminism from the politics A-level, every 16-year-old in Sweden is being given a copy of Chimamanda Ngozi Adichie’s call to arms, We Should All Be Feminists.

The essay, adapted from Adichie’s award-winning TED talk of the same name, is being distributed in Swedish to high-school students by the Swedish Women’s Lobby and publisher Albert Bonniers. Launching the project at Norra Real high school in Stockholm this week, they said they hoped the book would “work as a stepping stone for a discussion about gender equality and feminism”.

Here is the TED talk.

“Some people ask: ‘Why the word feminist? Why not just say you are a believer in human rights, or something like that?’ Because that would be dishonest,” Adichie continues. “Feminism is, of course, part of human rights in general – but to choose to use the vague expression human rights is to deny the specific and particular problem of gender. It would be a way of pretending that it was not women who have, for centuries, been excluded.” 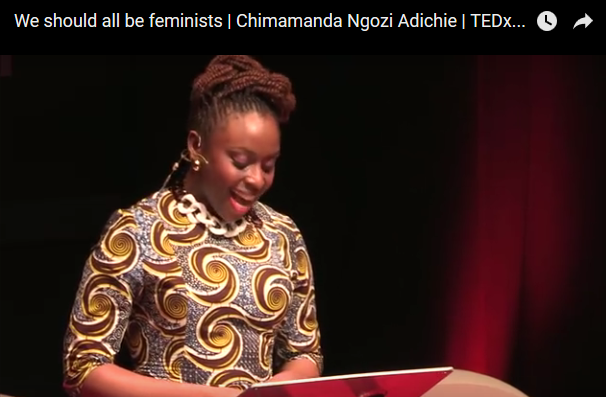 Who is Chimamanda Ngozi Adichie? From the TED video description:

Chimamanda Ngozi Adichie a renowned Nigerian novelist was born in Nigeria in 1977. She grew up in the university town of Nsukka, Enugu State where she attended primary and secondary schools, and briefly studied Medicine and Pharmacy. She then moved to the United States to attend college, graduating summa cum laude from Eastern Connecticut State University with a major in Communication and a minor in Political Science. She holds a Masters degree in Creative Writing from Johns Hopkins and a Masters degree in African Studies from Yale University. She was a 2005-2006 Hodder Fellow at Princeton, where she taught introductory fiction. Chimamanda is the author of Half of a Yellow Sun, which won the 2007 Orange Prize For Fiction; and Purple Hibiscus, which won the 2005 Best First Book Commonwealth Writers’ Prize and the 2004 Debut Fiction Hurston/Wright Legacy Award. In 2009, her collection of short stories, The Thing around Your Neck was published. She was named one of the twenty most important fiction writers today under 40 years old by The New Yorker and was recently the guest speaker at the 2012 annual commonwealth lecture. She featured in the April 2012 edition of Time Magazine, celebrated as one of the 100 Most Influential People in the World. She currently divides her time between the United States and Nigeria.)

A snippet from her book, courtesy of The Guardian:

While I was promoting [my novel, Purple Hibuscus] in Nigeria, a journalist, a nice, well-meaning man, told me he wanted to advise me. (Nigerians, as you might know, are very quick to give unsolicited advice.) He told me that people were saying my novel was feminist, and his advice to me – he was shaking his head sadly as he spoke – was that I should never call myself a feminist, since feminists are women who are unhappy because they cannot find husbands.

So I decided to call myself a Happy Feminist.

Then an academic, a Nigerian woman, told me that feminism was not our culture, that feminism was un-African and I was only calling myself a feminist because I had been influenced by western books. (Which amused me, because much of my early reading was decidedly unfeminist: I must have read every single Mills & Boon romance published before I was 16. And each time I try to read those books called “classic feminist texts”, I get bored, and I struggle to finish them.)

Ha! More at the link.

So what is a feminist. From Ms. Adichie when a friend called her a feminist:

I am a feminist. And when I looked up the word “feminist” in the dictionary that day, this is what it said: “Feminist: a person who believes in the social, political and economic equality of the sexes.”

My great-grandmother, from stories I’ve heard, was a feminist. She ran away from the house of the man she did not want to marry and married the man of her choice. She refused, protested, spoke up whenever she felt she was being deprived of land and access because she was female. She did not know that word feminist. But it doesn’t mean she wasn’t one. More of us should reclaim that word. My own definition of a feminist is a man or a woman who says, “Yes, there’s a problem with gender as it is today and we must fix it, we must do better.”

3 comments for “Chimamanda Ngozi Adichie: “We Should All Be Feminists””