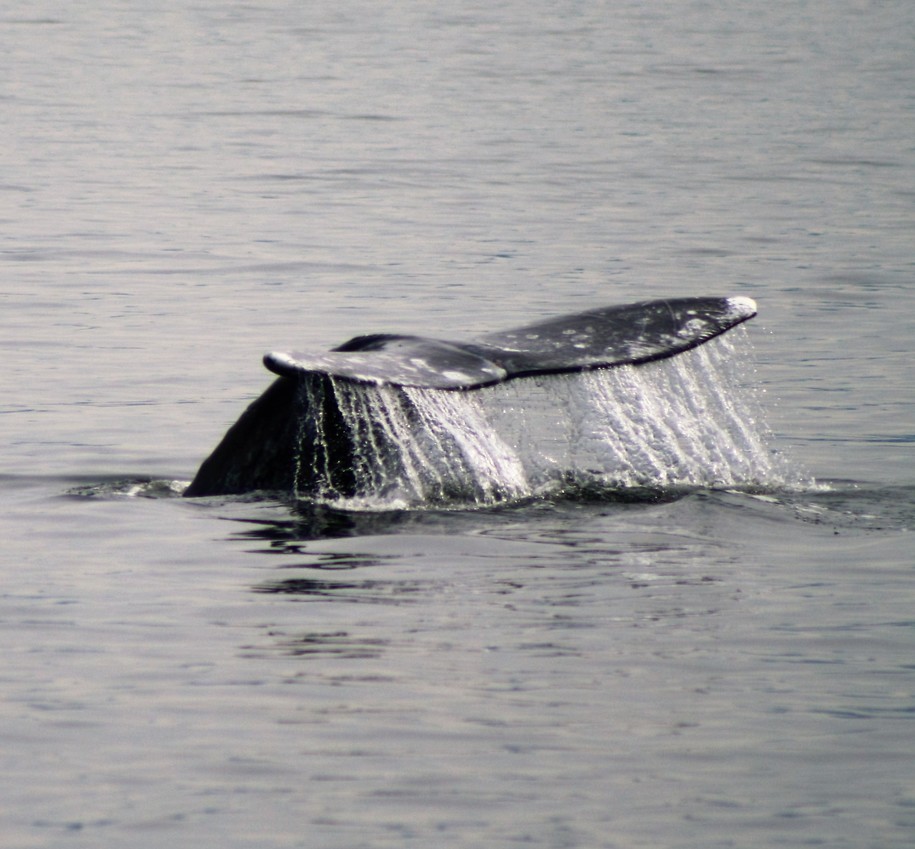 Gray Whale tail preparing to dive into the ghost shrimp infested mud at the bottom of the sound.

It is Cinco de Mayo and these whales are fresh out of Baja Mexico. So, how about some whales for a bit a diversion after a full day of “Trump this” and “Trump that …?”

Whales are so much smarter and better looking.

The Pacific Northwest has a tremendous array of aquatic wildlife but none more riveting or awe inspiring than the whales. In addition to our most iconic, the Orca, we also have Gray Whales and Humpbacks, both of which stop by the Salish Sea on their migrations to and from the Arctic. This post is based on my recent Gray Whale watching trip in April. 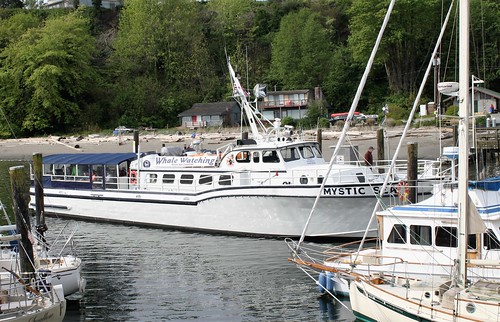 The Mystic Sea, our tour boat
Although the focus here is on the whales, I must say a word or two (brag) about the setting in which we were fortunate enough to view them. The whales chose and we followed them to a magnificent portion of Puget Sound/Salish Sea where they fed. They chose as their supermarket the relatively shallow waters off the south eastern end of Whidbey Island across Saratoga Pass to the nearby southern end of Camano Island. This area was bordered by the mainland and the city of Everett, just a few miles to the east. We were able to view these whales against the backdrop of three of Washington’s five volcanoes in the Cascade Mountains: Mt. Baker to the north, Glacier Peak to the East and Mt. Rainier to the South. Although we could see Rainier, it was rather hazy and did not come through on photos. Below are a few shots of the whales and the mountains. 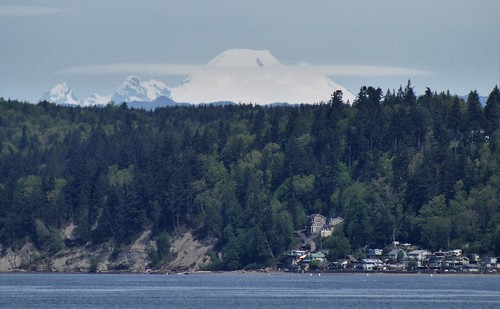 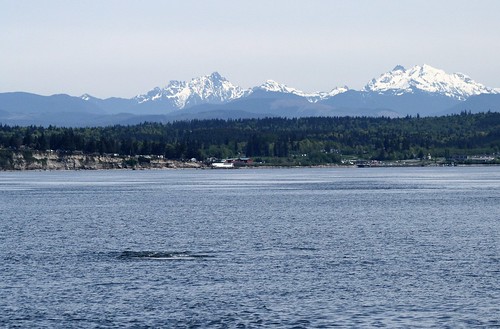 Like the Orca, these whales are also iconic in the Northwest Coast and have been integral to Native American/First Nations traditional way of life as a nutritious food source.  In addition to salmon and other fish, whales were hunted all along the pacific coast.  For example, the Makah tribe of the Olympic Peninsula have a long whaling tradition. Archaeological sites such as the one at Ozette on the outer Washington coast reveal deposits of humpback and gray whale bones and barbs from harpoons dating from 2,000 years ago.

When the white man came and took their land, they were “good” enough to grant the Pacific Northwest Indians some rights to their traditional fishing and whaling.  In the 1855 Treaty of Neah Bay, in return for huge tracts of their land, the Makahs were granted:

What a sweet deal they got — not.

The treaty was signed in 1855 and ratified by Congress in 1859. However, the Gray Whale was hunted to near extinction by the early 1900s.  Now that most of the world has stopped hunting them, the Eastern Gray Whales that travel along the west Coast of North America, are no longer on the endangered list as of 1994 and have become a preservation success story. This group now numbers at their estimated original population of around 20,000. However, a related group called the Western Pacific Grays, remains seriously endangered. This group migrates south along the Pacific coast of Asia and are referred to as Korean Stock. There might be as few as only 100 of these stock left.

This whaling tradition has resumed recently as the Makah Tribe successfully petitioned the International Whaling Commission (IWC) to have their treaty whaling rights returned since the whale population has rebounded. Having voluntarily curtailed whaling in the 1920s, in May 1999 they harvested their first whale in 70 years. They are currently allowed to hunt five whales per year for subsistence and cultural purposes sanctioned by the International Whaling Commission. Green Peace  and the Sea Shepard keep more than a watchful eye on these operations.

Gray Whales are not the largest of the cetaceans, but they are big enough. They run about 50 feet in length and weight around 80,000 lbs. Females are slightly larger than males. They are benthic feeders and do not have teeth but rather have baleen through which they strain organisms scooped from mud on the sea floor.

The Eastern Grays summer and feed in the North Pacific, (Bering and Chichuck Seas) and Migrate to Baja California, Mexico each fall to calf. Their annual migration of approximately 10,000 miles round trip is one of the longest mammalian migrations on earth.

On their return trip north in the Spring, a specific sub-population of about 11 or 12 stop off in Puget Sound and feed for about two months before completing their trip to the Arctic. They have chosen a specific location of Possession Sound and Saratoga Pass, between the southern end of Whidbey Island and Camano Island and Everett Washington. This small pod has regularly appeared here for the past 25 years arriving in late March and feeding until the end of May. For the most part, they are the same whales each year. The group’s appearance is typically heralded by arrival of #53, affectionately called “Patch.” We were fortunate enough to get a good close look at Patch on our trip. 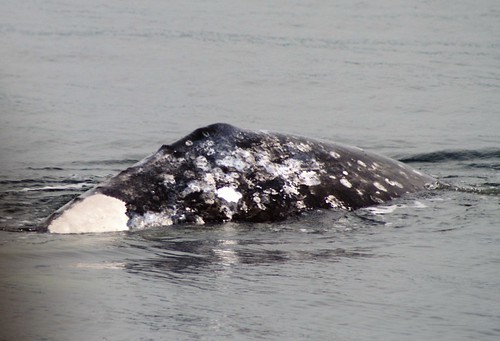 Gray whale #53, AKA, “Patch” for his white patch just anterior to his dorsal hump.

Their feeding ritual is interesting to observe. When the grays do their tail flip, as seen at the top, this begins their dive that propels them to the bottom of the bay where they poke a large hole into the mud bottom taking in the contents of  ghost shrimp and worms. These critters are then screened through their baleen and the mud and water strained out. 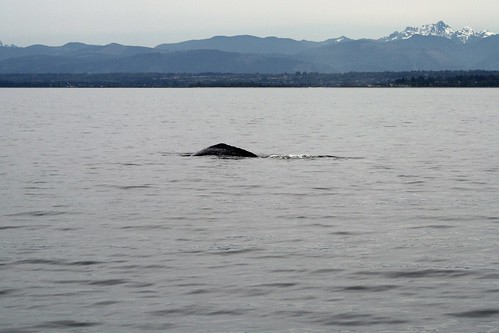 Initial posturing to start the dive 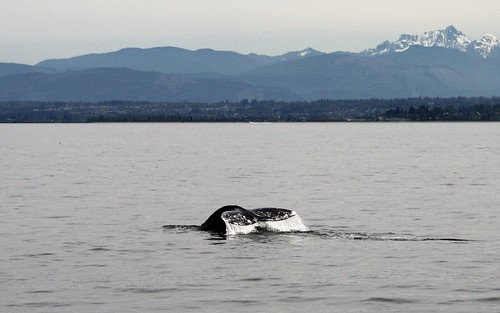 Diving with the tail coming up 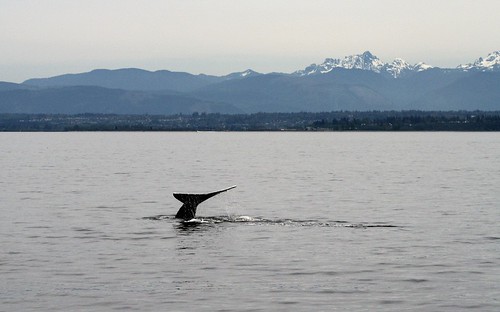 With a tail flip, it was straight down to the mud and shrimp.

We were able see and follow six different whales. It is interesting that they are reportedly quite curious about boats and do not appear to be put off by them. Those that we saw seemed mostly oblivious to us.  The whale watching tour boats abide by a slate of recommendations from the IWC for encounters with Cetaceans. Perhaps the overriding guideline from the IWC is to :

ALLOW THE CETACEANS TO CONTROL THE NATURE AND DURATION OF ‘INTERACTIONS.’

And this is what our boat did. When we spotted a whale the captain would head that direction and as we approached he would shut the boat down and we just drifted as we watched and took photos.

While observing the whales spouting, our on-board naturalist announced that we should get ready to smell the whale breath. At first we all just stood there looking around and sniffing. Then, after another blow, a putrid smell, like bad breath wafted over the boat – yuck… whale breath. 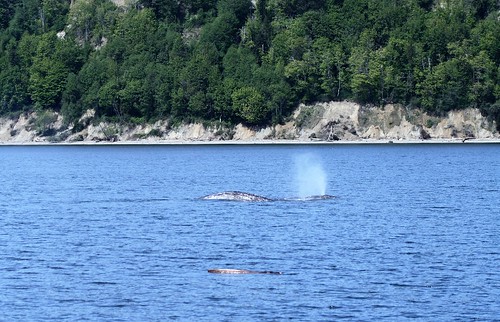 Two grays cruising together and one spouting off Camano Island

A few days before our tour these same Grays had been cruising and feeding as they did for us. However, their casual smorgasbord of shrimp and worms was temporarily interrupted by a naively over-confident adolescent orca. The only predators of the gray whale are humans and the orca. Although rare, orcas do attack whales, typically very young grays and humpbacks. Further, they typically hunt as a pack. In this case, this rambunctious adolescent orca single-handedly tried to take on two full sized Grays. The orca was one of a transient pod of Biggs orcas that was just cruising through the area and happened upon the grays.(The Biggs orcas feed on marine mammals whereas the resident, locals eat primarily salmon.) In this case the orca was seriously out matched by about 80 tons of the two grays. After a few rolls and tumbles, the orca called for help and his mother came to the rescue and escorted him safely away. None appeared injured according to observers. 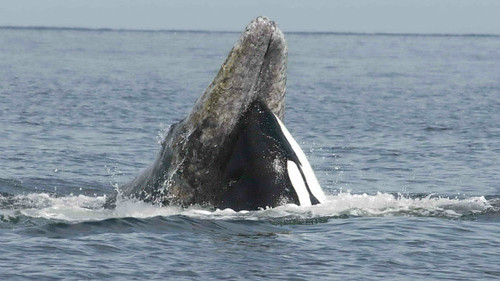 Orca tussles with a gray in Saratoga Pass

I have one more photo of a gray, or at least its spouting. This one was taken from my front porch a few years ago when one of the returning grays strayed into Bellingham Bay for a few days. This sighting was a relatively rare event as it is the only one seen in the Bay in my 47 years here. 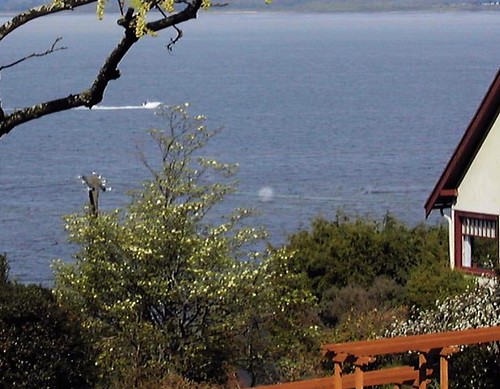 Often, those whales that stray too far off the usual track are ill and eventually die. This year one of the grays strayed into the Ballard locks, the locks that separate Elliot Bay (Seattle) and Lake Washington. A few days later, this same whale was found dead near Vashon Island, about 10 miles from Seattle. 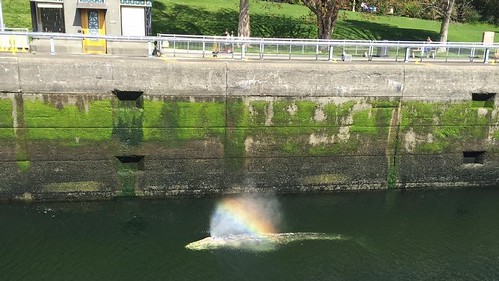 I hope everyone enjoyed Cinco de Mayo, had a Margarita or a glass of Sangria, and enjoyed the whales’ tales.