I have been monitoring the local sea star (Pisaster ochraceus) population following the devastating die-off from Wasting Syndrome over that past three years. As previously discussed, some pathogen and/or processes that are as yet not fully understood, have quite literally melted into goo upwards of 90% of west coast sea stars ranging from Baja California to Alaska.

I took a walk at a seasonally low tide (- 2.3’) to my usual sea star observing areas just a short way down the hill from my house. I found only two adult sea stars in the area in which just two weeks prior, I’d found 15. Although I didn’t see these small numbers as catastrophic or even necessarily bad, it was a bit concerning. 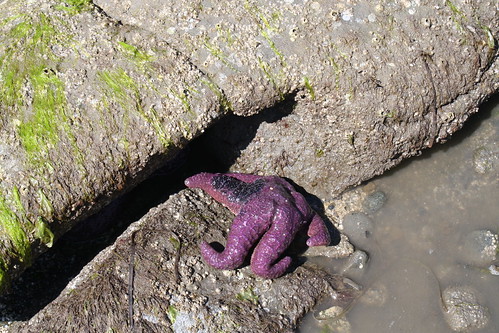 A few days later with my son, I took a short cruise around Bellingham Bay to check out the state of sea star recovery in some outer-shore locations. We surveyed the southern portion of Lummi Island shoreline and then looked along the mainland shore from Clark’s point north to Fairhaven and on to Bellingham.

Bellingham Bay occupies part of the eastern edge of the Salish Sea, extending about 9 by 5 miles. (see map) 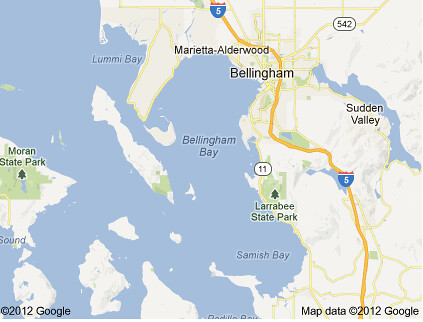 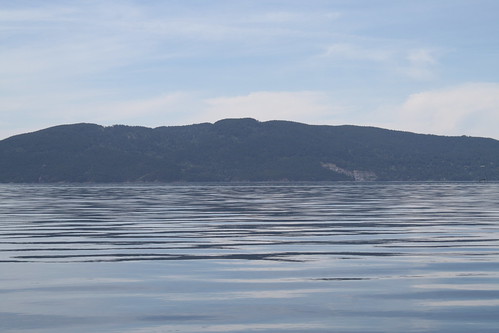 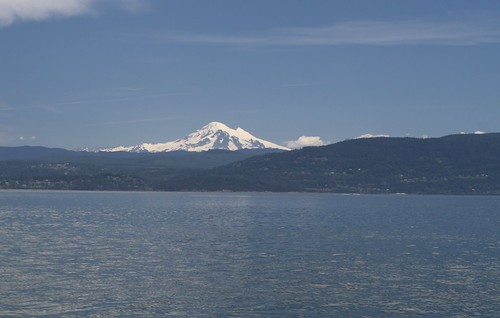 My conclusion after only a 3 hour cruise which I will illustrate, is that “yes,” sea stars certainly do seem to be returning and in some places to what appears to be to pre-wasting syndrome numbers. This observation is also consistent with Oregon State University scientists monitoring on the Oregon Coast.

A cursory count of stars just from just the photos I took showed about 250, most in clumps of 10 to 20. I saw at least an equal number that I did not photograph.

We first cruised across the bay to the rugged and rocky shores of Lummi Island which bounds the south west side of Bellingham Bay. Enroute we passed Eliza Island, just off the south east end of Lummi, to see the colony of Harbor Seals including fat males, doting mothers, and pups. 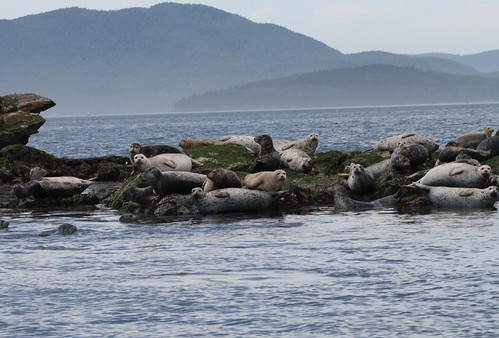 From Eliza Island we cruised north along the Lummi shore where we saw hundreds of sea stars hanging out at the water line and in any chink or hole they could cling to on the rocky shore.  Along here the cliffs drop off sharply and keep going, falling to over 100 feet just a bit off shore.  We were there at a minus 2 foot tide so upwards of 6 to 8 feet of the cliffs were exposed that are usually submerged. If stars are around, this is where they hang out, literally and figuratively as we’ll see.

There were stars of all sizes but clearly the adults were most numerous in my observations although I was likely unable to see the babies.  However, small and juveniles were apparent.

A gull takes a small star to lunch 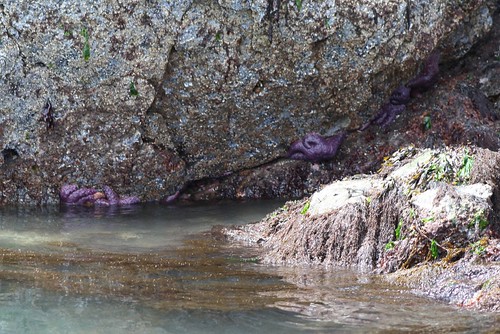 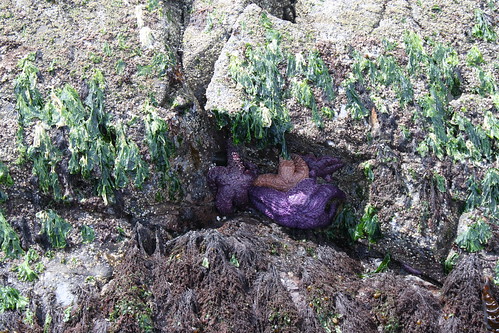 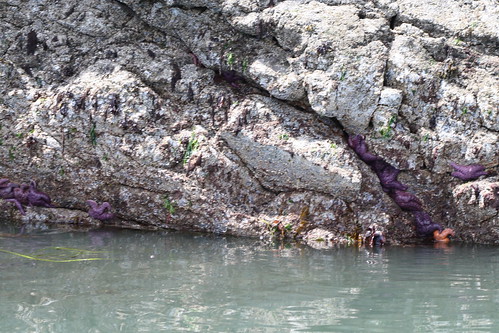 Amidst the numbers of healthy and viable stars, there was evidence of others showing wasting disease symptoms.

In a National Geographic piece on the resurgence of the stars, they describe symptoms of the wasting disease thus:

The wasting disease can kill an adult animal in as little as three days. Early symptoms appear as pockmarked lesions on the sea star’s body, followed by twisted, contorted arms and the inability to cling to rocks and other surfaces.

The photos below highlight what looks like in-process wasting disease. You will see some that have but four legs and/or “twisted, contorted arms” and others having difficulty clinging to the rocks. 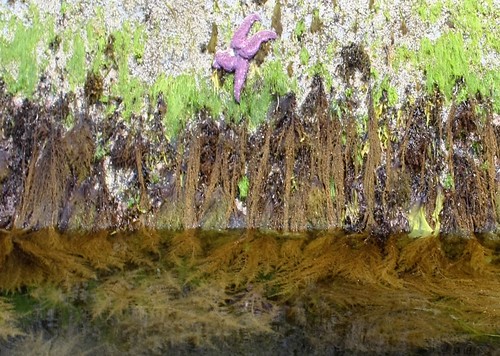 Only four arms and appearing unstable 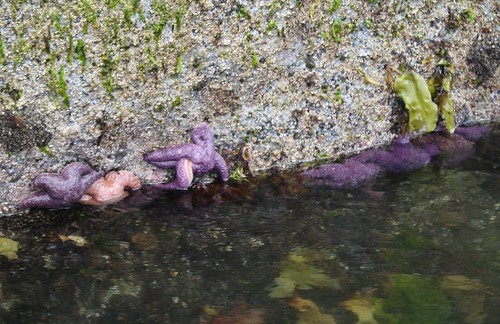 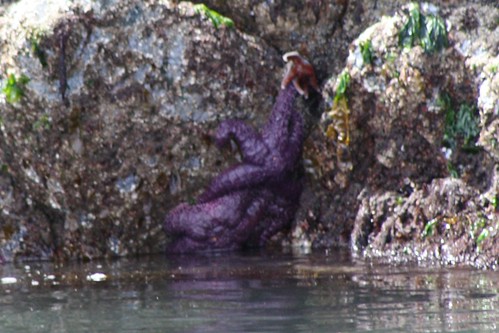 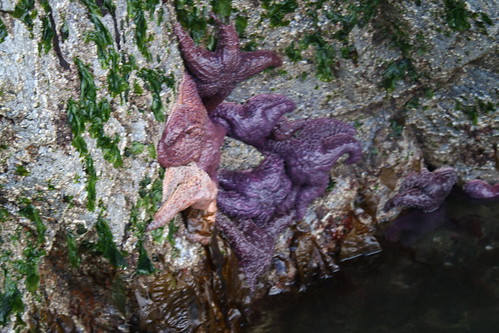 So there is the good news — bad news story of sea stars in Bellingham Bay at the edge of the Salish Sea. We observed no apparent differences in the distribution of healthy or diseased stars between the Lummi Island shore and the mainland shore which are separated by about 8 miles of water.
I really don’t know if the signs of the disease we saw marks the beginning of a new epidemic or the tail end of the ongoing one with just a few stragglers still dying. The sheer number of seemingly healthy stars is encouraging since I would estimate from these observation that only one to two percent showed signs of diseased. The larger stars which predominated here must be old enough to have lived through the past three years of the epidemic and hopefully, many are immune to the injurious effects of wasting disease.
Of course this sample was in no way systematic and I have no previous sample with which to compare it. However, I can state at a minimum that this population of stars is not currently devastated as has been well documented elsewhere. We can only hope for the best at this point as there is no known treatment or fix for wasting disease.

I’ll be keeping an eye on them over the summer.