On Monday, President Obama spoke to Steve Inskeep at NPR about the November election and whether he thinks Trump has won over a significant number of Americans:

From NPR: Obama: Trump Hasn’t Captured ‘Zeitgeist Of The Country’

“I think it’s pretty hard to argue that somebody who almost three-quarters of the country thinks is unqualified to be president and has a negative opinion about is tapping into the zeitgeist of the country or is speaking for a broad base of the country. But we’ll find out,” Obama said in a wide-ranging interview with NPR’s Steve Inskeep.

In a Washington Post/ABC News poll this week, 2 in 3 Americans said Trump was unqualified to lead the country.

That same poll showed President Obama with a 56% approval rating. 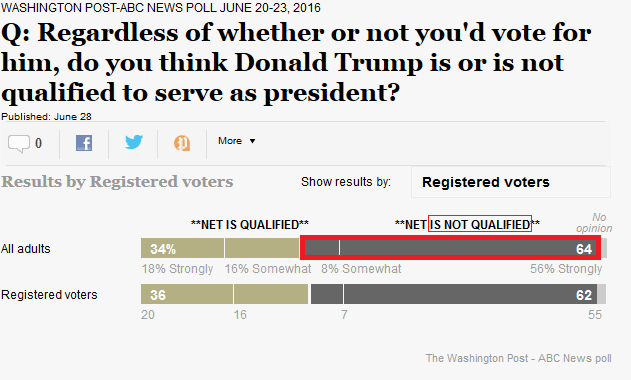 But opinion polls are not votes and the president has this warning:

Even with the unlikely wave of support Trump has ridden over the past year, tapping into populist unrest and anger with Washington, Obama said Trump wasn’t on pace to change the trajectory of America, though that “will be tested over the next four months.”