The initial reaction from many on the left was disappointment (we each had our favorites!), then grudging acceptance (okay, fine, it’s her choice, it doesn’t change our committment) … then this happened: on Saturday afternoon, Hillary introduced us to Tim Kaine – and he won us over:

Thank you so much for the warm welcome to the team, Jan!

I could not be more honored to fight alongside you — I know that together, we’re going to win in November.

I wanted to take a moment to tell you a little bit more about myself — and bear with me, Jan, since I know you might not have even heard of me before yesterday!

Growing up in Kansas, vice president was never a job I aspired to.

My dad ran an iron-working shop and my entire family pitched in to help.

Jan, I’ve been an optimist ever since. And since my time at a Jesuit boys school, I’ve been a man of faith.

After racing through college and starting at Harvard Law, I took a year off to volunteer with missionaries in Honduras. I got a firsthand look at a system in which the few folks at the top had all the power and everyone else got left behind.

That experience convinced me: We’ve got to expand opportunity and equality for everyone, no matter where they come from, how much money they have, what they look like, or who they love.

I’m lucky to have married a woman who felt the same: Anne is the daughter of Virginia Governor Linwood Holton, who integrated Virginia’s public schools and modeled how important it was by sending his kids in to lead the way.

Anne and I settled in Richmond, started a family, joined a church, and made our home together. I took on work as a civil rights lawyer, representing people who were denied housing because of their race or disability.

I found myself at a lot of City Council meetings to raise the issues I was dealing with on behalf of my clients. But the infighting was horrible! So in 1994, I decided to run for office. I knocked on every door in my district, and I won by 94 votes. (I know the value of the kind of organizing this team is doing!)

If I’m good at anything in public life, it’s because I started on the local level, listening to people, learning about their lives, and trying to find consensus.

In the years that followed, I became mayor of Richmond, lieutenant governor of Virginia, and in 2006, I served as governor.

I had to make tough calls during the recession. But I’m proud of what we accomplished in Virginia: the best managed state, the best state for business, and my personal favorite accolade, the best state to raise a child.

I’ve kept it up as Virginia’s senator. And I won’t stop when Hillary and I are in the White House. We’ll do what we know best: Deliver results for people.

That’s what drives us both. Hillary and I have different faiths but we share a common creed: Do all the good you can in all the ways you can.

We don’t back away from tough fights. We’re energized by them. Hillary and I have a strong progressive agenda and we’re not going to get distracted from it.

We’ll make our economy work for everyone. We’ll make college debt-free. We’ll take on the NRA, we’ll work toward comprehensive immigration reform — we’ll fight for paid family leave, and equality for women, and making sure every kid has a chance to live up to their potential.

These are tough times — but we’re tough people. We can do it.

Let’s go, Jan. I’m excited to work with you to make history:

Thanks again for the warm welcome.

Based on Tim Kaine’s biography, his purple state electoral bona fides, his simple decency, his enthusiasm(!) – I am convinced that this is a person who will be an asset to Candidate Hillary Clinton and President Hillary Clinton. 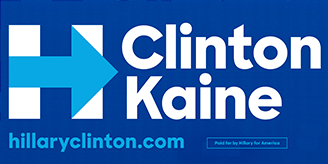 What they are saying …

Tim is a lifelong fighter for progressive causes and one of the most qualified vice presidential candidates in our nation’s history.

But his credentials alone aren’t why I asked him to run alongside me.

Like me, Tim grew up in the Midwest. During law school, he too took an unconventional path — he took time off and went to Honduras to work with missionaries, practicing both his faith and his Spanish.

When he returned to the states and graduated from Harvard Law, he could have done anything. But instead of going to some big corporate firm, he chose to fight housing discrimination as a civil rights lawyer in Richmond. He and his wife joined a church, built a home centered around their faith, and raised three beautiful children. Then, after 17 years of practicing law, Tim ran for city council — and won.

Tim says his experience on city council taught him everything he knows about politics. To the people in Richmond, an underfunded school wasn’t a Democratic or Republican problem. It was simply a problem that needed fixing, and his constituents were counting on him to solve it. So Tim would do it. He’d roll up his sleeves and get the job done, no matter what.

He’s a man of relentless optimism who believes no problem is unsolvable if you’re willing to put in the work. That commitment to delivering results has stayed with him throughout his decades-long career as a public servant. So I could give you a laundry list of things he went on to accomplish — as mayor of Richmond, governor of Virginia, and in the United States Senate.

But this is what’s important: Tim has never taken a job for the glory or the title. He’s the same person whether the cameras are on or off. He’s sincerely motivated by the belief that you can make a difference in people’s lives through public service.

That quality comes through in every interaction. To know Tim is to love him. When I was talking to people about this decision, I couldn’t find anyone — Democrat or Republican — who had a bad thing to say about him. From his staff over the last 20 years to his colleagues in the Senate, Tim’s beloved.

He is a genuinely nice person, but Tim is no one’s punching bag. He will fight tooth and nail for American families, and he’ll be a dogged fighter in our campaign against Donald Trump and Mike Pence.

I want you to know that I didn’t make this decision lightly.

I’ve had the privilege of seeing two presidents and two vice presidents up close. I want a vice president who can be my partner in bringing this country together. I want someone who will be able to give me their best advice, look me in the eye, and tell me they disagree with me when they do.

But what matters most is a simple test that’s not so simple to meet: whether the person could step in at a moment’s notice and serve as president.

I have no doubt that Tim can do the job. I want him by my side on the trail and in the White House.

I wanted to take a moment to tell you why I’m so proud that Hillary has chosen Senator Tim Kaine to join her on the Democratic ticket this fall.

Nothing can really prepare you for this job. You come to learn that it’s about having a firm grasp of the issues, sound judgment, and the tenacity never to stop fighting to make people’s lives better.

The thing about Hillary is, she already understands all that. She does her homework, she masters the issues, and she never gives up. She gets the job done. And more than almost anyone I’ve worked with in Washington, Hillary’s the kind of person who sees a problem and says, “How can I fix this? What can I do to help?”

But this job is also about surrounding yourself with the best possible people. And there’s no more important decision you’ll make as a presidential candidate than choosing a vice president. There are basically two paths you can take. You can pick someone for purely political reasons — or you can pick someone who will be your partner in government. Someone who shares your values. Someone who will make you a better president.

That’s why I picked Joe Biden — and it’s a testament to Hillary’s character and integrity that she chose a man like Tim Kaine.

Like Hillary, Tim is an optimist. But like Hillary, he is also a progressive fighter. He’s the son of a teacher and an iron worker who’s always got working families on his mind. For nearly two decades, he specialized in representing people who had been denied fair access to housing just because of what they looked like, or because they had a disability. And when a gunman killed 32 people on the campus of Virginia Tech, Tim knew he had a responsibility as governor to offer more than thoughts and prayers to the community he mourned with — and as a gun owner, he stood up to the gun lobby on their behalf.

There aren’t a lot of elected officials in Washington whom people like even more when the cameras are off than when the cameras are on. But Tim is that kind of guy. He’s a man who’s risen to the highest levels of government but still lives in the same neighborhood he did as a city councilmember in Richmond. You just can’t find anyone with a bad thing to say about him, from the staff who’ve worked for him to the Republicans who’ve served alongside him.

Simply put: Tim is a good man. He’s a true progressive. And he will make a great vice president.

I could not be prouder to support our Democratic ticket — please join me in welcoming Tim Kaine to this team.

Thanks for everything you’ve done and will do to elect Hillary and Tim.

Tim is going to be a great vice president

Jan, back in January of 2013, I asked newly-elected senator Tim Kaine of Virginia to raise his right hand and swear to uphold and defend our Constitution as a new member of the United States Senate.

Come January, I hope we can all watch Tim be sworn in as our nation’s vice president.

As you might have guessed, I have a few thoughts about what it takes to do this job. So believe me when I tell you that Tim is going to be a great vice president and an ideal partner in government for Hillary. I’ve known Tim for years, and I know his character — he’s a genuine public servant who prioritizes results over politics. I would be pretty damn proud to see him move into my office in January. Can you chip in $8 right now to help them win?

This ticket is complete, and they’re counting on us, Jan. When you volunteer some of your time or chip in $8, you’re serving your country and investing in our future. I respect and admire that, but more than anything else, I’m thankful for it. With the prospect of a Trump presidency on the horizon, it just means so much to know that you’re standing with Hillary.

So today, chip in $8 and show Hillary you’re with her. Show Tim you’re glad to have him on the ticket, and show the world how proud you are to be part of a campaign that stays true to our country’s founding principle that all people are created equal:

(I think he wants your money!!)