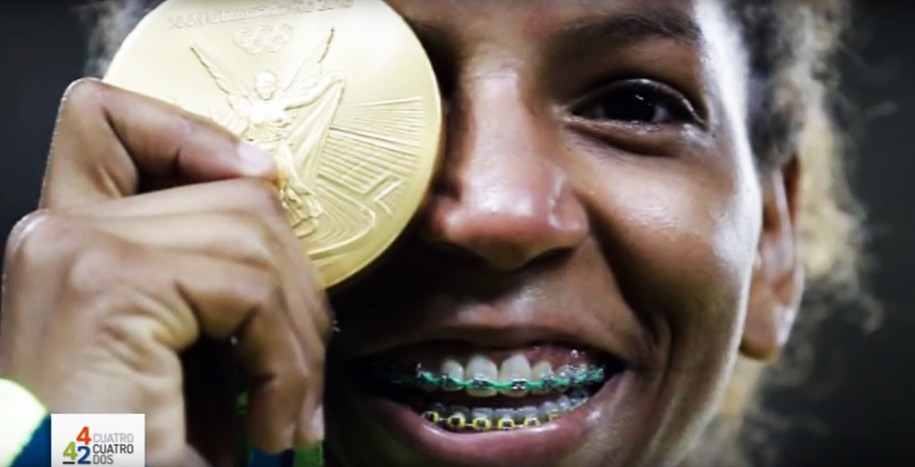 I’ve been thinking over the Brazil Olympics and feeling “saudade” (can be pronounced sow—dahd-Jee) which is often dubbed a Portuguese word that is untranslatable.

…a Portuguese and Galician term that is a common fixture in the literature and music of Brazil, Portugal, Cape Verde and beyond. The concept has many definitions, including a melancholy nostalgia for something that perhaps has not even happened. It often carries an assurance that this thing you feel nostalgic for will never happen again. My favorite definition of saudade is by Portuguese writer Manuel de Melo: “a pleasure you suffer, an ailment you enjoy.”

I will more than likely never return to Brazil. My dearest friend there has died, and I just don’t want to attempt to revisit what I shared there with her. However, what she did teach me about Brazil, I will never forget. I waited impatiently to watch the Olympics from Rio, hoping to recapture just a bit of the Brazil Maria introduced me to.

Brazil is the country with the largest African-descended population in the world. The country with the largest number of black people is Nigeria. I had expectations of seeing that reflected in the Olympics coverage, and it didn’t happen. Yes, there were segments featuring some of the black Brazilian athletes — most notably Rafaela Silva, who claimed Brazil’s first gold in the games, winning in judo.

Some background on her entrance into the sport is covered in this video:

Silva grew up in Cidade de Deus (City of God), Rio de Janeiro, primarily playing football on the streets of her neighbourhood. She was first introduced to judo at the age of 7

What is not discussed in the video is the racism she had to battle, from Brazilians, after losing in 2012. She spoke about it after winning the gold in 2016.

In the final, Silva beat Sumiya Dorjsuren of Mongolia after two days of disappointment on the mat for Brazil.

But the victory provided some vindication for the racial abuse Silva, who is black, endured from Brazilians after missing out on a medal at the 2012 London Games. Four years ago, she received text messages telling her “the place for a monkey is in a cage.”

“The monkey that they said had to be locked up in a cage in London is today an Olympic champion at home,” Silva said. “Today, I’m not an embarrassment for my family.”

“I can serve as an example for the children of the community, because just being black means that people look at you in a different way. You walk down the street and people hold on to their bags”

What NBC didn’t discuss either (that I saw) was her gender identity. Silva is lesbian and lives with her partner who she met via judo. She came out publicly to the press for the first time in an interview with Globo Sports.

Both the opening and closing ceremonies offered a glimpse of black Brazil — though my take away is that much of it got lost in the sauce.

While many will be tuning into the Olympics opening ceremony in Rio De Janeiro to catch a glimpse of globally renowned figures such as Gisele Bunchen or Gilberto Gil, the star of the show may well turn out to be a diminutive 12-year-old from São Paulo. Despite her youth, MC Soffia is already six years into her career as a rapper, and has gained fame for her lyrics which aim to empower young African-Brazilian women. She tackles the country’s long history of slavery and racial division, and challenges the way black people are represented in her rhymes.

In an interview last year, she explained how she became aware of Brazil’s casual racism when she was teased in kindergarten: another child told her her skin was black because she fell into a tin of paint. “I used to be teased by everybody,” she said. “So one day I told my mom I wanted to be white.” Outraged, her mother began taking her to hip-hop concerts to learn more about her roots, and foster a strong sense of confidence in her heritage – a pride which is now reflected in Soffia’s lyrics. Her song Africa pays homage to famous black Brazilian women such as the historical figure Chica de Silva – who was born a slave but whose children become nobles – and the author Carolina Maria De Jesus.

Another song, Menina Pretinha, or Little Black Girl, touches on her core messages with lyrics such as, “I will enjoy myself while I am small / Barbie is cool, but I prefer the African Makena,” in reference to the black dolls. “I’m black and I’m proud of my color … My hair is dope, it doesn’t need a flat iron,” she adds. In an interview this week, Soffia said she hoped her Olympic performance would also shine light on a campaign to enforce a 2003 law that requires schools to include African culture in their curriculum. “When people do talk about Africans in Brazil, it’s about them being slaves, not about how much we have contributed to making Brazil what it is today,” she told the Daily Mail. “That just encourages white kids to treat us bad.

My go-to site for coverage of black Brazil issues, Black Women of Brazil, had a story I didn’t see reported in our press, involving the Brazilian women’s soccer team.

“I hate blacks but Brazil’s goalie has a chance!”- After racist post, federal official justifies himself: “I have a black wife and several black friends”

“Eu odeio preto, mas essa goleira do Brasil tinha chance”, meaning “I hate blacks, but this goalkeeper of Brazil has a chance.”With this phrase, Marcos Clay, administrator from Rio Branco (capital city of the state of Acre), referred to the goalkeeper of the Brazilian women’s futebol team at the Olympics, Bárbara Micheline do Monte Barbosa, in a post on Facebook last Friday (12).

Clay, a member of the Federal Council of Administration (CFA), deleted the message, but the G1 website obtained a copy. Speaking on the same site on Saturday (13), the acriano (native of Acre state) said it was “no more than a joke.” He made other posts on Facebook clarifying the matter. Clay “argued” that “racism is in people’s heads” and proof that he’s not racist is the fact that he is “married, and very happily married” with a black woman.

The Editor of BW of Brazil stated

Note from BW of Brazil: Here we go again! You just gotta love the widespread denial on the topic of racism in Brazil. And the justifications for why one cannot possibly be racist are ALWAYS the same! “I can’t be racist because….because my grandmother’s black…because I have black friends…because my wife is black…because I’ve been with a black man…because our black maid is like one of the family“. As these tired excuses are so common and we’ve already dealt with this issue in numerous posts, I won’t even waste time debating this. I mean, his comment says it all: a type of ‘I don’t like blacks, but for that one (successful black, athlete, singer, etc.), I’ll make an exception.’

But I will say, one of the contributing reasons why racist attitudes continue to exist is because when people make such “jokes”, no one steps forward and repudiates the comment thus, in a way, they condone it. I DO wonder how this guy’s ‘black friends’ felt about his post. As this blog has stated in previous posts, the difference in Brazil today is not that racism is new, but rather the reactions and repudiations of so many Afro-Brazilians who stand firm in the face of such sentiments.

The Editor also noted that the Olympics served to deflect attention from Brazil’s social conditions:

Brazil deserves the tin can medal

As I sat and watched the closing ceremony, looking at a spectacle featuring pyrotechnics and music which we couldn’t hear as NBC host commentators talked over the entire show, I kept straining to see black Brazilians. Finally there was a segment featuring the lace making of enslaved women.

The announcer chattered about “when the slaves came over” and I was like “Wtf, does he think folks booked tickets on slave ships” and then he went on to praise the slave masters who allowed the women to make lace to earn money.

No talk of Brazilian candomble, black female priestesses garbed in white…just a side bar on the lovely craft of lace-making.

Just as the opening ceremony included a somber (if glossed over by commentators) acknowledgement of Brazil’s history of slavery and Portuguese colonization, the closing ceremony paid tribute to the contributions of black female slaves with a somewhat more reverent and uplifting tone than the dirge of the opening ceremony.

The segment featured black women in dressed in white, dancing and singing joyfully, while huge projections of intricate lacework were thrown across the Maracanã Stadium floor. They represented the iconic Brazilian tradition of bilro lace weaving, which came to the country through Portugal, but the segment itself lent vital visibility to Afro-Brazilian women who often fall victim to the country’s deeply ingrained racism. Unfortunately (and unsurprisingly), commentators chose to focus on the “pretty crafts” part.

Not sure if I agree with her take on the joyful part, since the lot of enslaved women was not filled with joy — except when plotting escape, or when doing ritual — but at least she covered it.

As a sports fan, I admit I enjoy watching international competition, and the Olympics provides it in spades. As an anthropologist steeped in the study of race and racism, I can’t say that I enjoy the false face or cover this mega event provided to whitewash the reality of life in Brazil for black and Afro-descended Brazilians.

What was your take?