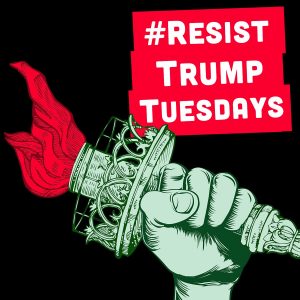 Good morning, Meese!  I’m starting to feel more comfortable with this platform, so with a little luck, we’ll have a post that is less bare-boned and more detailed than my first attempt.

I’m full-on, foaming at the mouth “irked” as I write this.  Start with this: https://www.theatlantic.com/politics/archive/2017/02/how-to-beat-trump/515736/  The Very Serious David Frum decided that us liberals need instructions on how to protest properly, so that we “scare” Trump. The premise is weak in and of itself if 45s Twitter feed is any indication; I think we’ve scared him already.  But this was the paragraph which raised my ire:

Don’t get sucked into the futile squabbling cul-de-sac of intersectionality and grievance politics. Look at this roster of speakers from the January 21 march. What is Angela Davis doing there? Where are the military women, the women police officers, the officeholders? If Planned Parenthood is on the stage, pro-life women should stand there, too. If you want somebody to speak for immigrants, invite somebody who’s in the country lawfully.

I read this and heard the white male condescension loud and clear. I heard the dismissal of women, particularly women of color. (You know, the women who are the base of our party.) I heard the assumption that patriotism is the sole purview of the Right. I heard the call for the Left to play by rules made by male Republicans who know better by virtue of being…male Republicans. He apparently wrote this without any sense of irony; without any sense that what he is calling for is exactly what we are protesting against. Mr. Frum, I have a suggestion for you: less writing, more listening. That’s the polite version; I’m sure you all know what I’m actually thinking.

Oh, and by the way, here’s what Mr. Frum thought we shouldn’t hear:

And now for some bonus tweets:

8 measures to restrict protesters' rights have been introduced in state legislatures. If any of them are signed into law, we'll sue. https://t.co/4epeHpjQhg

And saving the best for last:

Hillary Clinton in new vid for @MAKERSwomen: "Despite all the challenges we face, I remain convinced that YES, the future is female." pic.twitter.com/FCjI5ey5ia