In honor of Lysis’s orginal Hillary News & Views, welcome to 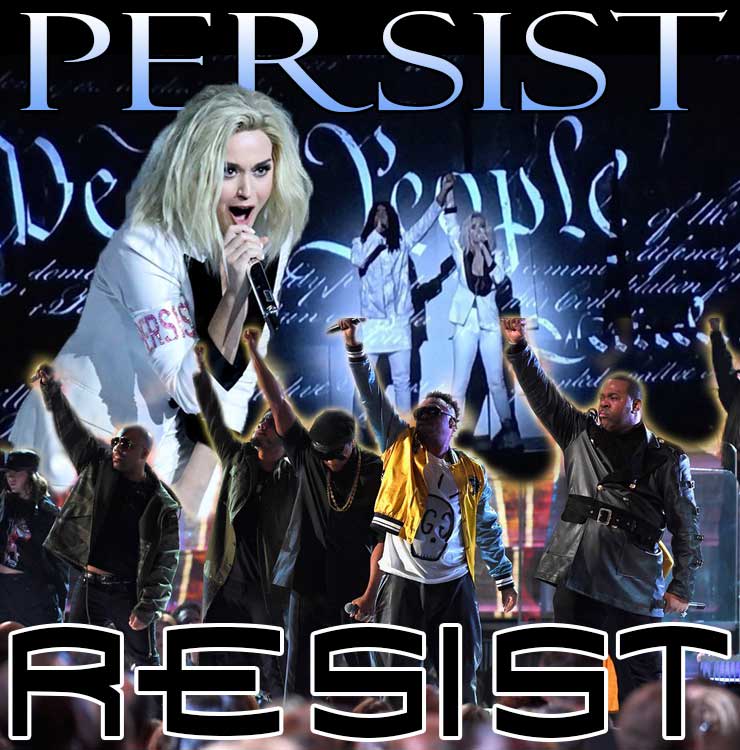 This Week In Music:

So, the Grammys… I have the patience of a toddler when it comes to awards shows so I’m not going to try and do anything comprehensive here, but I picked out some tweets that hit things I was interested in. Then there was that lady with the Make America Great Again dress. So that happened. Some other things did also…

Black artists at last night's #GRAMMYs gave the world something to talk about: https://t.co/30rwbV1des pic.twitter.com/3hcWTc9CXC

.@chancetherapper became the first artist to win a Grammy for a streaming-only album. He collected 3 #GRAMMYs in all Sunday. #HistoryNOW pic.twitter.com/OoTJVwowqj

.@Adele on Beyonce backstage: "I feel like it was her time to win. My view is kind of, what the f— does she have to do to win?" #GRAMMYs pic.twitter.com/MH22KMF05I

There was a lot more, some great, some eh. Among the great, moving tribute to George Michael by Adele, and kick-ass tribute to Prince by Bruno Mars. You either saw them or you can find them. But post below what you thought was significant, that I left out.

And now, a brief jaunt into the land of rainbows and kittens, ’cause the real world is a little stressful right now. Except it isn’t, as you will see. Rather than a lovely escape, this fantasy Twitter account @IfHillaryHad started a little wistful, and has become some awesome satire.
(language warning: Alt-HRC does not mince words cusses like a sailor)

In An Alternate Paradise:

⚡️ The happenings of #AltPOTUS45 will be updated by Bill daily. #BillErrandshttps://t.co/Ge2iaEA4lX

DAY 22: Still not dreaming of a pointless #FuckingWall. Told Flynn he was a treasonous SOB. Sent Bill to the florist for petunias.

DAY 22: Haven't taken any golfing breaks. Told Ivanka that her clothing line was fucking trash. Sent Bill to Teaism for a bento box.

DAY 23: Still not obsessed with cable news (Chuck Todd can fuck off). Told Ryan he's a spineless dipshit. Sent Bill to the garden for basil.

DAY 24: Not carelessly blabbing state secrets at cheesy resorts. Told the GOP that they're all fuck-ups. Sent Bill to Lush for bath bombs.

DAY 24: No one's resigned yet (except Bill to the couch for naps). Told the GOP they're a fucking disaster. Watched Juno & drank 🍷 w/ Huma.

DAY 24: Still no Russian spies in my ranks. Sent Yates a bottle of expensive wine (she's smart AF). Had Bill whip up a strawberry shortcake.

DAY 25: My WH isn't falling like a house of cards. Told the GOP that they're a fucking trainwreck. Sent Bill to Au Bon Pain for a croissant.

DAY 25: No FBI investigations into my team (those emails tho). Told Chaffetz he's a hypocritical POS. Sent Bill to Nordstrom's for earrings.

DAY 25: Again, no treasonous bastards in my ranks. Told the GOP to go fuck themselves. Sent Bill to Shake Shack for a frozen custard.

You would've been sooooo bored during my presidency and you would've loved it.

…and then Beyonce comes out for the duet with Adele and the resulting hole in space-time drops us into @IfHillaryHad's universe. #GRAMMYs