Good morning, everyone. This is a pretty exciting time for us. Four weeks since the Inauguration of a new President. Eight years ago, on this day, President Obama signed the Recovery Act, which got us down the path already for moving toward health care for all by having the electronic medical records contained in it already. He had signed SCHIP to cover many children in our country. Progress was already made on this four-week anniversary. Oh, and Lilly Ledbetter – did I mention that?

“But I didn’t want the morning to pass without acknowledging what this date meant eight years ago. It also began our path toward health care for all Americans as a right, not a privilege for the few. Inspired by so many and seeing the urgency – and captured best by Dr. Martin Luther King when he said, ‘Of all the forms of injustice, of all forms of inequality, injustice in health care is the most inhumane.’ […]

“[February 18th] will be our centerpiece day for events – town halls, real hospital visits, roundtables and many things in between. The American people are mobilizing against the Republican assault on affordable health care, but Democrats will keep fighting to ensure that health care is right of every American, while Republicans want to Make America Sick Again.

Our values are what unite us. That has always been true — and it always will be. #ProtectOurCare pic.twitter.com/pUI1Lr7acn

Also in the news, House Democrats spoke about the ICE raids and the unprecedented level of disdain shown to their concerns by both the Republican leadership in the House and the White House.

House Democrats spoke to reporters following a meeting with Immigration and Customs Enforcement (ICE) Acting Director Thomas Homman on immigration raids and deportations happening in several states. They expressed concern about how the Trump administration controlled their opportunities for meeting and about some of the recent apprehensions and deportations being conducted by the agency around the country against undocumented immigrants.

Nancy Pelosi on the raids, and before the “meeting”:

In the past week we have witnessed ICE raids across our nation targeting parents, students, and a DACA-protected DREAMer. We talked about some of this yesterday with our Members. We have seen press reports of federal immigration agents [who] went to the El Paso County Courthouse and arrested an undocumented woman who had just received a protective order after suffering domestic violence. The agents apparently detained the woman after receiving a tip, possibly from her alleged abuser.

What is this? You know, it’s supposed to be that they are only supposed to be – well, in one case ICE even lay in wait for undocumented immigrants outside a church hypothermia shelter. These are some places in the churches and all the rest that we’re really supposed to be more respectful of.

The only result of the Trump Administration’s cruel and arbitrary approach is to instill fear in our immigrant communities. We all share the responsibility of protecting the American people and doing so to protect and defend the Constitution of our country. ICE must focus on removing violent criminals, not on dividing law abiding families. 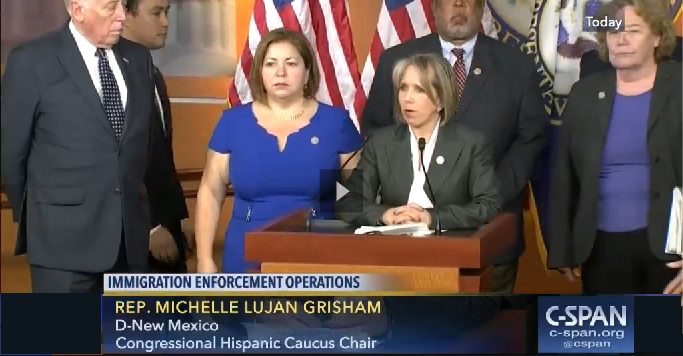 20 comments for “Fighting Back: “Protect Our Care” – Democrats Call For ACA National Day of Action”