Via the Washington Post, DREAMer Astrid Silva responds to the Republican’s president and his plans for an American dystopia …

“This [speech] serves as evidence and notice that the plans and vision of Trump and the Republicans go completely against our values as Democrats, as Americans, and as human beings.” 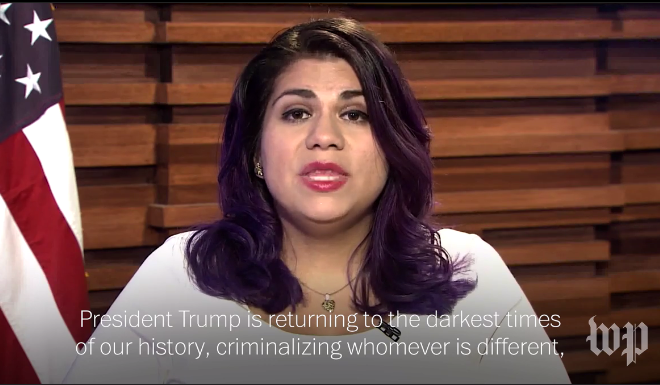 Astrid Silva, a 28-year-old immigration activist from Nevada, delivered the Democrats’ Spanish-language response, seeking to cast the president’s policies and comments about immigrants in the U.S. illegally as divisive and destructive to millions of otherwise law-abiding families.

She spoke of the case of Guadalupe Garcia de Rayos, an Arizona mother thought to be among the first immigrants deported as a result of Trump’s executive order that widely expanded the category of immigrants whom the government considers deportation priorities.

“Today Guadalupe is far from her children who are U.S. citizens and who are an example of the great impact that Trump’s actions have over the American people in general, not just on the undocumented community,” Silva said in the remarks that aired on several Spanish-language networks, including Univision and Telemundo.

“In this country, there is no space for discrimination, racial profiling or persecution,” Silva said. “But sadly, this is what the Trump administration has brought forth for Latinos and immigrants.”

“Good evening, my name is Astrid Silva and I’m a DREAMer and activist from the great state of Nevada. My family came to this country when I was 4 years old, looking for a better life. And like many of you, this is the only home I know.

It is an honor for me to be here today to give the Democratic response to President Trump’s first joint address to Congress.

“I’m here representing Democrats, Latinos, and the 11 million undocumented immigrants who are an integral part of this country and who embody the values and the promise of America. The same ones that President Trump is threatening with his mass deportation plan.

“The speech we heard moments ago from President Trump was divisive and aims to cause fear in communities across the country. It serves as evidence and reminder that President Trump and Republicans’ vision and plan for the United States, go completely against our values as Democrats, as Americans, and as human beings.

“The United States is not a country guided by hatred, fear, and division, as Trump makes it seem. Our country is guided by respect, hard work, sacrifice, opportunity, and hope.

“In this country there is no space for discrimination, racial profiling, or persecution. But sadly, this is what the Trump Administration has brought forth for Latinos and immigrants.

“During his first weeks as President, Trump signed executive orders that endanger our entire community. He took actions that focus specifically on hurting immigrants and refugees. He is spending resources on targeting working immigrant families for deportation, he wants to spend billions of dollars to build an unnecessary border wall, and he’s looking for ways to deny entry to our Muslim brothers and sisters.

“He made it very clear during his presidential campaign that he wanted his supporters to believe that all immigrants are criminals and refugees are terrorists.

“And recently, he directed immigration enforcement agents to arrest and deport any undocumented person they find, essentially legalizing racial profiling and setting in motion his mass deportation plan.

Among the people that ICE arrested, are mothers, fathers, DREAMers with DACA, a victim of domestic violence, and many more.

“As a matter of fact, tonight in the gallery listening to President Trump’s speech where Guadalupe Garcia de Rayos’ children, a working mother from Arizona who went to her appointment with ICE only to be arrested and deported without reason. Today Guadalupe is far from her children who are U.S. citizens and who are an example of the great impact that Trump’s actions have over the American people in general, not just on the undocumented community.

“These people should not be ICE’s target or priority. This is not who we are as a country.

“President Trump is taking us back to some of the darkest times in our history: criminalizing anyone who is different, pitting us against each other, and sending the wrong message to the rest of the world, helping to breed anger and hate from terrorist groups to our country.

“But we must remember that this is a kind country that is full of hope, where freedom of expression rules, and the people are powerful.

“Instead of mass deportations, President Trump should focus on creating jobs and growing our economy. He should recognize immigrants’ great contributions to our country, of which he has benefited as well.

“Instead of separating families, President Trump should pass comprehensive immigration reform that honors our country’s tradition of welcoming immigrants.

“Instead of closing the door on Muslims and insulting countries around the world, President Trump should work with our allies to combat and defeat ISIS and other terrorist, and seek peace.

“Instead of standing behind oil companies and special interests, undoing the progress we’ve made to combat climate change, President Trump should be a leader and protect the quality of our air and our water. Because we only have one planet, and if we destroy it, what are we going to leave for our children?

“Latinos suffer more from asthma than other groups. The state of our environment is key to our wellbeing.

“Instead of getting rid of the ACA, which gave health insurance to millions of Latinos, Trump and Republicans should make improvements to the program so it can cover more people and cost less.

“Republicans want to defund Planned Parenthood, even though community clinics provide preventive and primary medical care for hundreds of thousands of people.

“Across the country, people are attending town hall meetings with their Republican Senators and Members of Congress showing their discontent over the possibility that they’ll take away health insurance from millions of people, many of whom can’t pay for it on their own. Republicans must listen to these people and assure that the almost 30 million Americans don’t lose their coverage.

“Instead of hiring millionaires, billionaires, and Wall Street executives DeVos, for his cabinet, President Trump should keep his campaign promise of working for the wellbeing of the American people.

“Our schools need more funding, our teachers need better salaries, and our vulnerable children need protections. We don’t need a Secretary of Education, like Betsy DeVos, who has worked to damage our public education system and has benefitted economically from taking money away from our schools.

“We’re getting close to the confirmation process for Supreme Court Nominee Judge Neil Gorsuch. Now more than ever we need a counter for an out of control administration. President Trump attacked our Justice system, and Judge Gorsuch must probe that he’ll be an independent judge who won’t owe himself to this administration.

“We are living in uncertain times that are completely abnormal. In which the administration constantly questions the media and tries to actively destroy their credibility.

“This merits that those of us who understand what’s at risk for women, for the LGBTQ community, for our environment, for workers, immigrants, young people, and refugees, work together to protect our communities from deportation, violence, and discrimination. That’s the only way to safeguard the values that make our country great.

“Immigrants and refugees are the heart and soul, and the promise of this country. And we are not alone.

“Democrats have vowed to fight for us and for the middle class.

“They are our frontline against President Trump and Republicans’ harmful policies – in Congress, in the Senate, in the courts, and in the streets.

“Democrats want equality, respect, and opportunity for all because we know that our nation is stronger when we treat each other with respect and work together for the common good.

“I’ve had the luck of growing up surrounded by my family and realizing my aspirations. I was able to go to school and college, earning an associate in arts from the College of Southern Nevada and my bachelor’s from the Nevada State college. I’m a living example of the promise of America. And I know Democrats will keep fighting for the promise of a better life for everyone.

“President Trump and Republicans can use calmer rhetoric and appear to moderate, but we know that words are cheap and actions matter.

“I’m here today to tell you that Democrats have our back, and to ask you to keep fighting and don’t let down, because we’re in this together.

“May God bless you. Thank you and good night.”

(Spanish text at the link)

8 comments for “DREAMer Astrid Silva: “The plans and vision of Trump and the Republicans go completely against our values as Democrats, as Americans, and as human beings””