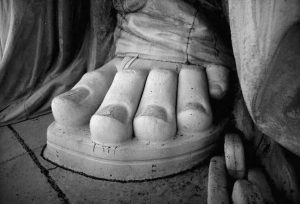 “The toes of Miss Liberty found a home on American soil.”

The comments of Stephen Miller and the restrictive immigration standards of the proposed RAISE Act have caused me to think a lot about immigration lately. I’m in the privileged position as a white woman to have been able to trace my family tree back many generations; in some cases, that translates to many centuries too. I am 100% a child of immigrants, and of the seven lines I’ve been able to trace back beyond my maternal and paternal great-grandparents, only two lines spoke English as their primary language. It troubles me deeply that people, especially those in my own family, see no problem with a condition that would require English-language ability before allowing immigration. The claim that learning English is now more accessible than it was in my great-grandparents’ day falls short for me, because it presumes access to a type of education that is still more available for the privileged, the white, and the western European. But then, I suppose that’s the point.

My great-grandparents are on this page of the 1900 census, and eight years after arriving in the United States, they could not speak English.  By the 1910 census, my great-grandfather is listed as speaking English; my great-grandmother is still listed as a German speaker.

Another set of great-grandparents are on this page of the 1910 census, 17 years after their arrival in the States. Great-grandfather speaks English; great-grandmother still does not.

This is from the 1871 English census, which includes my 2x great uncle. He is a convict-inmate of Dartmoor Convict Prison; by 1874, he has emigrated, is working, and living with and supporting his widowed mother (my 2x great-grandmother). Would he have been allowed in under the RAISE Act?

This is the naturalization record for my grandfather; a naturalization made possible by enlisting in the U.S. Army during WWI. He served as a translator (since German was still spoken in his home, he had not lost his fluency) and was wounded at the Battle of St. Mihiel in 1918. He spent six months recovering in hospitals in France before returning stateside and being honorably discharged. When we insist on English, do we risk losing future translators?  Do we really want to be a country that turns its backs on all but the affluent, the privileged, and the “successful”?

I am far from the only one with serious reservations about the RAISE Act. Twitter provides a sampling:

REMINDER: The child of an unskilled Syrian immigrant made it possible for you and 700 million people to read this tweet #RaiseAct pic.twitter.com/u2fjeh974U

They were uninvited, didn’t speak the language, had no jobs, and started receiving welfare as soon as they arrived.#RAISEAct #IMMIGRANTS pic.twitter.com/VZ7ctP63wZ

Poor immigrants are the least likely group to use welfare, despite Trump’s claims: https://t.co/bzhPUhT4KE

This is our history. This is how our country was born. Compassion. Asylum. Freedom from persecution. The #RaiseAct is #antiimmigrant . pic.twitter.com/uFPKMPt2ZI

And nobody, but nobody, is going to deprive me of my Basset hounds!

5 comments for “It Takes A Village – VNV Tuesday: Family, Immigration, and History 8/8/17”