The Village News & Views September 6, 2017
Wednesday Get Over the Hump Free for All 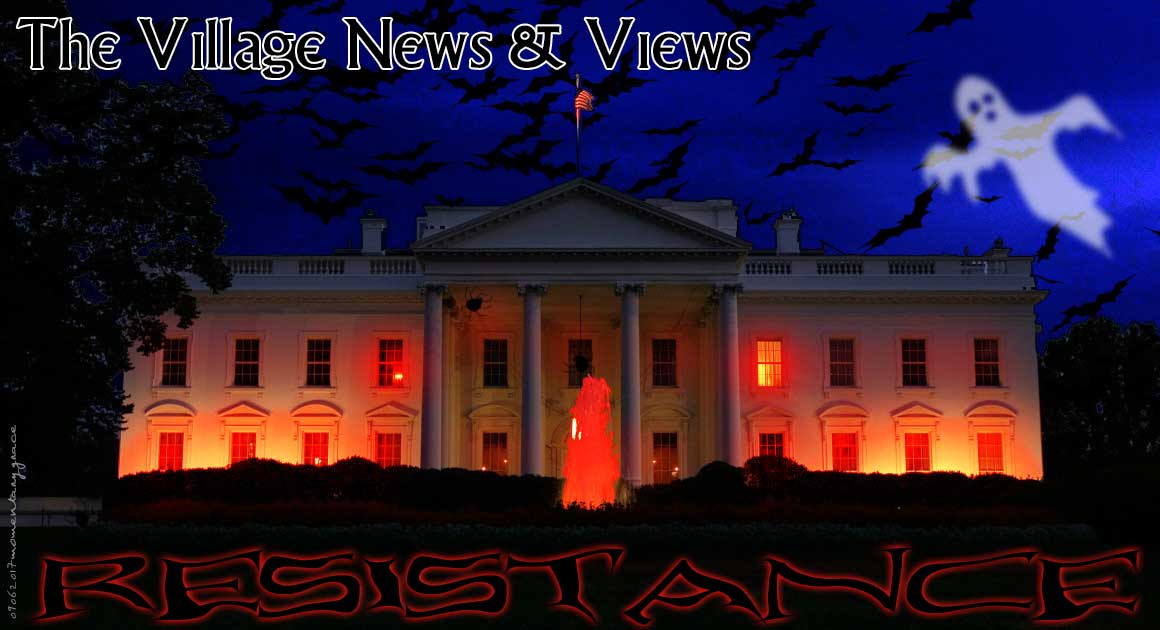 Greetings, Village Meese. It’s Day 230 of the Resistance and time for another Get Over the Hump post and discussion thread.

Nothing special today, mostly DACA with… oh… the banner?

Well, in case you hadn’t noticed, the stores are already putting out their seasonal candy and spooky merchandise even though it’s barely September. To tell you the truth, that’s okay with me. I love Halloween… Samhain… Dia de los Muertos… Whatever you choose. I’m not sure why October 31st became my favorite holiday, except perhaps that it wasn’t attached to so many conflicts some of the later in the year celebrations are heir to. Thanksgiving is problematic if you acknowledge that the arrival of the Pilgrims didn’t turn out so well ultimately for the Native Americans. Christmas has been a subject of contention for a number of reasons, not the least of which it has become a banner for the Right.

In any case, with a veritable living pumpkin inhabiting our nation’s highest office, the White House seems to have become a bit of a haunt.

As people in Florida brace for Hurricane Irma, we must prayer + support our brothers + sisters in Puerto Rico + throughout the Caribbean. pic.twitter.com/XxPzEvXWJ3

While we recover from Hurricane Harvey, please add Puerto Rico in your prayers as our Astros brothers' families are bracing for Irma.

10% of US #DACA students are in #Houston. We all lose without them. I join community leaders with @HispanicHouston to support #DACA pic.twitter.com/X1lfCnF4Yp

DREAMers are American, plain & simple. DREAMers like Alonso have more courage than Trump could ever hope to have. https://t.co/SPdwlrHZyy

In '41 the govt relocated 120K Japanese Amers to internment camps at huge economic & psychic cost. Trump would deport 7x as many Dreamers.

No time to waste – we've got to fight with everything we've got to #DefendDACA. Thanks, @jorgeramosnews, for sharing these powerful stories. https://t.co/rNtZZ4ONBy

Re: the "rule of law" arguments, much of the "law" is NOT IMPARTIAL. Not by a long shot. Ask your friends of color about it.

Michelle Obama dressed up as Beyoncé For Beyoncé's birthday and, NBD, but it's perfect https://t.co/dp2mh4FzEw pic.twitter.com/CXs672b2Cf

We only rate dogs. This is quite clearly a smol broken polar bear. We'd appreciate if you only send dogs. Thank you… 12/10 pic.twitter.com/g2nSyGenG9