The Village News & Views September 13, 2017
Wednesday Get Over the Hump Free for All 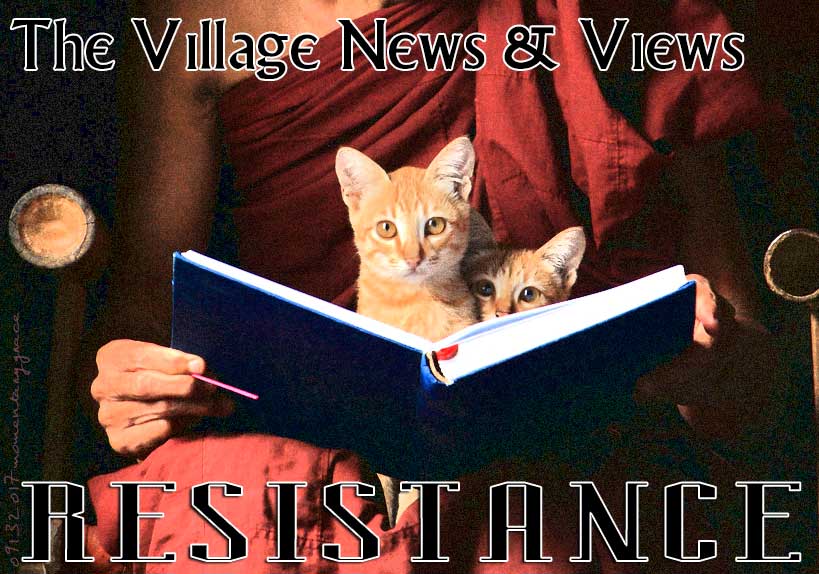 Greetings, Village Meese. It’s Day 237 of the Resistance and time for another Get Over the Hump post and discussion thread.

I know about books! I worked for 10 years at a public library! First, I shelved them, then I checked them out to people, then I supervised the circulation desk of a branch library.

I was surrounded on all sides by books!

Before that, I read a lot of books. Book were my friends, educated me, kept me company when I was lonely (and I was lonely a lot), fed my imagination and gave me comfort.

So I’m down with books.

Nowadays, I read digital format. I love being able to carry 50 books around in a small tablet form. I used to carry thick paperbacks around everywhere but that was quite a while ago. Hardbacks rarely, since I’ve generally had to watch my spending. Also, they are arm and shoulder breakers.

Books can carry all kinds of information, and some of that information is very useful and helpful to the Resistance.

Wonkette – The 19 Books Hillary Clinton Should Write Next

The moment you get @HillaryClinton 's new book- & you realize you're in the book. Ana you are so loved. #WhatHappened #GoodReads #lovewins pic.twitter.com/d1OIp1hN3p

No one's doing anything this morning but reading #WhatHappened or waiting in line to see Hillary.
Sorry, haters.pic.twitter.com/3IOo6mLCNd

When @HillaryClinton sends you pizza… https://t.co/RJdXSR5Pan

Hillary Clinton, the First Woman to Win a Major-Party Presidential Nomination, Can Talk About It If She Wants To https://t.co/7hD0ugwAj5

The Passing of a Fighter

Edith Windsor will be remembered as a great American civil rights hero. #ShePersisted & showed the world that #LoveIsLove. Rest in Power. pic.twitter.com/Anhfps4LQ7

Edith Windsor made this country better. Her courage means millions of Americans can now marry the person they love. #LoveWins

America lost a hero today. You were a trailblazer for the generation of LGBTQ activists we see making change today — thank you, Edie. pic.twitter.com/vPx5QCsqJV

We owe DREAMers for their patriotism & courage to come forward. This is a fight about who we are as a country. We must pass the #DREAMAct. pic.twitter.com/uEqJqzddf0

What do astronauts do on @Space_Station? Science! Listen to “Houston, We Have a Podcast” & learn about @ISS_Research https://t.co/kSMRyFRwmQ pic.twitter.com/sD8NvEynVt

Here's a doggo who's rather h*ckin startled by the moving stairs. Puppreciates the assistance good sir. 14/10 pic.twitter.com/c74xxEs51B