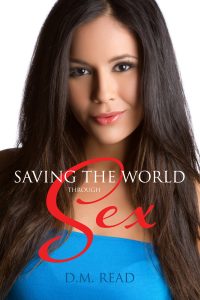 The mission of the International Tarts Society is to prevent world leaders from declaring war by distracting them with the delights of sex. Although they work as office assistants during the day, at night the Tarts’ assistance becomes quite personal. Carmela Sandoval, twenty-two, accepts the most important mission of all: that of distracting the president of the Deeply Divided States of Vespuccia. Will she succeed?

At first dismayed that the president hardly seems to notice her, Carmela finds ways to dazzle him with her feminine wiles. As time goes on, the president’s increasingly erratic behavior convinces Carmela that he will soon involve the country in a world war. Her decision to employ the ultimate Tarty Technique to stop him results in a shattering climax that changes world history.

Prunella Parsons was having a bad—no, a really horrible—morning at The Mansion. Not only had Blackie Hart, her ex-boss and the current Mansion Chief Policy Strategist, told her sharply to do a better job of entertaining foreign dignitaries, but Dooby McManus, the Mansion Chief of Staff, had cut her budget.

It would be simply impossible to bring off the state dinners, not to mention the numerous minor functions she was expected to mastermind as the official Mansion hostess, on such a reduced budget. As the niece of the recently elected president of the DDSV she was serving as Mansion Social Secretary and hostess because Venetia, the wife of President Eric Tayshun, refused to leave the luxurious family-owned apartment building two hundred miles away. Her excuse was that Goldie, the couple’s teenaged daughter, could not be torn from her friends and fellow students at the expensive private academy where she’d just begun her freshman year of high school.

Not only did she have problems with Blackie Hart and Dooby McManus, but Prunella also had issues with the president himself. Although she was married to his nephew, Zebulon Parsons, who served as Special Adviser to the President, Eric Tayshun apparently saw nothing wrong with harboring incestuous longings for his female relatives. Whenever he hove into view he leered at Prunella, and when he wanted to emphasize a statement, he patted her derrière. Only yesterday, when he’d encountered her in the hallway, he’d kissed her on the lips. She knew the fact she was married meant nothing at all to him, but now she wondered uneasily if he had a thing about nieces. Rumors in the corridors of western history whispered that both Adolf Hitler and General Patton had had a thing about nieces, even going so far as to actually—no! She refused to go there, even in her mind.

Prunella shook herself impatiently. There was work to do, although she couldn’t help sighing when she thought of how simple her workdays had been before the election. Three months ago she’d been working for Blackie, who obliged her to spend her days thinking up ad copy for the campaign: “Save the nation/Vote Eric Tayshun!” “Keep the DDSV free/Vote for Eric T.!” and other such asinine slogans.

“Ms. Parsons, an applicant is here to interview for the position of your assistant. It’s Miss Sandoval.”

“Send her in,” Prunella said. How tedious: now, instead of working on the state dinner slated for next month, she’d have to lose an hour talking to this applicant. On the other hand, perhaps the applicant would turn out to be the perfect person for the job. Heaven knew she needed help. She looked up as the door of her office clicked open and the receptionist ushered Miss Sandoval in.

Prunella stood up, came around her desk, and shook hands. Too pretty, she thought immediately, then checked herself. The applicant was evidently trying to tone down her appearance by wearing a prim brown tweed suit with a high-necked ecru blouse, and a severe hair style that pulled her dark tresses into a French twist. However, Prunella’s sharp eyes detected the lissom figure inside the suit, the luster of the luxuriant hair, the long-lashed eyes that even dark-rimmed glasses couldn’t disguise. She wore only enough makeup to conform to societal norms.

“Yes. Thank you for taking the time to talk to me this morning. I realize how busy you must be,” the applicant said. “Oh, in case you haven’t had a chance to review my resume, I have a copy here.” She pulled a sheet of paper out of her bag and handed it to Prunella.

“Think nothing of it. H’mm, I see you have a degree in world geography and you speak five languages, correct?”

Aloud she said, “You graduated from a university in Germany. Why did you go to school in a foreign country?”

Miss Sandoval opened her eyes very wide and smiled. “It was free. That’s why I learned German. I hoped I’d be good enough to get into a college over there, and of course, attending that particular university really helped my major in geography and my minor in languages. I traveled extensively during vacations.”

“Impressive,” Prunella said again. Quickly she made up her mind. This applicant would do. With her background she’d be able to deal with almost anything, including excitable foreigners. “Miss Sandoval, I’d like to offer you the position, which, of course, is contingent on your reference check. I see you already have a security clearance.”

“Yes, that’s right. I’d really like to work for you, Mrs. Parsons. This is an exciting opportunity and I’d love to help lighten your workload.”

That settled it. The Latina background was a little awkward, considering the president’s attitude toward people of that ethnicity, but fortunately, he was unlikely to bump into Ms. Sandoval in the ordinary course of business.

In the weeks that followed, Prunella’s hopes were fulfilled. The first week, of course, was spent showing Carmela the routine of the office and how the communications system worked. Carmela learned quickly, came to work on time, and volunteered for even the most tedious tasks, such as filling out the Acceptances spreadsheet for the state dinner. By Friday afternoon Prunella was sharing her frustrations concerning the menu, the decorations, and the music for that occasion.

“President Tayshun has invited the president of Mexico to the Mansion. Of course they absolutely loathe—that is to say, they’re barely able to be polite to each other. But with the severe budget cuts, I don’t know what on earth to put on the menu for dinner!” Prunella raised her eyes to the ceiling. “The budget simply won’t run to the usual Mansion fare for a state dinner, and as for flowers, I have no idea what we’re going to do. We can’t even go out and pick them from the All-White Garden, considering it’s late February.”

Carmela considered for a few minutes. “I have an idea. What do you think of this? Why not honor the Aztec history of Mexico by using the ‘Three Sisters’ theme for the dinner? You know, base the menu on squash, corn, and beans. It would be a subtle compliment to the Mexican president, and dishes based on the Three Sisters would cost a lot less than filet mignon, truffles, and caviar.”

Prunella’s face lit up. “Brilliant! Will you do the research and give me suggestions for a menu? Then we can hammer it out with the Mansion executive chef and start thinking about decorations.”

“I’ll have it for you by Monday morning,” Carmela promised.

At the beginning of the next week Prunella ran her eyes over the menu Carmela handed her. “Okay, we begin with Corn Soup with Chipotle Sour Cream—there’s our soup. For fish, Lemon Garlic Shrimp Tostada, good. For the entrée, Chile-Rubbed Roast Turkey, Stuffed Peppers with Quinoa and Black Beans, and Cuernavaca-style Cucumber Salad, good. And two desserts, Pumpkin Cheesecake and Mexican Chocolate Torte. Why two, Carmela?”

“To give the impression of opulence,” Carmela said. “Also, it will make the guests feel spoiled, having two to choose from. And don’t forget, both chocolate and pumpkin are New World foods. The Aztecs definitely used them.”

“And they don’t look too expensive, either,” Prunella said, flipping through the sheaf of recipe printouts Carmela handed to her. “Oh, what a load off my mind! This will be a small dinner as state dinners go. We’ll have no more than fifty people in all, including the Mexicans and the president’s own staff.”

“Good heavens, no,” Prunella said. “He’ll eat the occasional taco salad, but basically he prefers hamburgers and fries. Well, he’ll like the cheesecake. His home town is famous for it.”

“This particular cheesecake has caramel sauce and rum-infused whipped cream with it,” Caramel said. She smiled as she thought of the pun on her new nickname.

“Sounds good, but leave the rum out of the whipped cream. He doesn’t do alcohol.”

For the next hour they discussed the wines and other drinks that would accompany each course and the Mexican-accented coffee that would end the meal.

“You’re a godsend, Carmela,” Prunella said. “Thank heavens you walked through my door! I think I might actually get some sleep tonight. Oh, who’s in the hallway? Why, I believe it’s—”

The president of the DDSV strolled through the door accompanied by several of his staff: Dooby McManus, a dapper little man who looked as if he’d just climbed out of a bandbox, Blackie Hart, who resembled a lumbering bear in an ill-fitting suit, and two agents from the Nervous Service. “Good morning, sweetie, how are ya?” he asked, bending over Prunella’s desk.

The president turned his head to look at Carmela. “Pleased to meetcha. Now, Prunie, I need you to do me a favor.” He bent down to whisper into Prunella’s ear. “Can ya do that for me?”

“Why, certainly, Mr. President, I’ll take care of it right away.”

Dooby McManus fidgeted from his position near the doorway. “Not to rush you, Mr. President, but we’re due at a meeting of the Joint Chiefs in the Crisis Room in exactly two minutes!”

The president and his entourage surged out of the room, leaving Prunella frustrated yet again.

“Carmela, the president just asked me to make sure that Zeb and I will be seated at his right hand so he doesn’t get bored during the dinner. So that means you will have to act as hostess in my place.”