The Weekly Democratic Party Address is being managed by the Senate side of Congress this week and is not available at publication time. So here is a video from a few weeks ago with Senator Kamala Harris throwing down the gauntlet on the DREAMers.

VIDEO
(10/25/2017: Speaking at a press conference alongside a group of Senate and House Democrats, and University Presidents and Chancellors in support of the Dream Act, U.S. Senator Kamala D. Harris today pledged to vote against any end-of-year spending bill if it does not include a solution for the more than 700,000 recipients of the Deferred Action for Childhood Arrivals (DACA) program.) 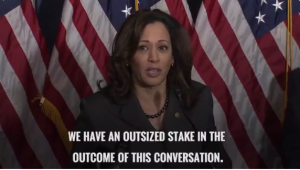 We’re all awaiting the next version of how the Republicans in the House of Representatives will rip off the middle class in our country. In the meantime, it was curious to see President Trump in China.

Candidate Trump said that what’s happening in China trade was ‘the greatest theft in the history of the world.’ And yesterday, he said our trade deficit with China, which is huge, is not China’s fault. You can almost hear the leadership of the Chinese Government laughing from China to America. Maybe you can feel it coming through the ground, because if you dig a hole here you will reach China. But the reverberation is so appalling.

And as I said yesterday, was that yesterday? While the President is there with his entourage of CEOs cutting deals, the Republicans in Congress are here giving those same corporations, those same CEOs, CEO‑led companies a tax break to ship jobs overseas.

Representative Chris Collins this week said, ‘my donors are basically saying, get it done or don’t ever call me again.’ Senator Lindsey Graham said ‑‑ this is really – ‘the financial contributions will stop’ if the tax scam fails. He said the tax scam fails. The GOP tax scam isn’t written for the middle class; it’s written for the wealthy donors and corporations shipping jobs overseas.

And these three, one adviser to the President, one House Member, one Senate Member, spoke truth. The people happiest about this are the CEOs. But the other truth is 38 million households, middle class households are facing a Republican tax hike. Thirty‑eight million households. So while they say this is for the middle class, it is not.

And now we understand that the Senate version of the tax plan is reported to have eliminated ‑‑ in other words, they are keeping the full SALT [state and local tax] deduction elimination in the plan. So whatever the Republicans in the House thought they were throwing a few crumbs to some of their Members to get them to walk the plank, that is not what is in the Senate bill.

So it’s really a stunning thing. If they think that this is the bill that they must pass in order to stay in power, they have it all wrong. The public is hearing the truth. The public is paying attention. You saw what happened in Virginia. They should be worried, very, very worried. And now we’re very worried about what they might have in their alternative. We’re very proud of the leadership of our Ways and Means Dems, led by [Congressman] Richie Neal of Massachusetts. I’m pleased to yield to him.

Today, we’re being asked to vote on a manager’s amendment which will fundamentally alter many of the precepts and the arguments we’ve had during the last three days as they attempt to change it, and I’m guessing to make for greater harmonization with the Senate. Now, at the same time, nobody knows what’s in the bill. We certainly haven’t seen it; and the Members of the Republican side, they haven’t seen it. But we’re going to that legislation, where there will be a limited opportunity for us to even ask questions.

What you want to think of, I think, as you look at the proposal that they have; we’re being asked to repeal the estate tax so that we can pay for getting rid of the tax that the sickest in America, the deduction that the sickest people in America take advantage of to pay their healthcare bills.

Yesterday, one of them said, oh, so students can have $200 worth of interest deductions a year. There’s $1 trillion worth of student debt in America, $1 trillion worth of student debt. Today, this morning, hundreds of thousands of people have benefited for the historic tax credit, gone. We’re looking at new markets tax credits, gone. Shaving back municipal tax exemption, gone. And they’re arguing that this spurs economic development.

So as you have a chance to put the magnifying glass on what they’re about to do, which we’re all anxious to see, you can see how this was bad on policy and it was bad on process. And I think that the Members in there that are about to cast their vote on this, they have no idea what is in this legislation. And they have been reacting to press accounts, I think it’s a fair statement, every day. As the press has reported what I think is the liberties that they’ve taken with accuracy, they come back and they revise it.

And last night, we were told we were going to work until midnight. We left at 7 o’clock last night, so this piece of legislation could be redrafted and presented today. We have not even seen it yet. It’s not done.

Leader Pelosi. This new draft, whenever it comes, appears to be an act of desperation by them. They clearly didn’t have the votes for what they were proposing already. An act of desperation. But it’s also an act of misrepresentation to the American people. It’s a Friday afternoon special. Why don’t we do it where there’s the least opportunity for people to review it. Let’s do it very fast, very fast, speed of light in the dark of night and back rooms, without even their own Members. And what an insult to the intelligence of their own Members, what an insult to the intelligence of the American people, as they make an assault on the middle class.

The GOP tax scam will hurt millions of Americans burdened by student loan debt and prevent teachers from offsetting a small but vital portion of the cost of classroom supplies paid for out of their own pockets, while special, deficit-exploding giveaways will be preserved for the wealthiest.

Here (at link) is what the student loan interest and educator expense deductions looked like in 2015 in all 50 states. Instead of proposing what they have claimed over and over again to be a ‘middle class bill,’ Republicans are pinching these pennies to give more money to the wealthiest one percent and to corporations shipping American jobs overseas.

Nancy Pelosi met with constituents in San Francisco and addressed the Negative Impacts of the GOP Tax Scam. Excerpts:

This is a very important debate for us. We would love to change the bill. But in order to change the bill the Republican Members of Congress have to see how destructive it is to their community – and this is very important in California because this bill – this tax scam that Republicans are forcing on the Congress very destructive to California for reasons I will go into. But it’s very hard to understand why all 14 Republicans voted against California in the Bill. […]

It’s important to also note in relationship to fires that these for Members, all 14 of them, voted for a tax bill that says the following, ‘if you have property loss etcetera because of the Hurricanes you can deduct your losses from your taxes, but not from fires.’ Is that stunning? Is that stunning? Isn’t the mean spirited? What’s that all about? And these Members all voted for a budget that does that. And some of them are on the Ways and Means Committee that reinforced that message again.

6 comments for “Fighting Back: “The Republican #TaxScam will raise taxes on millions of middle-income taxpayers””