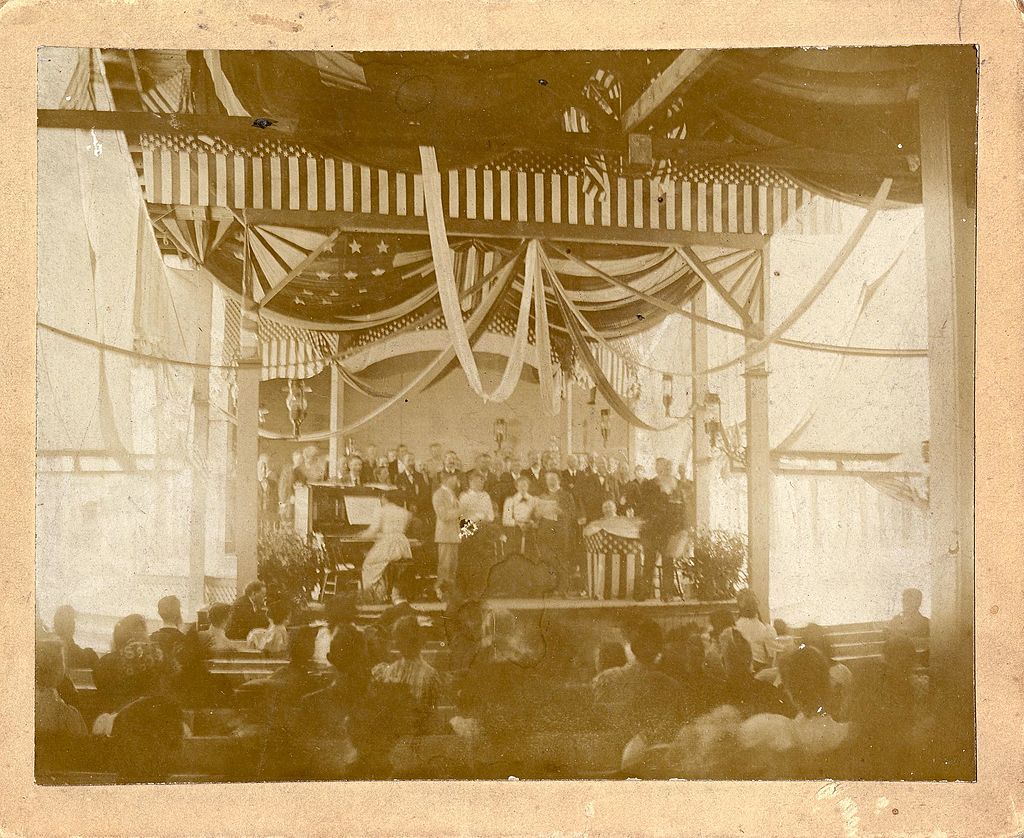 A Fourth of July celebration back in the day; we can still raise our voices today.

I’m not gonna lie…as I followed the unfolding of the Senate passage of the #GOPTaxScam last Friday night, I became so stressed, upset, and angry that I ended up throwing up in my kitchen sink.  I discovered a burning core of hatred within me which quite frankly frightened me.  As a result, I took the weekend off from politics, spent some time reflecting on whether hope was even possible, and re-centered myself by remembering my core values, which do not include hatred or violence.  What follows is the product of those efforts in tweet form.
First things first…it’s ok to be angry.

FUCK YOU @GOP and all those who support you. I don’t give a rats ass if people unfriend me, this is personal. Cutting my medicare, my SSI because I’m disabled due to no fault of my own. You’re a bunch of corporate greedy fuckers who don’t give a shit about the american people

It’s not over yet.  Use your anger.  Recommitting to action helps.

And like that, House conservative say they have no plans to accept the compromises that Collins and Flake secured in exchange for their tax bill votes. https://t.co/NXcCjHV9nF

The bill has to be revoted in the senate if it changes. It also has to pass Byrd rules again. It could die if Flake & Collins bolt. #GOPTaxScam https://t.co/FI4lrgIhb1

Some names to remember; if one of these is your MoC, let them know (repeatedly) what you think.  Holds true for all MoC, of course, but these are key.

PELOSI names her conferees on the tax bill pic.twitter.com/ykRr1MrPNG

NEW: Senators in Maryland, California, New York, and New Jersey urge the 29 House Republicans in those states not to raise taxes on their own constituents. https://t.co/SMSmXH6NVO via @rollcall

Six thousand lobbyists are alleged to have helped on the #GOPTaxScam while Dem senators were shut out.  We don’t know who they were yet, but we know these guys were likely involved.

And now a few messages to the “Religious” Right who claim that charity (in the religious sense) is strictly a personal responsibility and not the business of government:

If the Bible is so against systemic solutions to poverty, why is a jubilee year declared that releases people from debt to alleviate intergenerational poverty? What is leket, skikhah, pe’ah, and maasar if not taxes meant to create a safety net for those in need? 1/ https://t.co/NmHs3NMrld

The US will soon face the consequences of a #TaxBill that takes money from the poor to give to the rich. Those who voted for it will face consequences later, when they are judged. Do you think Jesus’s words about being judged on how we care for the poor don’t apply? Think again.

And if you need a break, take one.

Rest your precious self.

Do a few things that refill the well—not that numb you out, but that bring you joy, make you feel alive or reconnected with yourself.

Spend time with people who really see you and love you for who you are.

You’ll be back in it soon enough. https://t.co/N7uLdPk7yf

Two things I think the world could use more of right now: art & laughter. Act accordingly

(Here’s a quick smile for you.)

Sometimes it’s hard to know what to do after a loss. Not this time.
This tax bill is only going to get worse as people learn more about it. There are 6 GOP Senators that have to run on it & 2 open seats in 2018. We all need to get to work.