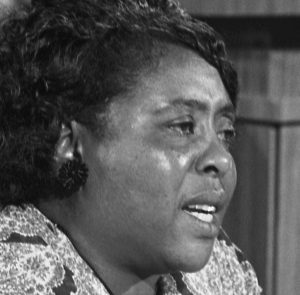 I didn’t watch the Golden Globes on Sunday, but I have watched Oprah’s speech. For me, the line that resonated the most is the sentence used as the title of this post: “What I know for sure is that speaking your truth is the most powerful tool we all have.” I was also gratified that Oprah recognized and honored Recy Taylor. Today I’m going to focus on another woman who spoke her truth, Fannie Lou Hamer, but instead of providing a bio and background information, which is readily found on the internet, I’m just going to let her speak.

The transcript of her remarks:

My transcript of this brief video:

The man, my opponent, James Earl [sic] Whitten…has done nothing to help the Negroes in the Second Congressional District. How … Mr. Whitten used his power in the Congress last year; he used it to prevent the distribution of Federal commodities in counties throughout the Delta, leaving people hungry. People naked. He’s not doing anything for us. And it’s time now, as he was not representing all the people, because he wasn’t representing the Negroes at all. It’s time for us to do something about that. And we need your support. We need your vote, because if I’m elected as congresswoman, things will be different. We are sick and tired of being sick and tired. For so many years, Negroes have suffered in the state of Mississippi. And we are tired of people saying we are satisfied, because we are anything but satisfied.

Transcript not available, but I have transcribed some excerpts:

Missippi is still a very rough place. People is not just walking up like they used to do in the past; walking out, you know shooting a man down and getting maybe two or three hundred people carrying out a lynching. It’s in a more subtle way. They let you starve to death, not give you jobs. These are some of the things happening right now. See, Mississippi is not actually Mississippi’s problem. Mississippi is America’s problem, because if America wanted to do something about it: “What has been goin’on, Mississippi?”, it could have stopped by now…
…All of the burning and bombing that was done to us in the houses; nobody never said too much about that, and nothing was done. But let something be burned by a black man, and then, my god, you know? You see the flag is draped with our blood. Because, you see, so many of our ancestors was killed because we have never accepted slavery. We had to live in it, but we never wanted it. So we know that this flag is draped with our blood. So what the young people are saying now, “Give us a chance to be young men, respected as a man, as we know this country was built on the black backs of black people across this country. And if we don’t have it, you ain’t gonna have it either, because we gonna tear it up.” That’s what they’re sayin’. And people ought to understand that. I don’t see why they don’t understand it. They know what they’ve done to us. All across this country, they know what they’ve done to us. This country is desperately sick, and man is on the critical list. I really don’t know where we go from here.

I hope listening to Mrs. Hamer motivates you to do further reading about her inspiring activism (this article is a good starting place: Civil rights crusader Fannie Lou Hamer defied men — and presidents — who tried to silence her). Her truth was born out of unrelenting poverty, indescribable barbarity and cruelty, and a spirit of determination born of her faith and fortitude. When she spoke her truth, she changed our world.

12 comments for “VNV Tuesday: “What I know for sure is that speaking your truth is the most powerful tool we all have.” 1/9/18”