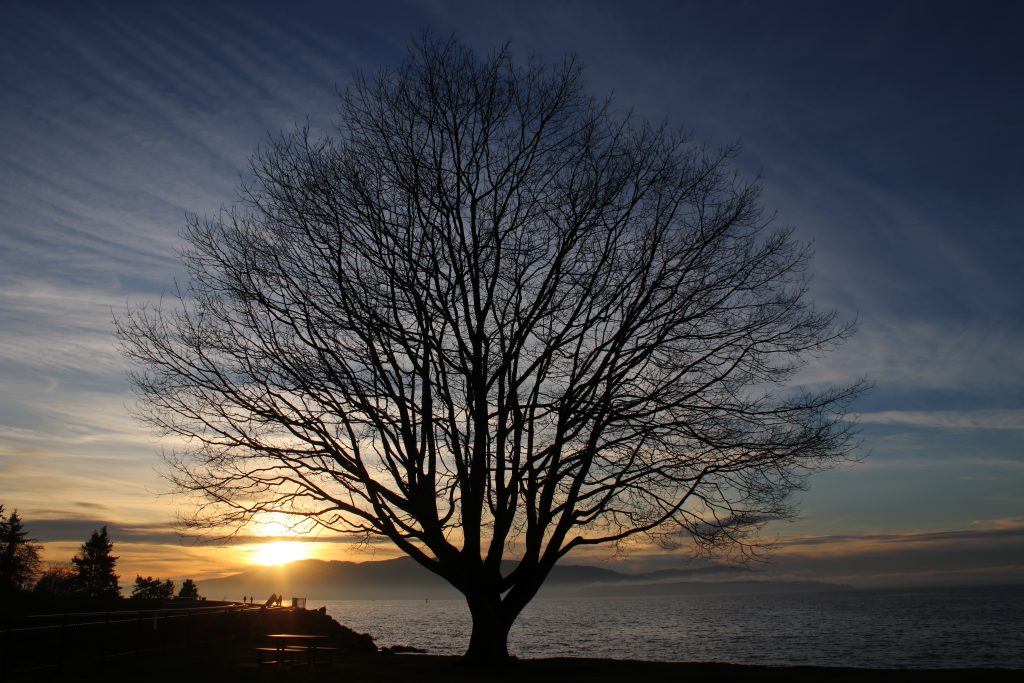 I have a favorite tree. It is a Scarlet Oak (Quercus coccinea). The scarlet designation comes from its bright fall red foliage that will be apparent when we get to October.

The Scarlet Oak is native to East and Central US. It is a beautifully shaped tree and is often used as a featured ornamental in landscaping as it is here in a city park situated along Bellingham Bay.

I have enjoyed this tree for a long time and have photographed it off and on as time presented and as I watched the sun move across the bay and the islands. The sun traverses the bay arcing through the year to one solstice and then back again. As the sun changes its position across the seasons the tree changes its persona as the sun journeys round the bay. This is a tree for all seasons with the bay, the San Juan Islands, the Lummi Peninsula and sunsets as its backdrop. The park is Marine Park, one that I have photographed  over the years. However, I have never given this magnificent tree the due that it deserves until now.

Although Phenology is a concept  that most readers know although many don’t have a sname for it. So, good ole Wikipedia helps us out and  tells us that the term…

” …is from the Greek φαίνω (phainō), “to show, to bring to light, make to appear”[2] + λόγος (logos), amongst others “study, discourse, reasoning”[3] and indicates that phenology has been principally concerned with the dates of first occurrence of biological events in their annual cycle.

This post will show the comings and goings of this tree’s phenologic changes from solstice to solstice. It is also a solar romp across the seasons and of course the two are intimately related.

Marine Park is popular and as you will see, numerous human activities happen in and around this tree including picnics, tree climbing, beachcombing, shell picking up, kayaking, kayak polo competition and sunset watching. We also watch various working and pleasure boats passing to and from the islands such as the Alaska Ferry on Tuesdays and Fridays and the occasional freighter transporting logs to China and frozen foods to Russia. 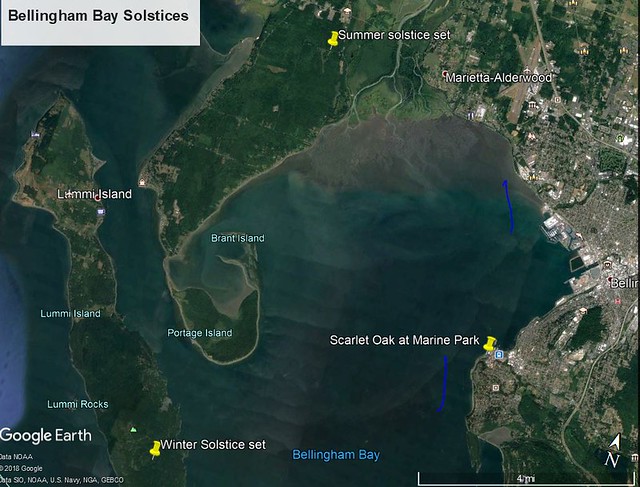 I do not have a specific photo of each month or when each leaf appeared and fell. but I do have some to illustrate the seasons and the tree’s phenology. Many of the photos are largely silhouettes as they were taken at sunset to illustrate where the sun went down. Also you will note that the photos are taken at somewhat different orientations to the tree in order to get the sun in as it set and moved across the islands over time.

We start at December and the Winter Solstice when the sun sets furthest south (234°).  However, its earliest set is actually a few days before the solstice when it sets two minutes earlier. But it is a very short day with only 8 hours, 15 minutes and 49 seconds of daylight. 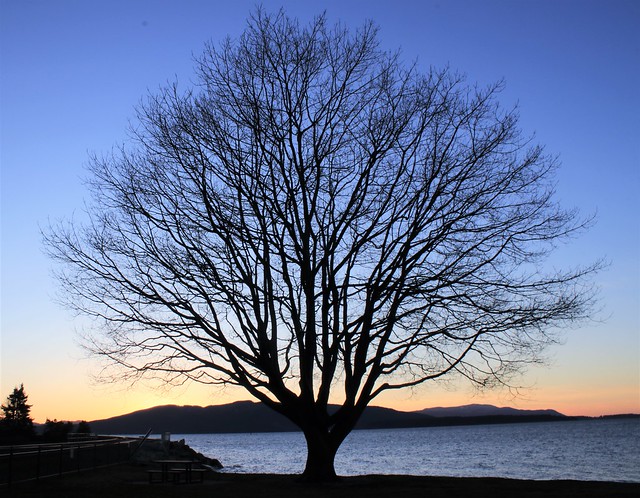 I have a second favorite tree at the park too. It is a European White Birch (Betula pendula). Although some Birch trees are native to this area, this one is an imported ornamental. 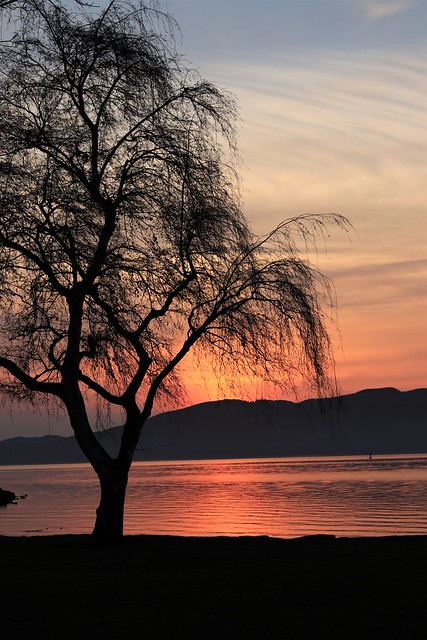 And lest you are left with the impression that the sun always shines up here in the PNW, check this foggy December shot. 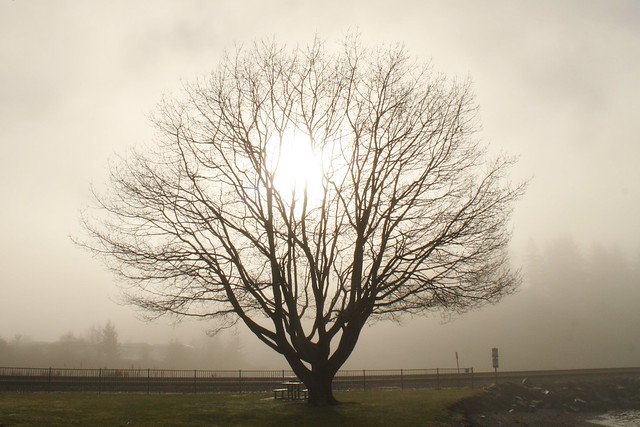 By February the sun is staying up another 22 minutes and is moving to the west, setting at 254°. 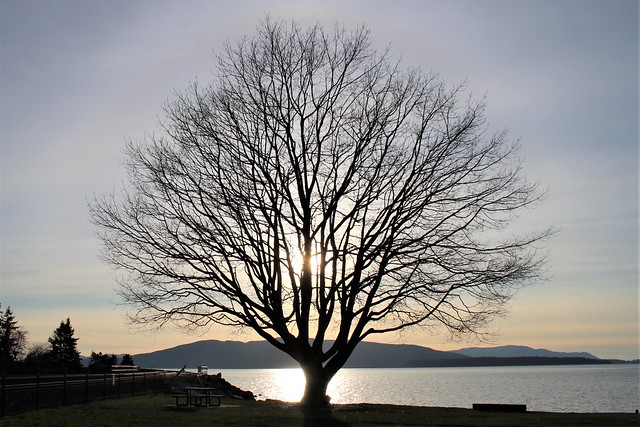 February 19, setting soon at 5:37pm. Lummi Island directly behind and Orcas Is. to the right

Moving along to March we see some significant change. In the photo below you can see that the setting sun has moved pretty much the length of  Lummi island and is setting behind Orcas Island. It is setting at 6:01, 24 minutes later than the previous photo. 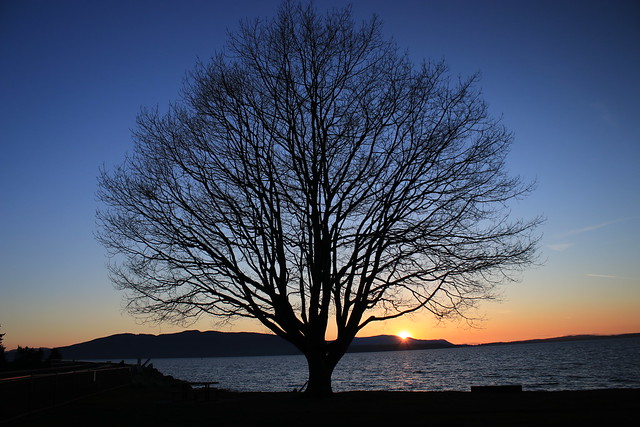 From this March 6th shot, we can not yet see any budding but we know the tree is itching to get some clothes on. 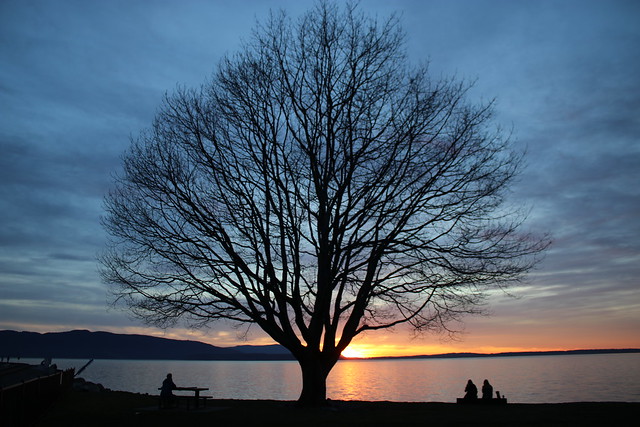 About a week later, March 12, the sun has continued to move westward, now setting at 266° and  at 7:10 (DST). No phenological change yet but just wait. 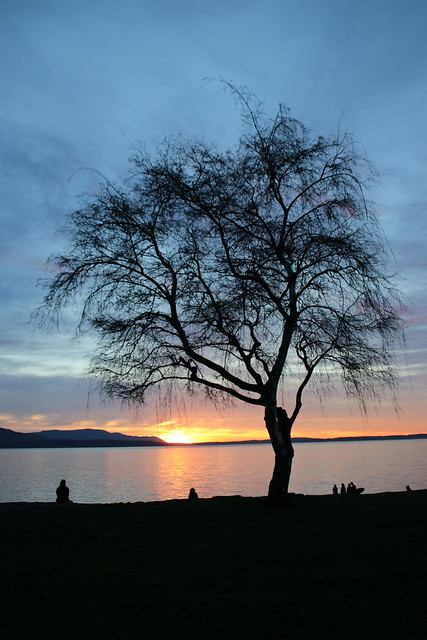 The White Birch is waiting too on the 12th.

Both the tree and local kayakers are starting to come out their winter’s hiding. It is April 17th here, the tree is starting to bud out and local kayak polo competition is now on just off the park’s beach.  And of course the sun has now moved past due west and is setting here at 287° at 8:01 pm. 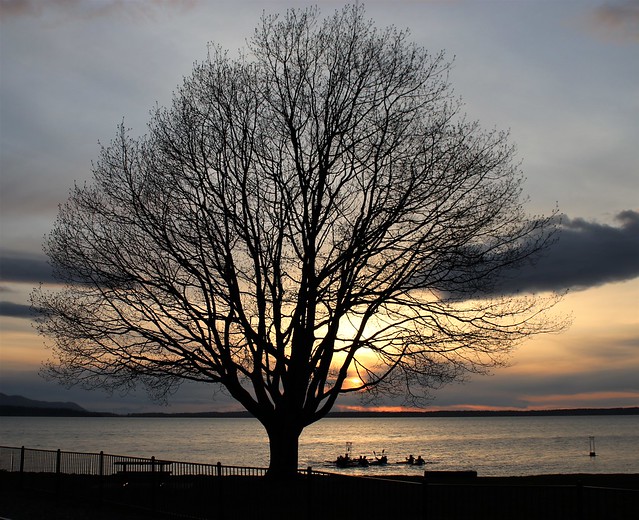 Kayak polo teams competing at sunset under the budding Oak.

May brings the tree to fuller leafing as people bundle up to watch the sunset. 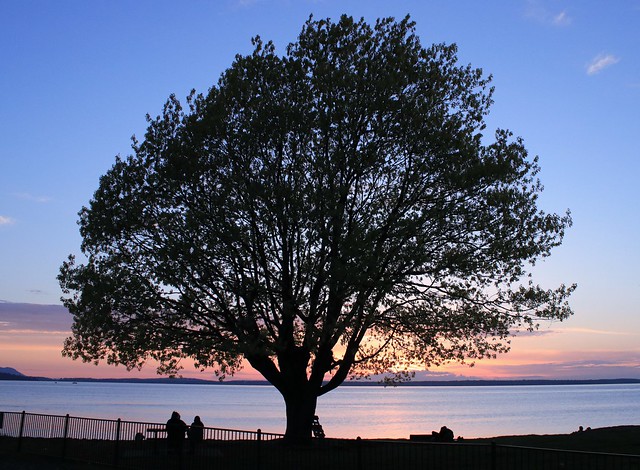 May 6th and the oak tree is continuing to feather itself. A few clouds to the west partially obscure the sun setting but provide some pastels.

A week later and the tree is just about fully leafed and the sun continues to roll north. 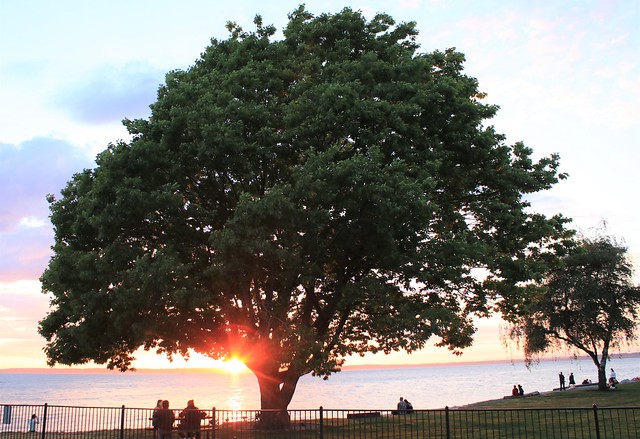 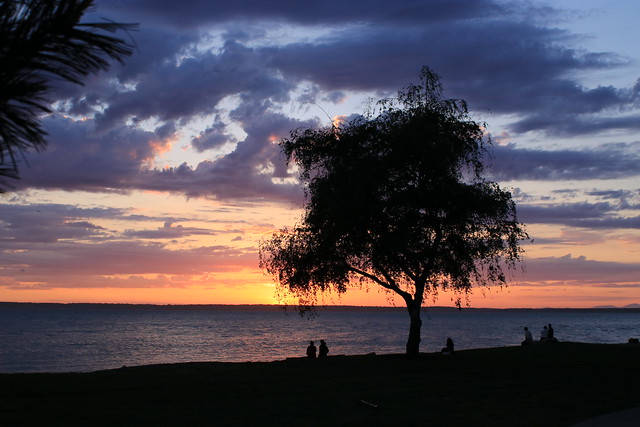 Summer solstice is technically June 21, although length of day on the 20th is virtually identical, differing by just a small fraction of a second. 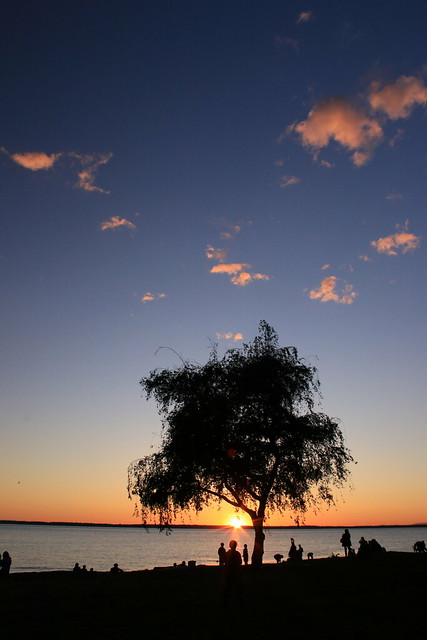 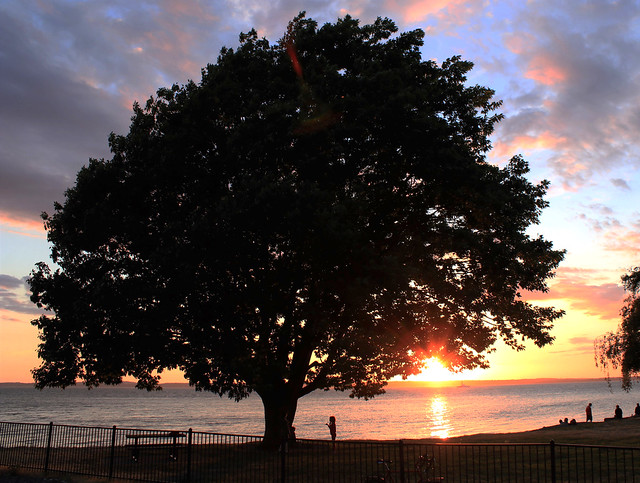 The end of Spring and the beginning of Summer with the Scarlet Oak outfitted to the nines for the Solstice, June 21st. 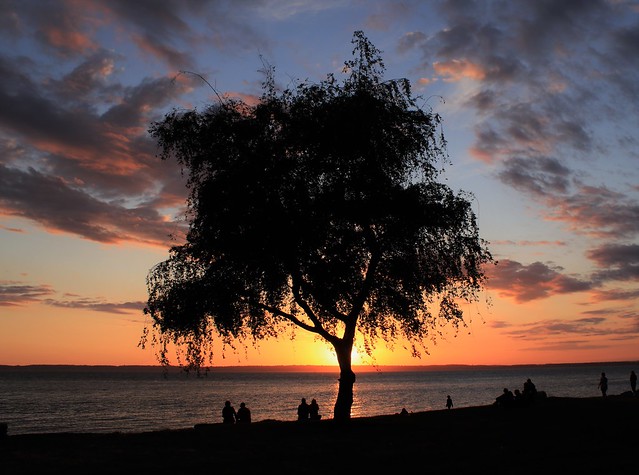 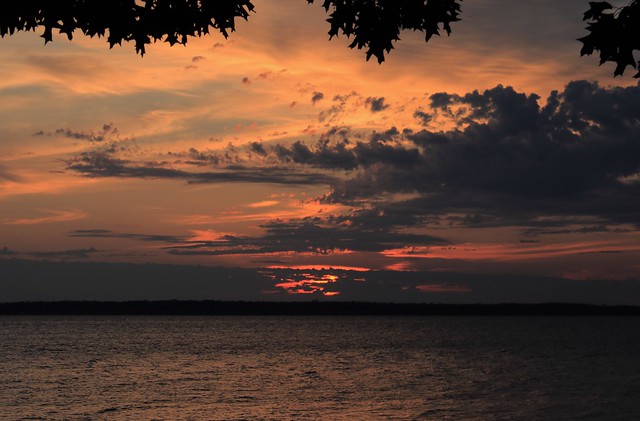 One last shot from under the oak tree at Spring’s end. Sun setting at 308°, over the Lummi Peninsula

We have to wait all the way into October to see why this wonderful tree has the moniker of “Scarlet Oak.” It is clearly aptly named. 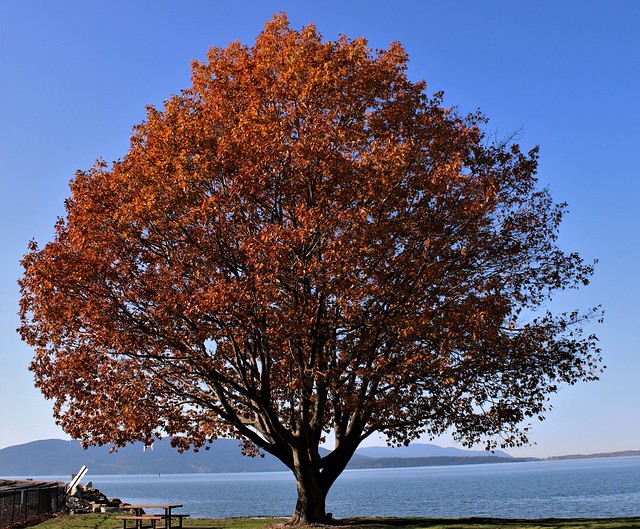 Scarlet Oak in its eponymous colors on a bright October 30th

And there you have it – Bellingham Bay and the Scarlet Oak across the seasons with and without finery. A great tree either way.