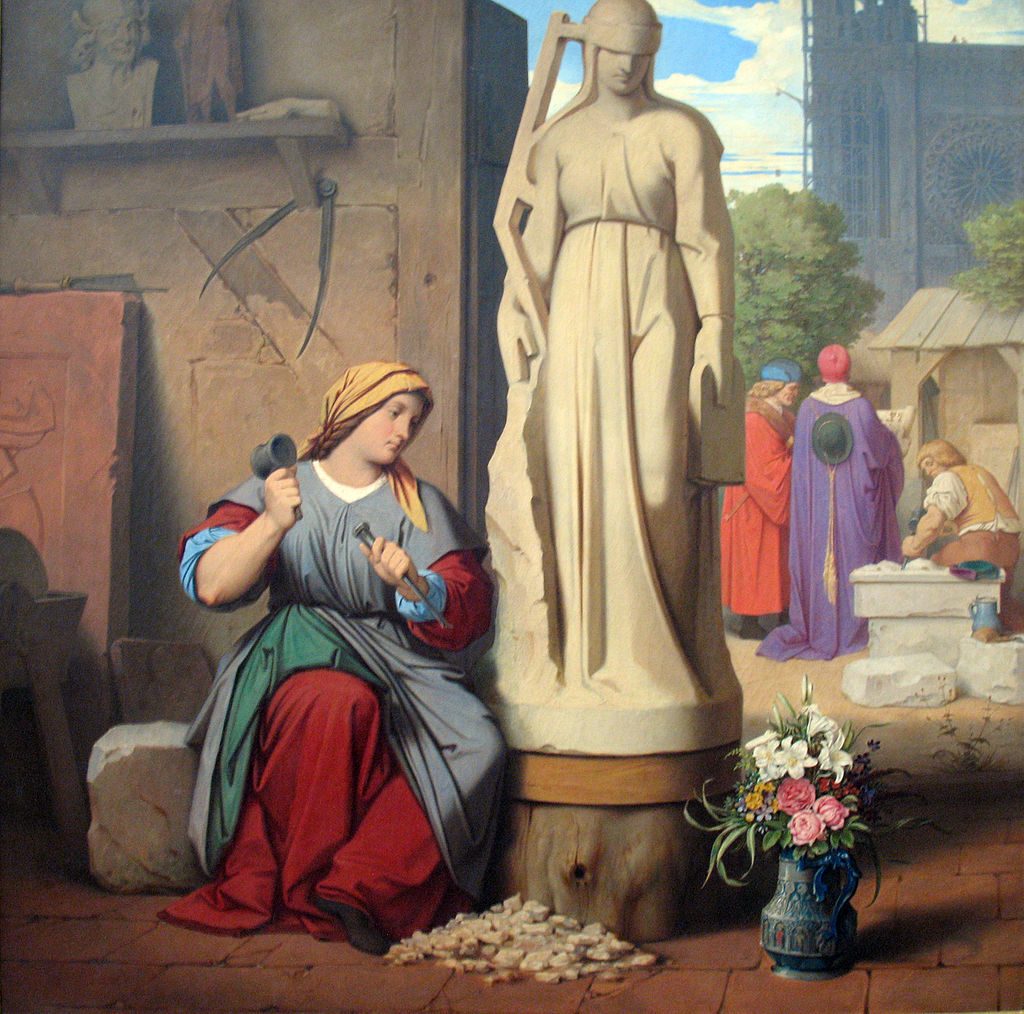 Moritz von Schwind: Sabina of Steinbach, painted 1844. The existence of Sabina von Steinbach may be a myth, but women chipping away at the patriarchy is not.

Last week was a painful and potent reminder that the forces of patriarchy are still strong and that there will always be men and women who embrace the image and role of the subservient woman; to paraphrase the title of Gail Collins’ book, women as “dolls, drudges, helpmates, and [only occasionally] heroines.” But for every moment of rage and despair last week, there was a moment of hope: Dr. Blasey Ford’s personal bravery; Sen. Klobuchar’s quiet but firm questioning; Ana Maria Archila and Maria Gallagher sharing their pain and outrage with Sen. Flake. Our hope comes not just from the sisters of today; it comes from knowing that our sisters from the past helped us to get this far. There’s still a long way to go. We won’t create the sculpture of equality overnight, but we have the chisel; we have the hammer, and we will not quit chipping away.
Lady Frances Berkeley (1634-1690/95)
Although she is most often noted as the wife of three colonial governors over the course of her life (two in Virginia, one in North Carolina), it is Lady Frances’ intelligence and independence that should be noted. Before her first marriage, a provision was made that upon her husband’s death, she would inherit his plantation. Not only did she inherit it when he predeceased her, she ran it herself instead of taking the more common route of turning the management over to a man. Her second husband, Sir William Berkeley, was governor of Virginia and much older than Frances. His was a controversial governorship, and it was during his term as governor that Bacon’s Rebellion occurred. To those of us of a certain age, Bacon’s Rebellions was taught as a rising up of the frontier Virginians against the landed gentry and the unfair taxation of the Crown, and thus, a precursor of the American Revolution. Although all of that is largely true, what was often left unsaid was that the frontier settlers wanted free rein to commit genocide against Natives. Berkeley stood firmly and solidly against retaliatory actions against Natives, as well as denying permission to attack and claim westward land held by Native peoples. In support of her husband’s policies and to quell the rebellion (which resulted in the burning of the colonial capital, Jamestown), Lady Frances travelled to England to lobby at court and returned, successful, with a royal commissioner and 1000 troops. Unsurprisingly, Lady Frances’ political involvement led to critics of Sir William claiming that,

…his much-younger spouse had tormented him with her sexual demands, forcing him to raise money to buy her luxuries to make up for his inadequacies in bed. That sort of theory has been popular throughout history when men try to explain the political activities of strong women. (America’s Women: 400 Years of Dolls, Drudges, Helpmates, and Heroines, p. 31)

When William Berkeley died in 1677, Frances Culpepper Berkeley became the richest woman in at least Virginia and quite possibly all of British-held North America. Despite having the means to live a life of leisure, her interest in politics continued. When she married for the third time, she often lobbied the Virginia House of Burgesses on behalf of the interprovincial interests of her husband, the governor of [what is now] North Carolina.

Sarah Grimké (1792-1873)
Sarah Grimké was one of fourteen children of a wealthy, South Carolinian, slave-owning family. Raised in an era when women of her class were expected to follow rigid standards of “southern womanhood,” she was privately, but differently, educated from her brothers. She was taught French, watercolor painting, harpsichord playing, and embroidery. Her father finally allowed her access to his own library, from which she taught herself geography, history, and math. At the age of four, she witnessed the whipping of a slave; she ran away from home and was found at the wharves, “asking a ship’s captain to take her to a place where such things never happened.” (Collins, p. 174) The twin strains of chafing at the injustice of her own [en]forced inferiority and at the injustice of slavery were to shape her entire future.

In 1819, she traveled to Philadelphia as nursemaid to her gravely ill father, who was seeking medical attention from a renowned doctor. Her father died shortly after their arrival, and Sarah made the decision to live independently in Philadelphia; this was such a flouting of Southern conventions that her family announced that she had moved for her health. In 1827, she returned to Charleston to collect her sister, Angelina, who became her ally in activism. In another break with convention, the Grimké sisters became the first women anti-slavery speakers on the Abolition circuit. In an era where public speaking by women was viewed with suspicion and often animosity, two Southern women from a slaveholding family speaking passionately against slavery was enough of a novelty to overcome the “disadvantage” of their womanhood for the Anti-Slavery Society which hired them; their public reception was often less friendly.

Angelina was generally considered the stronger speaker, but Sarah’s writing on the topic of women’s equality reverberates even today. (Ruth Bader Ginsburg quoted Sarah Grimké for a 1973 oral argument before the Supreme Court in Frontiero v Richardson.) The prevailing view of the the role of women at the time, particularly in the northeastern United States, was best summed up by the views of Catharine Beecher. Beecher was an educator and ardent supporter of women as teachers; however, she felt just as strongly that women should steer clear of the evils of politics as it would diminish, rather than enhance, their existing influence as mothers and teachers. Beecher publicly criticized the sisters for their lecture schedule, and in 1837, Sarah Grimké felt compelled to respond. In a series of letters addressed to the president of the Boston Female Anti-Slavery Society and published in a newspaper in 1838, she did not deny the “cult of domesticity” altogether, but she felt strongly that women did have a role in politics in defense of a moral cause.

She was particularly concerned to attack two of Beecher’s arguments. First was the notion that women were subordinate to men by God’s decree. She argued instead that God had made the sexes equal, but that men had created women’s inferior condition by denying them opportunity and forcing them to do their bidding. Sarah also sought to demolish the concept of “separate spheres” of influence for men and women. She insisted that women had the same rights and duties as men and should be able to participate fully in education, religion, work and politics—including the abolition movement. Sarah made the case for women’s equality with passionate conviction. In 1838 her words were radical indeed, and won the agreement of only a small minority. (Sarah Grimké Argues for Women’s Rights)

Sarah Grimké does not mince any words:

…Man almost always addresses himself to the weakness of woman. By flattery, by an appeal to her passions, he seeks access to her heart; and when he has gained her affections, he uses her as the instrument of his pleasure—the minister of his temporal comfort. He furnishes himself with a housekeeper, whose chief business is in the kitchen, or the nursery. And whilst he goes abroad…his wife is condemned to draw nearly all her instruction from books, if she has time to pursue them; and if not, from her meditations, whilst engaged in those domestic duties, which are necessary for the comfort of her lord and master… (LETTER IV. SOCIAL INTERCOURSE OF THE SEXES. Sarah Grimké Argues for Women’s Rights)

But I ask no favors for my sex. I surrender not our claim to equality.
All I ask of our brethren, is that they will take their feet from off our necks, and permit us to stand upright on that ground which God designed us to occupy. If he has not given us the rights which have, as I conceive, been wrested from us, we shall soon give evidence of our inferiority, and shrink back into that obscurity, which the high souled magnanimity of man has assigned us as our appropriate sphere. (Letter II: Woman Subject Only To God. Letters on the Equality of the Sexes)

After Angelina married and had her first child in 1839, the sisters scaled back their public speaking but not their commitment to progressive ideals. They started a progressive boarding school, and when they discovered one of their brothers had fathered children with one of his slaves, they welcomed the nephews as family and paid for their college education. In 1870, suffrage supporters

…decided that a few brave women would attempt to vote, in the first of what would later become many thousands of such demonstrations. A fierce snowstorm arrived with the election, but forty-two women and their male escorts formed a procession and marched to the polling place amid jeers of the townspeople. At the head of the procession, first of the first pioneers, were Angelina and Sarah Grimké. (Collins, p. 177)

(For those interested in reading a fictional treatment of Sarah Grimké’s life, Sue Monk Kidd’s 2014 historical novel The Invention of Wings looks at Sarah’s life and the life of one of her childhood slaves.)

These are just short profiles of two strong sisters largely forgotten and erased by a patriarchal history. They took chisels to the stone of patriarchy; they created cracks and chips in the facade of male supremacy; and they gave us an outline for our path forward. We may be discouraged, hurt, angry, and even scared, but we have strength, fortitude, and the examples of our sisters before us.