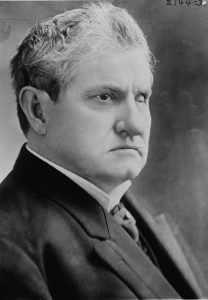 Last week, one of the correct answers in the game version of Primary Sources was Benjamin Tillman. His name was familiar to me as “some late 1800s politician dude,” but beyond that, I remembered very little. Working on the assumption that I was not alone in a vague remembrance, I decided to shine the spotlight on him this week. I’m not going to provide his overall biography; Wikipedia has a very detailed rundown for those who are interested (Benjamin Tillman). Instead, I’m going to provide pictures of his legacy, interspersed with his own words and words of academics.

An “agricultural Moses” who believed the interests of farmers were overlooked in South Carolina, he was instrumental in convincing Thomas Clemson to leave the bequest and land that made a new agricultural school possible. Clemson University was born, and Tillman was one of those (granted through Clemson’s bequest) made a trustee for life. 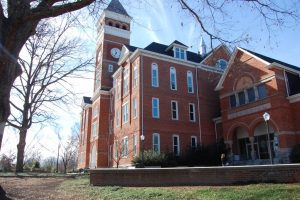 Tillman Hall, Clemson University; Clemson did not integrate until 1963.

When you educate a Negro, you educate a candidate for the penitentiary or spoil a good field hand. Benjamin Tillman, 1886 (South Carolina State University: A Black Land-Grant College in Jim Crow America By William C. Hine)

A wealthy planter and landowner who became governor of South Carolina (1890-1894 and commemorated in the 1940 statue erected on the SC Capitol grounds; see below), based on his white supremacist advocacy for the “farmer” and with the help of Red Shirt terrorist/paramilitary allies and friends.

In the midst of the Confederate flag rally, these young folks are reading the plaque on the Benjamin Tillman statue nearby. pic.twitter.com/gSTsfTlzJv

Tillman’s definition of farmer excluded black men and all women; it evaded questions of class difference, flattening hierarchical relationships of class and power into a white male concensus at the top of an organic social order…”Farmer,” like “white,” was invoked in order to smooth over the conflicts that existed between small tenants and great landowners; it was, in effect, a slogan. (Kantrowitz, Stephen. “Ben Tillman and Hendrix McLane, Agrarian Rebels: White Manhood, “The Farmers,” and the Limits of Southern Populism.” The Journal of Southern History 66, no. 3 (2000): 497-524. doi:10.2307/2587866.)

Democracy, the rule of the people, has won a victory unparalleled in its magnitude and importance…The triumph of democracy and white supremacy over mongrelism and anarchy, of civilization over barbarism has been most complete…
The whites have absolute control of the State government, and we intend at any and all hazards to retain it. The intelligent exercise of the right of suffrage…is as yet beyond the capacity of the vast majority of colored men. We deny, without regard to color, that ‘all men are created equal’; it is not true now, and was not true when Jefferson wrote it. (Tillman Inauguration speech, 1890 Pitchfork Ben Tillman, South Carolinian) 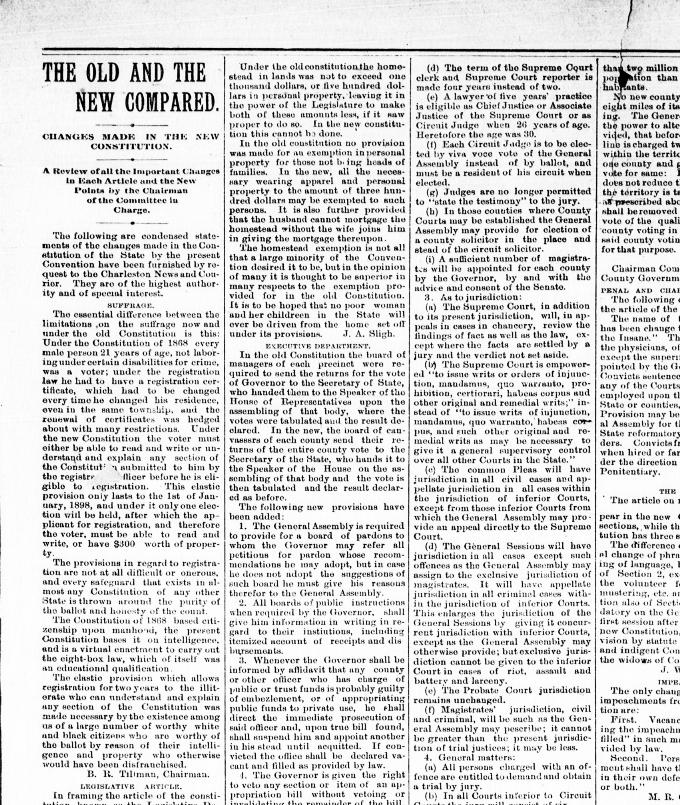 “The Constitution of 1868 based citizenship upon manhood; the present Constitution bases it on intelligence…” B.R. Tillman, Chairman

The U.S. Senator from South Carolina (1895-1918) who proudly, loudly, and often declared the gospel of white supremacy on the Senate floor. He had his own ideas about civility and decorum in the Senate, as he punched the junior senator from SC (and fellow Democrat) on the Senate floor. Both senators were censured for their actions. (As a result of these actions, additional wording was added to Rule XIX of the Senate [“No senator in debate shall, directly or indirectly, by any form of words impute to another senator or to other senators any conduct or motive unworthy or unbecoming a senator.”]; the provision is rarely used, although Sen. McConnell invoked this rule when Sen. Warren attempted to quote from letters by Coretta King and Sen. Ted Kennedy during the confirmation process for Jeff Sessions as Attorney General.) 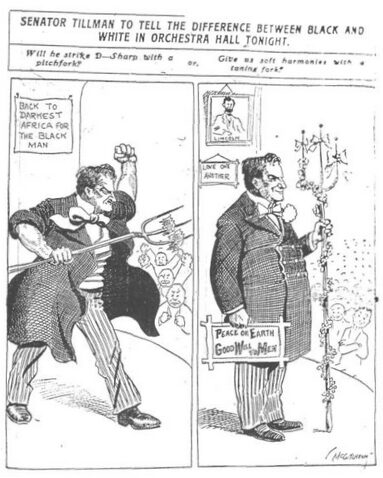 I want to call the Senator’s [Senator John C. Spooner, of Wisconsin] attention to one fact. He said that the Republican party gave the negroes the ballot in order to protect themselves against the indignities and wrongs that were attempted to be heaped upon them by the enactment of the black code. I say it was because the Republicans of that day, led by Thad Stevens, wanted to put white necks under black heels and to get revenge. There is a difference of opinion. You have your opinion about it, and I have mine, and we can never agree.
I want to ask the Senator this proposition in arithmetic: In my State there were 135,000 negro voters, or negroes of voting age, and some 90,000 or 95,000 white voters. General Canby set up a carpetbag government there and turned our State over to this majority. Now, I want to ask you, with a free vote and a fair count, how are you going to beat 135,000 by 95,000? How are you going to do it? You had set us an impossible task. You had handcuffed us and thrown away the key, and you propped your carpetbag negro government with bayonets. Whenever it was necessary to sustain the government you held it up by the Army.
Mr. President, I have not the facts and figures here, but I want the country to get the full view of the Southern side of this question and the justification for anything we did. We were sorry we had the necessity forced upon us, but we could not help it, and as white men we are not sorry for it, and we do not propose to apologize for anything we have done in connection with it. We took the government away from them in 1876. We did take it. If no other Senator has come here previous to this time who would acknowledge it, more is the pity. We have had no fraud in our elections in South Carolina since 1884. There has been no organized Republican party in the State. (March 23, 1900, speech before the U.S. Senate)

I do not say it in a boastful spirit, although I am proud to say it, that the people of South Carolina are the purest-blooded Americans in America. They are the descendants of the men who fought with Marion, with Sumter, with Pickens, and our other heroes in the Revolution. We have had no admixture of outsiders, except a small trickling in from the North and from other Southern States…
It was then that ‘we shot them;’ it was then that ‘we killed them;’ it was then that ‘we stuffed ballot boxes.’ After the troops came and told us, ‘You must stop this rioting,’ we had decided to take the government away from men so debased as were the negroes—I will not say baboons; I never have called them baboons; I believe they are men, but some of them are so near akin to the monkey that scientists are yet looking for the missing link. We saw the evil of giving the ballot to creatures of this kind, and saying that one vote shall count regardless of the man behind the vote and whether that vote would kill mine. So we thought we would let you see that it took something else besides having the shape of a man to make a man…
But I here declare that if the white men of South Carolina had been content to obey the laws which had been forced down our throats at the point of the bayonet and submit to the reconstruction acts which had thrust the ballot into the hands of ignorant and debased negroes, slaves five years before, and only two or three generations removed from the barbarians of Africa, the state of South Carolina to-day would be a howling wilderness, a second Santo Domingo. It took the State fifteen years to recover and begin to move forward again along the paths of development and progress; and in consequence of the white men interpreting the word ‘liberty’ to mean the liberty of white people and not the license of black ones, the State is to-day in the very vanguard of southern progress, and can point to the result as the absolute justification for every act which we performed in ‘76, however lawless our acts may be in the eyes of the Senator from Wisconsin…
Mr. President, the Senator from Wisconsin speaks of ‘lynching bees.’ As far as lynching for rape is concerned, the word is a misnomer. When stern and sad-faced white men put to death a creature in human form who has deflowered a white woman, there is nothing of the ‘bee’ about it. There is more of the feeling of participating as mourner at a funeral. They have avenged the greatest wrong, the blackest crime in all the category of crimes, and they have done it, not so much as an act of retribution in behalf of the victim as a duty and as a warning as to what any man may expect who shall repeat the offense. They are looking to the protection of their own loved ones. (Senator Ben Tillman from an exchange with Senator John Spooner in the United States Senate (1907) )

I’ll be the first to admit I’ve cherry-picked these quotes. Sen. Tillman was also a sponsor of a campaign finance reform bill that carries his name, the Tillman Act of 1907; a bill that is still in effect today. Yet even with that laudable bill, Tillman’s reasoning was related to his sectional and race hatred; he felt northern industrialists had liberal ideas on race, which he loathed. But for all his achievements, commendable or otherwise, he must be remembered, first and foremost, as a virulent, sometimes-violent, and unapologetic white supremacist.