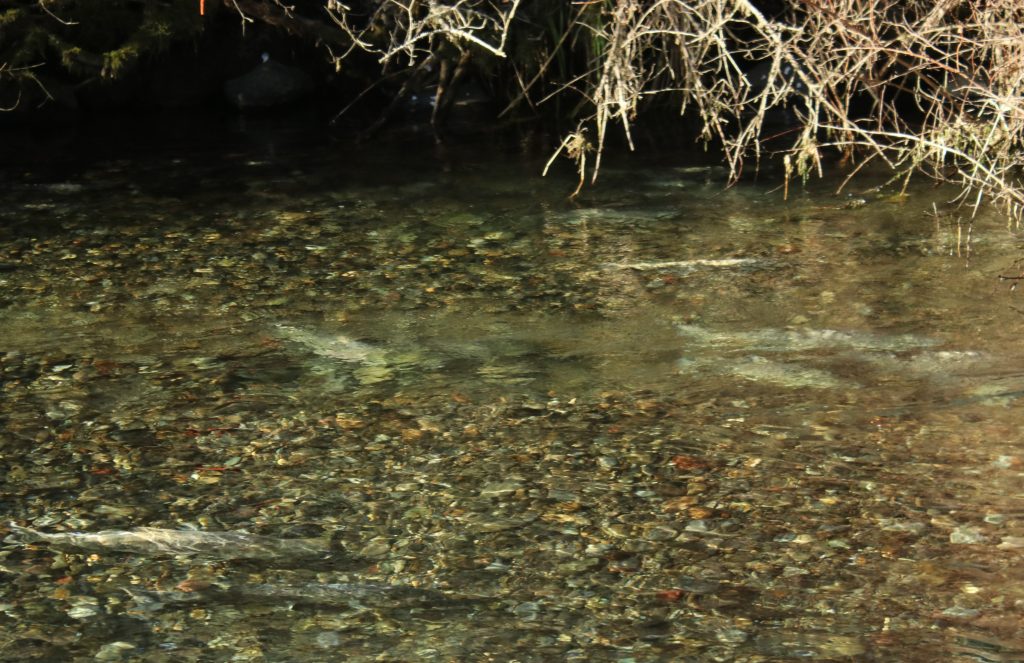 Spawning Salmon in tributary creek to the Nooksack

In Part 1 of this series I described the Nooksack River from its headwaters in the North Cascade Mountains through its course to the Salish Sea. I made the case that this river, along with others like it, were critically important to sustaining our icons of the Salish Sea  – salmon and orcas. Sustaining these icons is dependent in part on the health of these rivers that grow the fish which in turn feed our resident orca.  That is, healthy rivers are a necessary but not a sufficient condition for saving these critters. In this part I relate the history of the river, what has happened to it and why it is important today that it is restored to health and maintained.

On casual viewing, most of this river appears robust and healthy as seen in Part 1. Although much of river is in pretty good shape, closer examination shows that it is not totally pristine, especially as it pertains to our aquatic friends.  In general, the river is relatively healthy in its upper reaches and deteriorates progressively as it flows toward the sea which corresponds with the increased density of residential and agricultural occupation.  The story of the Nooksack River has been written numerous times of other rivers all across the continent from east to west. The Nooksack was one of the last to experience change as the area was not settled until the mid to latter part of the 19th C.

The Nooksack and Lummi Indians have flourished in this area along the river for thousands of years as it provided them with an abundance of everything they wanted and needed. The river teemed with salmon much of the year as each of the five species had spawning runs at different times of the year. They had nutritious roots of all kinds, including their namesake the “Nooksack” – Bracken Fern roots. In addition to salmon and roots, they had access to all the meat they could process including deer, elk, bear, beaver, mountain goats, cougar, birds, shellfish and more. They had dense forests of Douglas Fir and Western Red Cedar that provided lumber for their longhouses and canoes. For thousands of years they had lived as part of this natural system. They wanted for little.

Then in the latter 1850s and thereafter, the white settlers showed up and staked out homesteads along their river and in its watershed. Although they seemed to have gotten along well with local Indians and many became lifelong friends, the new settlers brought their ways that began changing the character of the land and therefore the river. The new homesteaders saw these natural wonders as something to be exploited and they were good at it.

The first homesteading took place in the flat prairie land surrounding the lower 30 miles downstream from where the south fork joined the main river. These prairies were covered with timber and large expanses of ferns, hence one of the early towns was named “Ferndale.”

The first thing the new settlers did was clear the forest and fern prairies for farmland. Since the river was their main mode of transportation, they first cleared and built along its banks. Because they wanted boats larger than dugout canoes to bring equipment and supplies up the river, they cleared out the natural log jams and beaver dams so they could get a steam boat upriver. This river excavation destroyed spawning and rearing habitat of the salmon.

The sketch at the right is of the Hawley family being ferried up the Nooksack by Indian Jim, a  Nooksack Indian Chief, to stakeout their Homestead (1872). The sketch is by RE Hawley from his book “Skqee Mus — or Pioneer Days on the Nooksack,” 1945. RE Hawley is the child depicted in the canoe. 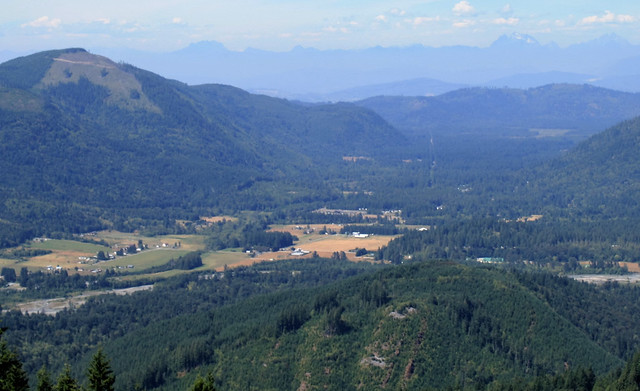 Logged hillsides above the Nooksack valley with cleared forest along the river for farmland as they appear today. Logging and farming continue. Rain runoff of which we have plenty, eroded the hillsides and denuded land, sending mud and silt that interferes with salmon spawning beds in the river bottom. The river is seen running through the valley right to left.

The logs were skidded to saw mills which were situated on and powered by the river. The mills further stirred up the stream also destroying spawning grounds. This logging and farming denuded much of the river’s watershed leaving bare land without natural flora to slow the rain and flooding runoff. And it continues yet today although it is better regulated.

This first settled part of the river regularly flooded the crops and is now mostly diked and dredged which also destroyed the salmon habitat. The fish must swim at least 30 to 50 miles up each of the forks and feeder creeks to find adequate spawning beds. The growth continues with more farms, vacation housing developments, and logged hillsides but with increasing environmental regulation along with governmental agencies and NGOs working to preserve the remaining waters.

A local district biologist for the Washington State Department of Fish and Wildlife described the river as unstable.

Rainstorms cause sudden, dramatic increases in river flows, followed by sudden drops. The flood stage destroys redds – the salmon egg nests – washing them away in the current or suffocating them with mud deposits. The drops destroy other redds the salmon laid when the water was higher, leaving them high and dry.

“Our biggest problem is egg-to-fry survival,” Barkdull said. “There’s basically no habitat left in the main stem … The Nooksack has been diked, ditched, straightened. Any evil you can commit on a river has been done to the Nooksack.”

That pretty well sums up the state of the lower reaches of the Nooksack River and as noted above, progressively less so as one moves upstream. As a whole the river is still quite viable. But there are big problems the river continues to lose native of salmon.

Wild Salmon (except Sockeye) in most of the streams feeding the Salish Sea are listed as threatened according the Endangered Species Act.  Their numbers have plummeted in recent years and are nearly gone in many streams. Although all five species still find their way home and spawn in the Nooksack River or its tributaries, the numbers are small as is the case for most all streams leading into the Salish Sea. 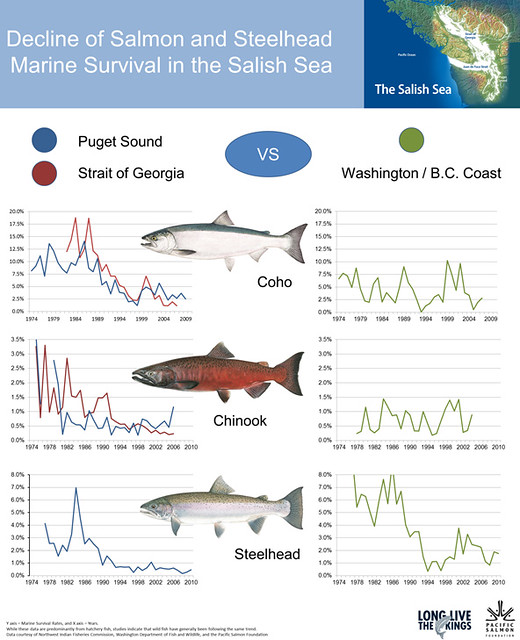 Note that the greatest losses are to the fish of the Salish Sea with less loss out on the coastal rivers.

Most salmon spend much of their first year or so in freshwater streams and this first year is critical to their ultimate survival. To the extent that their stream is healthy and with adequate food, they can grow larger and faster, traits that decrease their chances of being eaten by larger prey. Although more are lost while at sea after leaving the river, the early rearing conditions are also vital to their ultimate survival and the rate is diminishing significantly. Over the past 50 years, Salish Sea salmon and steelhead survival rates (returning to spawn) have shrunk from 3 per 100 to just 1 per 100. With that rate of loss these fish are clearly not sustainable for long.

Considerable study now confirms that stormwater runoff contains thousands of toxic chemicals including heavy metals and hydrocarbons all of which are highly toxic to fish. Exposed to concentrations of these chemicals salmon develop what is now called the “ Urban Runoff Mortality Syndrome.”

The river, the salmon and the ecosystem

The focus of the river preservation would appear to be on “save the salmon,” but the task is  more accurately: “Save the river and its ecosystem” and then you will save the salmon. These fish do not exist in isolation as they are part of a highly interdependent network of both flora and fauna, all parts of which must be preserved. While the stream’s biological health fosters the salmon, the salmon’s bodies also nourish other river denizens such as numerous macroinvertebrates. 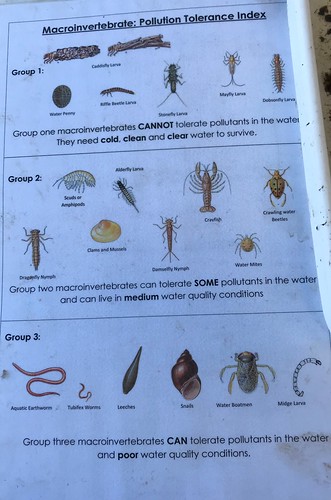 The number and types of macroinvertebrates present is a clear indicator of stream health.

These invertebrates are important food sources for young salmon fry as they mature after hatching in spawning streams.  Other stream critters such as the American Dipper eat dragonflies, various larva, worms, small fish, (salmon fry) and fish eggs (salmon roe).

Salmon also nourish other critters and are referred to a “Keystone Species” in both aquatic and terrestrial environments in that their presence contributes to the survival and reproduction of some 40 other vertebrate species. These include the salmon themselves, trout, eagles, ravens, crows, Bear, wolves, coyotes, river otter and other mammals who feast on their eggs, carcasses, or their young.

Less spectacular but very important to the riparian environment is that the decomposing salmon carcasses also provide nutrients for algae in the streams, for trees and other plants along the stream. An interesting correlation has been found between size of a given year’s salmon run and the nitrogen levels found in tree growth rings along a river’s riparian zone. This occurs when the above animals drag salmon from the river to the adjacent woods where they devour the most nutritious portions of the fish, eating mostly their bellies and roe. They then leave the rest of the carcass to decompose into the soil.

Based on research on salmon streams in Alaska scientists have found trace nutrients from salmon bodies in mosses, herbs, shrubs, insects, song birds, bears and wolves.  Salmon feed the whole gamut of  wildlife that lives in or near their streams.

Salmon are important for sustaining their ecosystem which needs to be preserved or we will be left with barren, sterile, stinky and muddy water running to the sea which in turn will be barren and lifeless.

The effects of the  river’s pollution does not end when it reaches the salt water. It flows into the intertidal shores and continues its pollution.  The water’s high nitrogen and phosphorous content from manure and fertilizer runoff fosters rapid phytoplankton growth. Often, but not always these “blooms” of algae turn the water red and are referred to as red tides. Since they do not always turn the water red, they are more recently called Harmful Algal Blooms, (HABs). Shellfish consume and even thrive on these algae without harm but as certain algae accumulate, they can build to levels that are toxic and even fatal to humans and marine mammals. When the levels become toxic, all shellfish harvesting (recreational and commercial) is closed down. Currently the local beaches here are closed to Mussel harvest due to toxic levels of Paralytic Shellfish Poison. 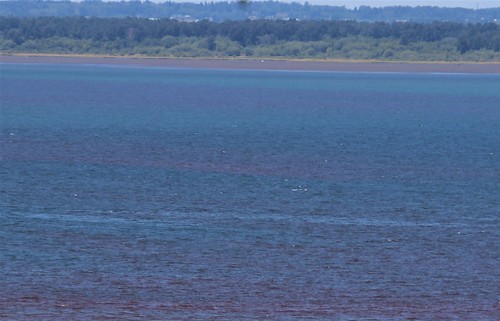 Streaks of a Red tide or HAB in Bellingham Bay in August- nutrients plus warmth promotes algae blooms.

The pollution harms the river water and then the tidewaters (shellfish) and on into the Salish Sea affecting all marine life there including  fish and whales.

Most dependent on the salmon for their lives are the resident orca that have lived in the Salish Sea for eons. Our three local resident pods, designated: J, K, & L, rely solely on a salmon diet or they starve. Like their food source, salmon, the Salish Sea resident orca are in serious decline.

So What led to this threatening state of affairs?

In a nutshell the salmon habitat has been eroded, they have been historically overfished, polluted and poisoned. The issue is a problem with the entire ecosystem.  Following is an enumeration of some of specific causes of decline of this river and its salmon. Clearly these are not unique to this river.