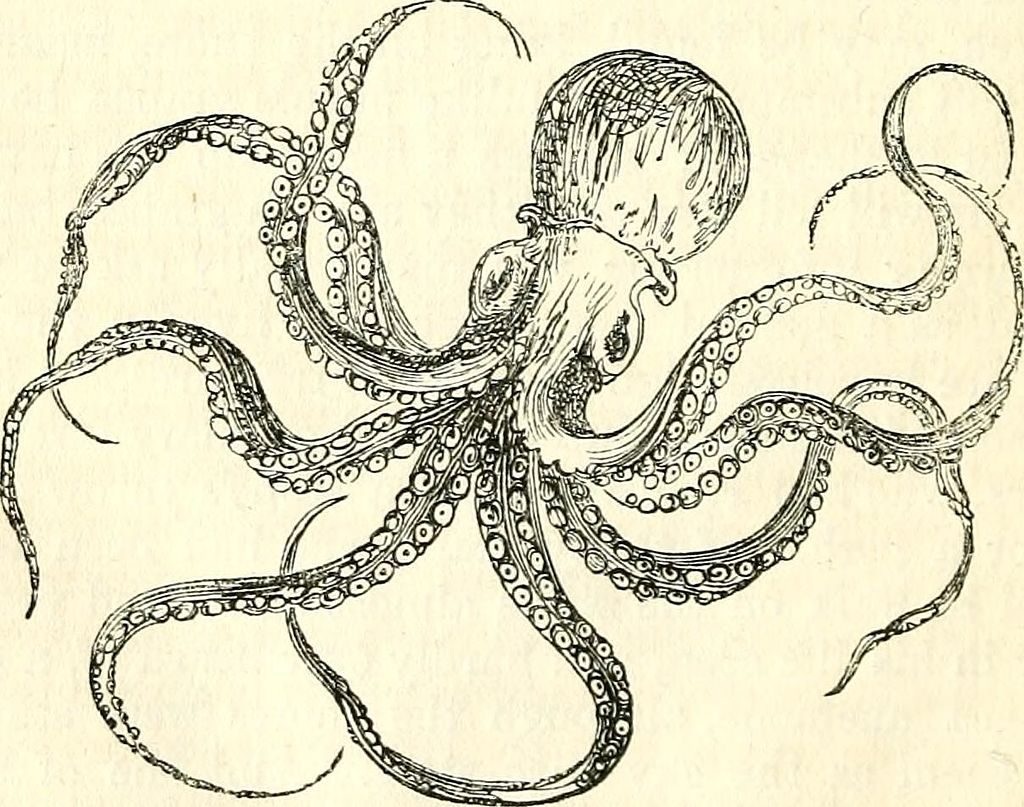 From “The Common Objects of the Sea Shore, including hints for an aquarium,” 1860.  Nothing to do with the topic, but I needed an illustration with tentacles.

Several months ago, I mentioned in a comment that the story about the addition of the words, “under God” to the pledge of allegiance was more nuanced and more detailed than most of us know; it’s a story that starts well before the Eisenhower years. I’ve been wanting to do a post about the topic ever since, but it’s a difficult topic to write about, because it’s so far-ranging and over so many decades. In his book, One Nation Under God: How Corporate America Invented Christian America, author Kevin Kruse spends the first 64 pages laying out the groundwork before even getting to the 1950s, so I knew one post would be either too superficial or insufficient. I needed to find the right “hook”; today this tweet gave me the impetus to start:

When Individual 1 tweets about religion in America, it’s obvious that it doesn’t come from a deep, faith-based place, and that’s true of so much of the public religiosity in our country…and has been for decades. Today I’m writing about one of the groups that masked their politics with religion and helped bring about the rise of the “Religious” Right and the myth of the Christian nation.

Spiritual Mobilization
In 1935, a Congregational minister, James W. Fifield Jr, Carleton College president Donald J. Cowling, and Harvard professor William Hocking founded the organization Spiritual Mobilization. Although these individuals were theologically-liberal (Fifield had no time for those who believed Scripture should be read literally), they were politically-conservative and opposed to the New Deal.

The organization’s founding goal was to ‘arouse the ministers of all denominations in America to check the trends toward pagan stateism, which would destroy our basic freedom and spiritual ideals.’ Soon Fifield took sole control, running its operations from his offices in Los Angeles. The organization’s credo reflected the common politics of the minister and the millionaires in his congregation. It held that men were creatures of God imbued with ‘inalienable rights and responsibilities’ specifically enumerated as ‘the liberty and dignity of the individual, in which freedom of choice, of enterprise and property is inherent.’ Churches, it asserted, had a solemn duty to defend those rights against the encroachments of the state. One Nation Under God: How Corporate America Invented Christian America, p. 12

Although the organization identified the New Deal as the enemy to be fought, the ideals took root in the 1920s in reaction against the Social Gospel movement. The Social Gospel held that Christians were called not just to seek personal salvation, but to work towards the public good. These ideals were often espoused by prominent individuals like then-pacifist and anti-capitalist, theologian Reinhold Niebuhr and New York governor Franklin Roosevelt (in a speech criticizing a Republican plan to privatize public utilities, Roosevelt invoked religious language and said, ” TONIGHT I am going to talk about a very wet subject, the wet subject of water power. While it may not be quite as soul-stirring a subject as the other wet one (prohibition), in some ways it goes just as deep to the roots of our democracy. This is a history and a sermon on the subject of water power, and I preach from the Old Testament. The text is “Thou shalt not steal.” Syracuse, NY speech; October 23, 1928). These progressive ideals were viewed as a form of collectivism (socialism) and a threat to the American way of life which was free enterprise. Throughout the 1930s, industry had been blamed for the Great Depression; as the New Deal progressed, groups like Spiritual Mobilization formed to declare that the real enemy was autocracy through bureaucracy, and free enterprise as practiced by industrialists would save the country. Spiritual Mobilization leaders, unlike the titans of industry, could do this without being accused of selfish self-interest.

The Social Mobilization attacks against the New Deal took the tack that it created a “false idol;” that the federal government was usurping the place of Christianity in the minds of people and encouraged people to engage in the covetous behavior of desiring what the wealthy had and attempting to steal from them. But even more importantly, Social Mobilization,

…argued that the central tenet of Christianity remained the salvation of the individual. If any political and economic system fit with the religious teachings of Christ, it would have to be rooted in a similarly individualistic ethos. Nothing better exemplified such values, they insisted, than the capitalist system of free enterprise. One Nation Under God: How Corporate America Invented Christian America, p. 7

In the early years, the work of Spiritual Mobilization was limited largely to distributing pamphlets, which most often featured Fifield’s political speeches (often given from the pulpit of his church, First Congregational Church of Los Angeles, which he had built into a thriving megachurch and which had officially taken over Spiritual Mobilization as a “ministry” in 1938). The themes of his speeches sound familiar even today: that the New Deal diminished initiative, thrift, and industriousness; that the New Deal was a form of totalitarianism; that the nation needed a return to traditional and Biblical values. These tracts were mailed to ministers across the country; according to Kruse, one tract in 1938 was mailed to 70,000 ministers across the country. (Kruse, p. 13) Additionally, the tracts were garnering attention from conservative industrialists and politicians, who had been making similar arguments but gaining less attention and with lesser reach.

U.S. involvement in World War II did not stop Spiritual Mobilization, although it altered its focus a bit. In 1940, Spiritual Mobilization started a series of newspaper advertisements, including one that asked Christians to sign its pledge that, “‘rising tides of paganism and apostasy’ around the globe were a threat to freedom.” (Kruse, p. 14) Two million Americans signed that pledge; by 1944, another pledge was offered, but no numbers are available for how many signed it. The new pledge, written as a direct challenge to Roosevelt’s Four Freedoms, read,

Recognizing the anti-Christian and anti-American trends toward pagan stateism in America, I covenant to oppose them in all my areas of influence. I will use every opportunity to champion basic freedoms [of the] free pulpit, free speech, free enterprise, free press, and free assembly. One Nation Under God: How Corporate America Invented Christian America, p. 14

As Spiritual Mobilization expanded its efforts at national outreach, its budget was also stretched, and corporate sponsors were ready to jump aboard to help. Whether through personal checks, corporate donations, or networking, donations were sought and received. Donators included Harvey Firestone (Firestone Tire and Rubber), H.W. Prentis Jr. (Armstrong Cork and originator of the self-government theory known as the Prentis Cycle, and most influential of all, J. Howard Pew Jr. (Sun Oil). Pew was a noted conservative industrialist who had been a leader in corporate efforts to fight against the New Deal. He was ready to stand behind other leaders in the fight (in part because of the “character assassination” he felt he had suffered), and while he did not agree with Fifield theologically (he was more conservative than Fifield), he was willing to overlook that since they were in perfect synchrony politically. Pew, however, felt that Fifield and Spiritual Mobilization had no action agenda. Fifield had long engaged in a program of persuasion, but Pew wanted to see this grow into a campaign of participation, created by convincing pastors that

…they too had something to fear from the growth of government. “The religious leaders must be helped to discover that their callings are threatened,” Haake [ed. a Pew recruit to the organization] argued, by realizing that the “collectivism” of the New Deal, “with the glorification of the state, is really a denial of God.” One Nation Under God: How Corporate America Invented Christian America, pp. 17-18

What would this campaign of activism look like? What would be its goals and strategies? What, if any, impact would it have on American society? Those will be the topics for next week’s post.