My brother who belongs to a time share condo-resort group treated us to a week at Deer Harbor Resort on Orcas Island in mid January. As some of you might know, this is not far from our home in Bellingham, less than 20 miles as the crow flies. However, after an hour’s drive along the coast and another hour’s ferry ride through scenic islands, we could have been a thousand miles away.

And we really lucked out on the weather for mid January – mostly sunny with just a bit of rain at night.

The San Juan Islands are an archipelago that lies between the north western coast of WA state and Vancouver Island within the Salish Sea. On the map below Orcas Island is the horseshoe shaped one in the upper center of the map. You can see part of Vancouver Island with Victoria in the lower left side. Bellingham and Bellingham Bay where we live are on the upper right. 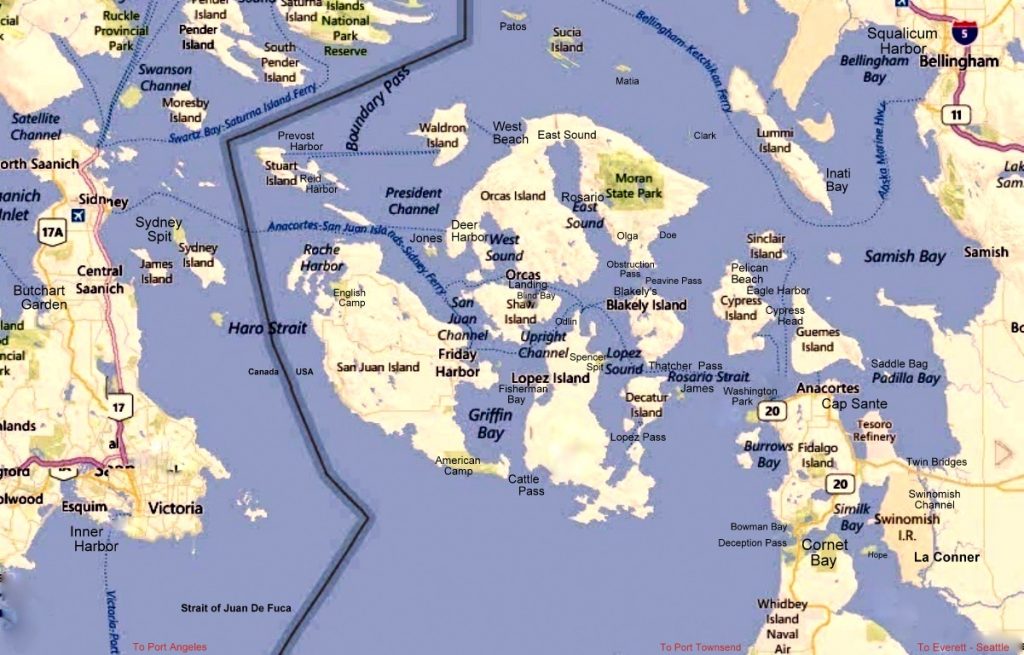 Deer Harbor where we stayed is the smallish inlet on the lower left side of the island, just west of West Sound

Below is a view of the harbor from our deck. The view would have been better if weren’t for the darn palm trees. Although they are now  transplants, 54 million years ago, palms were native here. 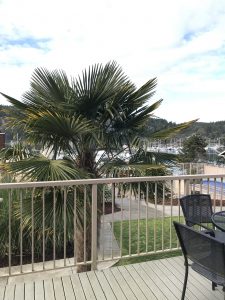 January being the off season, we virtually had the island to ourselves except for a few locals who were all friendly. That was good for us as we have a long history on this island, having starting going there with the family (4 kids) each summer through the 1970s and into the 1990s. Then in the mid 1990 and 2000s, we came by boat and moored at various marinas in the islands, including right here at Deer Harbor.

Ron took a hike up the Turtle Back Mountain, largest hill on the west side of the island at 1,110 feet,  to take a few photos of the surrounding territory. The photo at the top is from this vantage point looking Southwest.

Here is  a video of the wide panorama to be seen from Turtleback.

Looking, across Orcas to the east is Crow Valley farms and Mt. Constitution in the distance. Shortly I’ll show  some views from atop that big hill. Fortunately we could drive up to it.

Now for some trees. There are several species of trees on Turtleback that I particularly like:

Then there are our favorites: The Madrona (aka Madrone; Arbutus) are from back at the Deer Harbor shoreline

To get a good look at what was on the other side of the island we drove to the east side and up Mt. Constitution. This is the highest point in the San Juan Islands group reaching 2,409 feet and is part of Moran State Park. The views here are even more breathtaking than those from Turtleback. The photo below shows the water of Bellingham Bay in the foreground with Bellingham, the city on its shores. Behind are the cascade mountains with Mt. Baker overseeing it all.

To position us at home relative to up here, we are able see this tower on Mt. Constitution from our living room. The stone tower was constructed in 1936 by the Civilian Conservation Corps.

The following video starts from Canadian Lowlands and moves down the cascades toward Puget Sound.

From this vantage point we can look to the north into the lower mainland of British Columbia and see the Cascade Range coming down across the border.  Looking to the East we are perched above Rosario Strait and Lummi Island. Looking further across is Bellingham Bay and Bellingham with Mt. Baker looming above it all. Then moving south we look down to Puget Sound again. The sound you hear in the video is the wind howling and it was frigid, (for us anyway).

Following are some other scenes from the island. Some are from this trip and a few from previous trips to provide a bit more local color.

After a beautiful and relaxing week, reality beckoned to us.