The Weekly Democratic Party Address was delivered by Senator Brian Schatz of Hawaii and discussed the heinous budget introduced by the Republicans’ president.

So this budget makes very clear the difference between Democrats and Republicans. Republicans are all about tax cuts and paying for it by cutting health care. And Democrats want to expand health care coverage, invest in students, and protect the air we breathe and the water that we drink. 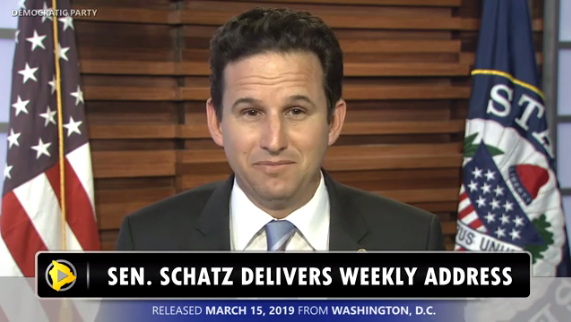 “Now, I know this is the Democratic weekly address, and we’re supposed to say the things that are good for Democrats and bad for Republicans. But it’s true: Republicans really are coming after your Medicare and your Medicaid. This isn’t a campaign slogan or an overstatement. It’s right there in the budget that the president released this week. It’s got $1.5 trillion in cuts to Medicaid, and $845 billion in cuts to Medicare.

“And what’s interesting is that these cuts add up to about $2.3 trillion, which is literally the same amount that the tax cuts that Republicans just gave to the wealthiest Americans last year. They lost $2.3 trillion in revenue because they gave a 14 percent tax cut to corporations and $17 billion worth of tax cuts to the wealthiest Americans. And so now they’re trying to pay for it by going after your health care.

“The president’s budget also has other cuts that are totally unacceptable: $25 billion from Social Security, $207 billion from federal student loan programs, $220 billion from programs that feed the poor, and one-third of the entire budget of the Environmental Protection Agency.

“So this budget makes very clear the difference between Democrats and Republicans. Republicans are all about tax cuts and paying for it by cutting health care. And Democrats want to expand health care coverage, invest in students, and protect the air we breathe and the water that we drink.

“It’s that simple. Thanks for listening.”

Are you ready for St. Patrick’s Day weekend coming up? We will shortly be welcoming the President of the United States and the Taoiseach of Ireland, the Prime Minister, to the Capitol for a bipartisan, bicameral luncheon to honor St. Patrick and the beauty of immigration to our country, of people coming from Ireland.

So beautiful. I said, ‘Is that a tradition in your father’s family?’ And they said, ‘No, it’s a toast we saw in the Shannon airport on a poster.’

Speaker Pelosi. So much for that.

In any event, I tell you this, which I think is very funny, and I will tell them – see if you think it’s funny: when they had the first dinner, Ronald Reagan, President Ronald Reagan, Speaker Tip O’Neill, coming together, putting differences aside on this Irish luncheon. The Taoiseach didn’t come the first year. It was not until the next year the Taoiseach came. But the luncheon had the President, the Speaker, sixteen Members of Congress – twelve of them from Massachusetts.

Anyway, here we are. This is a very special day for us beyond the wonder of St. Patrick.

In the House, we voted to protect the truth for the American people. Overwhelmingly, I think over 400 votes – four voted present – everyone else voted for the Mueller resolution, which would ensure that the American people get the truth. We will send that bill over to the Senate.

As we leave for this district work period, Members are going home again to talk about what we promised For the People: lower health care costs by lowering the cost of prescription drugs, bigger paychecks by building the infrastructure of America in a green way and cleaner government. And we are so proud to have passed H.R. 1 last Friday, to that end.

In regard to the other two categories, hearings and even some legislation has been marked up in terms of moving us closer to passing an infrastructure bill. We’ll work – that’s something, in both of those areas, lowering prescription drugs prices and building infrastructure – two areas that the President has said he wants to work on together. So, we’re moving in that direction in a bipartisan way.

At the same time, we are very dismayed by the President’s budget. The budget is supposed to be a statement of our national values. What’s important to us as a nation should be reflected in how we allocate our resources. I am fond of saying around here: show me your values, show me your budget.

The budget that the President put forth is appalling. It cuts $2 trillion out of Medicare and Medicaid. Well, the list goes on and on about the things that it does: It steals $2 trillion from Medicaid and Medicare, hurting farmers and hungry families by slashing $220 billion from the SNAP food assistance and cutting the Agriculture Department budget by almost 15 percent. It pushes affordable college further from reach by cutting $207 billion from student loan initiatives, and endangering life-saving medical research by cutting $5 billion dollars from the National Institutes of Health.

How could it be, if there is scientific opportunity? It’s almost a biblical way, power to save lives, the power to cure. If we have scientific opportunity, I believe we have the moral responsibility to fund it. And that is bipartisan in the Congress – in the House and in the Senate. So, we will fight these cuts to the National Institutes of Health, including cuts at the National Cancer Institute.

And continue his demands for billions of wasteful dollars for his ineffective wall.

In addition to what I mentioned about For the People agenda, we were pleased this past week to have introduced H.R. 5 – Mr. Cicilline’s bill for LGBTQ community to have full access – to be protected fully by the Civil Rights Act, and H.R. 6, the legislation to help our Dreamers, Temporary Protected Status folks and DED.

And also the, as I said, the gun legislation of the week before. So, when I talk to our outside friends, grassroots activists and the rest, they are very thrilled about H.R. 8 – the bill to end gun violence, to provide gun violence prevention, and also H.R. 1112, that closes the [Charleston] loophole.

So, with our original agenda, For the People, the additional, protecting the Dreamers, et cetera, protecting the LGBTQ, and also, again, ending gun violence in our country, we have quite remarkable legislative achievements as we go forward. By the time we will have been here 100 days, it’s shortly after we come back, we will have even more results in this regard.

And one more, and that’s net neutrality that we talked about last week, which will come to the Floor shortly after our return.

So we have a full agenda, we are making progress, and that’s what we said we would do – with transparency, with as much bipartisanship as possible, and in a unifying way for our country.

This week, more bills were introduced that fulfilled the promises of members running for Congress in 2018. The bills will not be taken up by the Senate but are there for the American people to see what a Democratic Congress, a Democratic Senate and a Democratic president can do for them them.

Washington, D.C. – Speaker Nancy Pelosi joined Congresswoman Lucille Roybal-Allard and House Democrats for a press event to introduce H.R. 6, The Dream and Promise Act, to protect Dreamers and TPS and DED recipients. The bill allows Dreamers and individuals with TPS and DED status to contribute fully to the country they love and know to be their home by providing a pathway to citizenship.

Remarks at the link.
~

Washington, D.C. – Speaker Nancy Pelosi joined Democratic leaders of the House and Senate for a press event introducing H.R. 5, the Equality Act, which amends the Civil Rights Act of 1964 to explicitly prohibit discrimination on the basis of sexual orientation and gender identity in education, employment, housing, credit, federal jury service, public accommodations and the use of federal funds.

Remarks at the link.