“Health care is one of the top kitchen table issues in Nevada. I cannot even begin to count the number of Nevadans who have shared how they would be affected by the courts striking down protections in our healthcare system.” 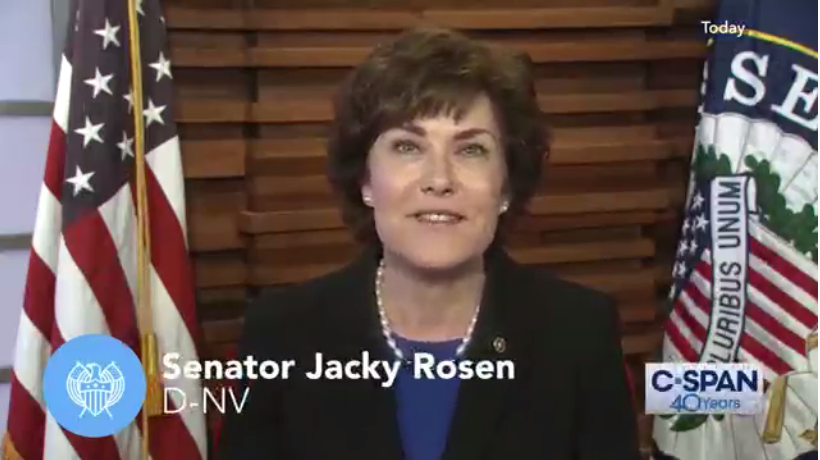 No transcript was provided but there is captioned text accompanying the CSPAN video here: Weekly Democratic Address.

We share sadness today on the passing of Robert Pear. So surprising that all this happened so quickly. He was a titan of American journalism. I had such great respect. He tenaciously pushed the truth and the public good. We’ll all miss him so much. But again, just the shock of it all. Just, life is fragile. We have to appreciate it every day.

I thank you for accommodating earlier coming together this morning. Today, I have the privilege of going to Arlington National Cemetery for the interment of our former colleague, Chairman Ron Dellums. Ron Dellums came to the Congress and people thought he was a rebel, and what would he – how would he be? And then he came, he worked in a bipartisan way.

From a historic standpoint – you might like this story – the leadership was not crazy about the idea of these two progressives going to the Committee, so they told them they didn’t really have that much room, so they’d have to share one chair.

Imagine – imagine how it was. And the irony of it all is that Ron Dellums would later become the Chair of the Armed Services Committee and respected highly by the Republicans on the Committee as well.

So, today he will be – he died a while ago, but the interment is now at Arlington National Cemetery. So, thank you for accommodating the change.

Well, today – in keeping with what we said in the campaign – For The People, lower health care cost, we proudly are passing the Protecting Americans with Pre-existing Conditions Act. It is Annie Kuster’s legislation. She’s been a wonderful leader on this, and we thank her for her leadership.

It’s so funny. During the campaign, the Republicans kept saying, ‘Oh, we don’t want to do away with the pre-existing conditions benefit’ – but they have. And in any case, it is, again, the Administration’s reckless sabotage of the Affordable Care Act.

Yesterday, we passed bipartisan legislation to reduce the price of prescription drugs by making it easier for generics to come to the market.

This week, we’ll build – next week. This is this week – it’s a very exciting day that we’ll be passing this legislation. We invite it to be very bipartisan, send it to the Senate and hope that the President of the United States, who says he supports the benefit of pre-existing conditions, to sign into law as soon as possible.

Next week, we’ll build upon this action by bringing to the Floor the Strengthening Health Care and Lowering Prescription Drug Costs Act, a package of seven bills to further protect families’ health care and lower their health care costs.

Now, in the time that we have been here, we have brought so many bills to the Floor and our Committees have been very active in preparing other legislation. Hence, these bills this week and next are now ripe.

One of them would further stop junk plans that can discriminate against people with pre-existing conditions, which I mentioned. Now, this is a further strengthening of that legislation, reversing the Trump Administration’s sabotage, once again, of enrollment outreach and to help states set up their own marketplaces and more strong action against Pharma’s unfair practices with additional steps to move affordable generics to market. Part of that bill is this week, part next week.

As we prepare to celebrate Mother’s Day, we’re continuing to fight to end the tragedy of maternal deaths in America. It’s just such a – it’s so remarkable in this county that we would have this.

We salute the leadership of Members to end this needless tragedy. Alma Adams of North Carolina and a Freshman Member, Lauren Underwood, are launching a Black Maternal Health Caucus, and we look forward to working with them.

And now, in terms of the disaster assistance – this week our Democratic Majority is advancing a robust, urgently-needed relief bill for disaster‑struck communities.

But the Republican Senate has done nothing. They haven’t taken up one bill. They haven’t initiated their own bill. And while they delay and drag their feet, the devastating floods have wreaked havoc and historic damage in the Midwest. So sad.

Our bill builds on the last supplemental, as I mentioned, bringing an extra $3 billion specifically for Midwest flood relief.

We will pass this bill immediately, tomorrow. Disaster‑struck communities can’t afford the Republicans’ inaction on this. So, hopefully the Republicans in the Senate will – the combination of our earlier bill and this bill that addresses more recent disasters will be something that they will let us proceed on.

I’ve said it before, maybe not to all of you, Mitch McConnell in his political solicitations describes himself as the ‘Grim reaper.’

Would you do that if you were running for office? Would you want that to be your pitch? ‘Let me give you hope and inspiration. I’m the Grim Reaper.’ Meaning that he’s going to kill every bill that comes over from the House.

Again, President Lincoln, ‘Public sentiment is everything. With it, you can accomplish almost anything. Without it, practically nothing.’ So, the grim reaper is going to be hearing from the alive and well people out there who care about this legislation, and many people do.

So, we have an opportunity. So the people want action. We’re going to demand it from the special interest Republican Senate. The American people will make their voices heard.

1 comment for “Fighting Back: “Improving instead of destroying the Affordable Care Act””