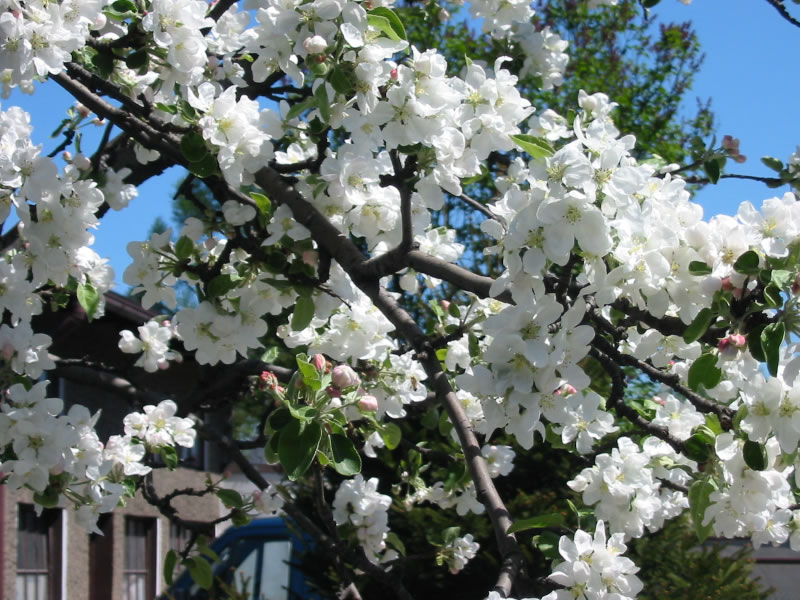 I spent the weekend in the garden, and the repetitive, simple acts of digging up unwanted re-seeders and spreaders (are they “weeds” if their only crime is being in the wrong place?) leaves one time to think. Did I ponder the meaning of life? Did I discover the cure for the common cold? Did I figure out the key to achieving world peace? Of course not. Instead, I found myself wondering why the Ohio state flower is the carnation, when it is far from a common or native plant grown in Ohio gardens. And then I wondered what the Michigan state flower was. (I grew up in Ohio, so I learned these basics in 8th grade Ohio history. I have far less knowledge of Michigan trivia.) This simple train of thought led to a rabbit hole of discovery which was more interesting than I would have anticipated.

An assassination led to the designation of Ohio’s state flower.
William McKinley was given a red carnation to wear as a boutonniere before a debate early in his political career, and when he won the debate and the subsequent election, he came to view the red carnation as his good luck charm. At first, he just wore the carnation during election cycles, but after winning the presidency for the first time in 1896, he started wearing a single carnation in his lapel all of the time. He even reportedly kept a bowl of red and white carnations in his office and would give visitors their own carnation. When out in public, he would give members of the public the flower from his own lapel, and it became customary for his aides to carry additional carnations with them, so that the superstitious McKinley could quickly replace his lapel flower. In 1901, shortly after the start of his second term, McKinley attended the Pan-American Exposition in Buffalo, NY:

While greeting the public, he met a 12-year-old girl named Myrtle Ledger who was there with her mother. Years later, Myrtle recalled that President McKinley said, “I must give this flower to another little flower,” and then he gave her his lucky carnation.
Minutes later, McKinley greeted another person in line—his assassin, Leon Czolgosz. The president was shot twice and died the following week from gangrene. That Time William McKinley Gave Away His Lucky Flower—And Then Died

In 1904, as a tribute to President McKinley, Ohio designated Dianthus caryophyllus, the red carnation, as the Ohio state flower.

Is a blossom a flower? In Michigan, it is.
April 28, 1897 was the date of passage of the joint resolution:

J.R. 10 of 1897
A JOINT RESOLUTION to designate and adopt a state flower.
2.11 State flower.
WHEREAS, A refined sentiment seems to call for the adoption of a state flower; and
WHEREAS, Our blossoming apple trees add much to the beauty of our landscape, and Michigan apples have gained a worldwide reputation; and
WHEREAS, At least one of the most fragrant and beautiful flowered species of apple, the pyrus coronaria, is native to our state; therefore
Resolved by the Senate and House of Representatives of the State of Michigan, That the apple blossom be and the same hereby is designated and adopted as the state flower of the state of Michigan. (April 28, 1897 : Apple Blossom Designated Michigan’s Official State Flower

Despite the abundance of perennial flowers to choose from, the State Legislature in Michigan chose to express their “refined sentiment” by designating the ephemeral apple blossom as the state flower. And despite singling out Pyrus coronaria (now Malus coronaria), the sweet crabapple, flower as worthy of note, the resolution does not, in fact, specify any particular genus or species for the state flower. Apple blossom, period. This curious choice does make it easy for the botanically-challenged. Come to Michigan in the spring, point to any apple tree or flowering crab in bloom, knowingly announce, “Ah, the Michigan state flower!”, and no one can argue.

The native state fruit most of us haven’t seen, much less eaten.
In 2009, the Ohio legislature was busy designating state fruits. The tomato became the official Ohio state fruit, which makes one think that someone had just learned that tomatoes are a fruit, not a vegetable, and wanted to show off their newfound knowledge. The native state fruit of Ohio was declared the pawpaw. At the time, the general reaction to the designation was, “The what?!” After the announcement, even the Christian Science Monitor published a story entitled, “America’s Forgotten Fruit.” It was a fruit well-known and spread by Natives. There is a story that the pawpaw kept Lewis and Clark alive when they ran out of provisions. But as a native Ohioan and true-blue Midwesterner, I can attest to the pawpaw’s rarity: I’ve never seen a tree in the wild or in cultivation and have never had the fruit. About the time grocery stores started becoming chains rather than local mom-and-pop establishments, the pawpaw started becoming invisible. It does not travel well; it bruises easily, and when it starts ripening, it ripens quickly. Likewise, pawpaw orchards are virtually unknown, and not just because of the difficulties in marketing the fruit. The blossoms of the pawpaw apparently stink (some say like the smell of rotting meat), which is a necessary attractant for their main pollinator, the blowfly. Having said all that, I’ve added “eating a pawpaw” to my bucket list and will be haunting farmer’s markets in the fall in search of the elusive pawpaw.

So if the Michigan state flower is the apple blossom, the Michigan state fruit must be the apple. Right? Right?!
Wrong. Michigan doesn’t have a state food of any sort; apparently refined sentiment has not yet called for such a declaration. I suppose if one wanted to get technical the state fish, the brook trout, or the state game animal, the white-tailed deer, qualify as state foods as long as one isn’t vegan, but there is no state fruit or vegetable. If I were the Queen of Michigan (just for a day; I’m not a monarchist at all), I would consider making the following declaration:

WHEREAS, the lack of a state fruit or vegetable seems like a glaring oversight; and
WHEREAS, Michigan is noted as the number one producer of this foodstuff in the country; and
WHEREAS, this is a Royal Pronouncement so I can stick it to 45* if I want, because he will associate this food with Mexico; therefore
Resolved by Queen-for-a-Day DoReMI, that the black bean be and the same hereby is designated and adopted as the state legume of the state of Michigan.

For folks whose knowledge of Michigan consists of Detroit and/or Ann Arbor, this statistic about our black bean production always comes as a bit of a surprise. But Michigan is a heavily-food producing state: number one in black beans; second in the nation for overall production of dried beans; number two or three in apples (depending on one’s source); first in asparagus; number one in pickling cucumbers; and number one in tart cherries. (Michigan Ag Facts) We do fruit and vegetables here in Michigan; we just don’t designate any one as an official food.

Can we just stipulate that state mottos are about the dumbest thing ever? Need evidence? I give you Ohio and Michigan.
To set the stage, let’s start with the definition of motto: 1. A short sentence or phrase chosen as encapsulating the beliefs or ideals of an individual, family, or institution. (definition motto) That seems straightforward enough, right up until the point one actually starts examining mottos.

In 1959, after going 90 years without having any state motto, Ohio adopted the suggestion of a 12-year old boy, a quotation from Matthew 19:26, “With God All Things Are Possible.” I self-identify as a Christian, and I am gobsmacked by this. Historically, it’s understandable, and given the gerrymandered make-up of the Ohio state legislature today, it’s still understandable. Even the lawsuit brought by the ACLU in 1997 and their loss is mostly understandable:

The American Civil Liberties Union filed a suit against Ohio and its state motto in 1997, claiming the biblical quotation violated the first amendment to the U.S. Constitution, which guarantees religious freedom and separation of church and state. Federal courts allowed Ohio to retain its motto, ruling that the state motto does not endorse a specific God and therefore was not a violation of the first amendment (four other states have mottos that contain the word “God”). Ohio State Motto

I get that the motto doesn’t refer to a specific god-figure and that it does not have the primary purpose of advancing religion. But really, Ohio? As the birthplace of eight presidents; as the 17th state in the union; as a state which was a key player in the Underground Railroad; as a staunch Union state…you couldn’t come up with anything else “encapsulating the beliefs or ideals…”?

Michigan, on the other hand, opted for the elegant Latin to express the mundane and self-evident: “Si quaeris peninsulam amoenam, circumspice,” meaning “If you seek a pleasant peninsula, look about you.” Who comes up with this stuff? Well, in the case of Michigan, it appears that the Revolutionary War and the War of 1812 hadn’t quite dampened all interest in things British. Adopted in 1835, it is said to have been suggested by the mural inscription on the north door of St. Paul’s Cathedral in London, which reads, “Si Monumentum Requiris Circumspice” (If you seek a monument, look around you). The St. Paul’s inscription was placed by Christopher Wren’s son as a dedication to his father, the architect of St. Paul’s. So Michigan gets a prize for obscure influences, as well as a motto worthy of any tourism board. Don’t start feeling too superior though; the article her provides a [scathing] ranking of all 50 state mottos. Nobody does particularly well: All 50 State Mottos, Ranked

Pull up a chair, grab a pawpaw, and use the comments to brag, inform, or complain about your state and its symbols.