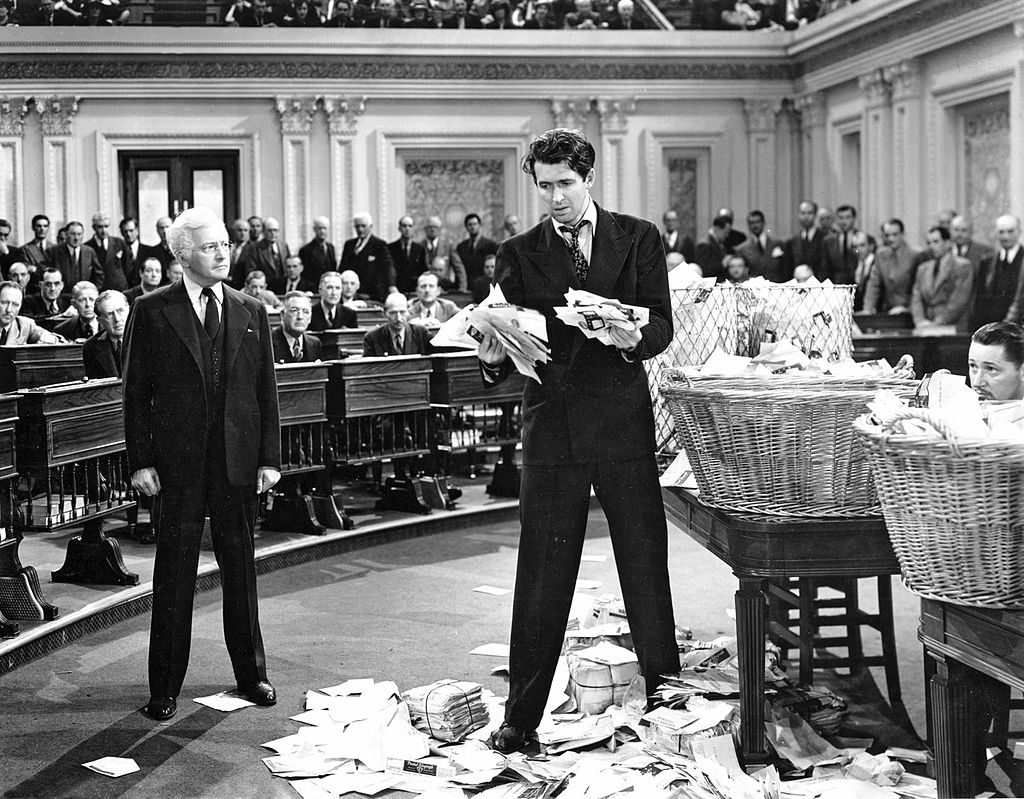 Promotional still from the 1939 film Mr. Smith Goes to Washington, published in National Board of Review Magazine; November 1939.

On December 20, 2018, the Justice for Victims of Lynching Act of 2018 passed the Senate by unanimous consent. After 200 attempts since 1882, this was the first federal anti-lynching legislation to pass in the Senate. It was passed again by unanimous consent in the 116th Congress in February 2019 and sent to the House, where it has been referred to the Subcommittee on Crime, Terrorism, and Homeland Security. (Justice for Victims of Lynching Act of 2019) If passed by the House and signed by the Current pResident, the legislation will be historic and unfortunately, still necessary:

Sens. Kamala Harris, D-Calif., Cory Booker, D-N.J., and Tim Scott, R-S.C., drafted the bipartisan legislation, which defines the crime as “the willful act of murder by a collection of people assembled with the intention of committing an act of violence upon any person.” It also classifies lynching as a hate crime that would warrant enhanced sentences.
“It’s a travesty that despite repeated attempts to do so, Congress still hasn’t put anti-lynching legislation on the books,” Booker said in a statement. “This bill will right historical wrongs by acknowledging our country’s stained past and codifying into law our commitment to abolishing this shameful practice.” African-American Senators Introduce Anti-Lynching Bill

I was reminded of this legislation when I was considering the lengths to which white supremacists will go to retain power, which in turn reminded me of a previous anti-lynching bill and the 6-week filibuster. That story follows.
The Wagner-Van Nuys Anti-Lynching bill was a well-planned legislative push but an accident of timing. As the 81st Congress prepared to close, the Majority Leader, Alben Barkley (D-KY) thought he had every action planned for the waning moments before adjournment. When another senator missed their cue to present a bill, Senator Robert Wagner (D-NY) used the lapse to introduce the Wagner-Van Nuys Anti-Lynching Bill. Because of the history of Southern senators filibustering any and all anti-lynching legislation attempts, Leader Barkley made a deal with Sen. Wagner that if he would withdraw the legislation, it would be taken up in the next session, right after the Farm Bill was considered. Time magazine reported:

When the special session opened last November with no Farm Bill in sight, Alben Barkley, like a Confederate general trapped into acting as a front for a group of carpetbaggers, unhappily unloosed the Wagner-Van Nuys Bill and its inevitable filibuster. It was temporarily laid aside when the Farm Bill appeared, but nothing is more important to a legislative leader than to keep his promises to the letter. So no sooner was the President’s message out of the way last fortnight than Alben Barkley, still smarting from the abuses of the last filibuster, fulfilled his pledge, produced the Anti-Lynching Bill for what he hoped would be the last time. (The Congress. Black’s White, January 24, 1938)

The bill itself had many of the same provisions of previous bills, as well as being quite similar to an anti-lynching bill that had already passed the House. The bill enabled Federal prosecution; levied a $5000 fine or 5-years imprisonment or both for sheriffs or police who did not take reasonable precautions to protect the accused or convicted from mobs; and provided a payment of up to $10,000 to families of victims of mob violence by the county responsible. (It included an amendment brought in the Judiciary Committee by a Dem Senator which exempted counties from liabilities related to gang murders or labor violence.) That amendment alone became a talking point for the filibuster team organized by Texas senator, Tom Connally (D). The principal filibuster speakers were Richard Russell (D-Ga), Josiah Bailey (D-NC), Robert Reynolds (D-NC), James Byrnes (D-SC), Kenneth McKellar (D-TN), Allen Ellender (D-LA), and Pat Harrison (D-MS). Although a filibuster did not require talking about the bill being delayed from consideration, the IL amendment gave Sen. McKellar the opportunity to speak at length about the nature of Chicago jurisprudence, essentially trolling the Democratic senator (and majority Whip) who had inserted the amendment. The inclusion of the amendment was viewed as an intentional and spiteful insertion of regional divisiveness, and Southern sensitivities about the potential reemergence of Reconstruction-era policies heightened.

Other senators did not fare so well in their comments.

“Whenever the Republican Party, the Democratic Party or the New Deal Party or any other party,” rumbled North Carolina’s Josiah Bailey, “caters to the Negro vote, it is going to elect to office common fellows of the baser sort.” But when Kenneth McKellar began scornfully quoting from the bill in an effort to establish its unconstitutionality, Senator Wagner pointed out that the passage in question was a quotation from the Fourteenth Amendment. “Yes,” stammered Senator McKellar, “it is.” (The Congress. Black’s White, January 24, 1938)

Unfortunately, Sen. McKellar was the exception, rather than the rule in terms filibustering expertise. Senator Ellender spoke for more than 27 hours; his arguments were considered relatively moderate in an increasingly hostile filibuster. He spoke about the rise and fall of civilizations and argued that “racial mongrelization” was the cause of fallen civilizations. He spoke of his desire to see the 15th Amendment repealed and his own intent to introduce legislation making interracial marriage a Federal crime.

For Bilbo, Wagner’s bill would “open the floodgates of hell in the South” and ignite a firestorm of looting, rape, and lynching. He ranted, “upon your garments and the garments of those who are responsible for the passage of this measure will be the blood of the raped and outraged daughters of Dixie, as well as the blood of the perpetrators of these crimes that the red-blooded Anglo-Saxon white southern men will not tolerate.” With substantial quotations from Madison Grant and other pseudo-scientific racists, the Mississippian warned that “hybrids” would destroy American civilization. Bilbo saw the only solution to America’s racial problem in the deportation of all blacks to Africa, and his plan was strikingly ingenious: the French and the British would pay off their war debts to the United States by handing over their African territories to serve as a home land for American Negroes. If, however, misguided northerners insisted on interfering in racial questions, they should hardly “object if one of the nice daughters from one of the aristocratic homes marries some ‘buck nigger’ from Kalamazoo.” (Source: Rable, George C. “The South and the Politics of Antilynching Legislation, 1920-1940.” The Journal of Southern History 51, no. 2 (1985): 201-20. doi:10.2307/2208825, p. 217.)

While all of this was happening in the Senate, the White House was silent. Despite Eleanor Roosevelt’s support for anti-lynching measures and her conversations with President Roosevelt, Roosevelt stayed silent. The country was in the grips of the Roosevelt recession, a direct result of Roosevelt’s premature pivot from the New Deal to austerity to bring the budget into balance. With a legislative agenda intended to return to New Deal principles, Southern Democratic support could not be endangered. The [white] political will was not with the NAACP and African-Americans, and a prolonged filibuster was an ongoing reminder of what was not getting accomplished, including delaying a $250 million WPA budget appropriation. With the perception, fed by Southern Democrats, that lynching was a diminishing problem, it became clear that the proposed legislation was not going to survive the filibuster. On February 22, 1938, the Senate ended a six-week filibuster on the Wagner-Van Nuys Anti-Lynching Bill, voting 58 to 22 to lay the bill aside.