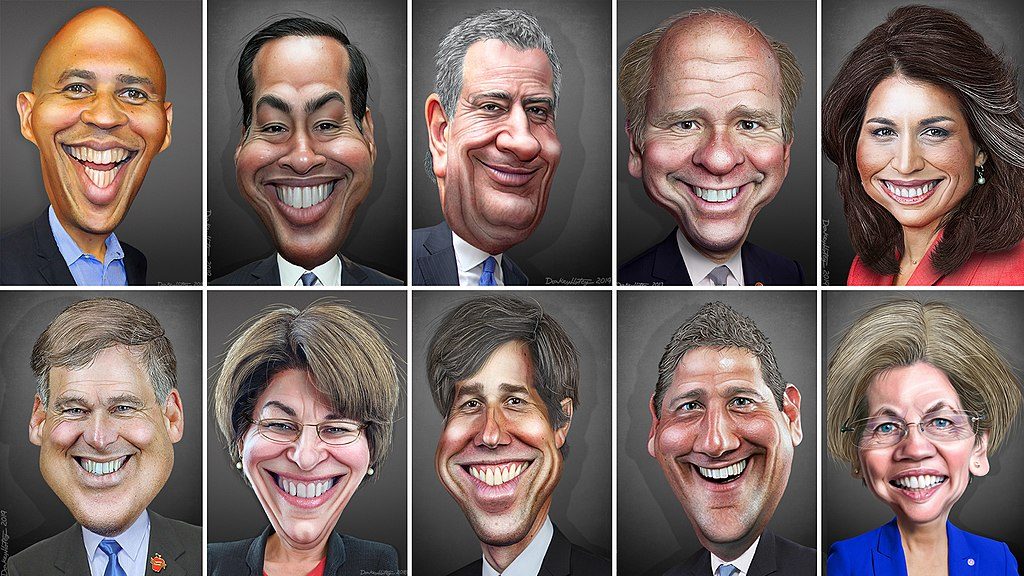 My Tuesday post featured thumbnails of the “top row” candidates; this is a continuation of that overview, this time featuring the bottom row.
Jay Inslee
Campaign slogan/theme: Our Moment; Inslee is running as the climate change candidate, so the tagline on his website expands on the motto with, “This is our moment to defeat climate change.” (Gov. Inslee campaign website)
Plan to brag about: “An Evergreen Economy for America” is Inslee’s comprehensive climate plan.

Governor Inslee’s Evergreen Economy Plan is a forward-looking approach that will revitalize America’s economy for the 21st century. This comprehensive suite of 28 policy initiatives will put Americans to work in every community. It is based on an expansive approach to the clean energy economy: It will create jobs for technicians installing solar panels, electricians upgrading buildings, engineers designing smart grid solutions, and pipefitters upgrading water infrastructure. Governor Inslee’s plan includes programs to spur growth and build infrastructure in rural communities — from agricultural innovation to rural electrification. And this plan also includes investments in affordable housing and municipal infrastructure, which will be especially important to revitalizing urban communities and creating jobs across the country.

If moderators are seeking to gin up controversy and make headlines, they will ask Inslee about: his role in keeping Boeing’s 777 plant in Washington, partially through offering the largest corporate tax break in U.S. history. The tax break did not include job guarantees, a loophole which Boeing used to eliminate 20,000 jobs in WA. Boeing also leveraged their position with the state by insisting that the Machinist union cancel workers’ pensions; this condition became part of the final deal.

Amy Klobuchar
Campaign slogan/theme: It appears that Sen. Klobuchar does not have any published campaign motto, slogan, or theme. I have considered that perhaps this is a failure of my search ability; if it is, please inform me in the comments. Sen. Klobuchar’s website, Amy for America, is here: Amy for America
Plan to brag about: One Hundred Day Plan; Sen. Klobuchar has released a list of 100 actions she intends to take in the first 100 days of her administration. Some of the actions would be through executive orders, while others entail introducing legislation. The entire list can be read here: Amy’s First 100 Days. Additionally, Klobuchar recently released a $100 billion plan for fighting substance abuse and improving mental healthcare, an extension of her work in the Senate, as well as a personal priority as the daughter of a [recovered] alcoholic. (Note: Knowing this detail about Klobuchar’s life makes Judge Kavanaugh’s comments directed at her at his confirmation hearings even more appalling.)
If moderators are seeking to gin up controversy and make headlines, they will ask Klobuchar about: the allegations regarding her temper and staff “mistreatment.” Klobuchar has addressed these questions and charges in the past, but her answers have not proven satisfactory to the media.

She added that she thinks it’s important to “demand good product” and that “you want someone that demands the answers and that’s going to get things done, and that’s what I’ve done my whole life.” (On Being Tough)

Beto O’Rourke
Campaign slogan/theme: Beto for America, Beto for All. A tagline on his campaign website (Beto O’Rourke) states, “A campaign by all of us, for all of us.”
Plan to brag about: Veterans Healthcare Trust Fund; this policy was released just this week, but is a continuation of O’Rourke’s House priorities as well as previously-released veteran policies.

“We must be willing to pay any price, and bear any burden, to provide the full care, support, and resources to every single veteran who served every single one of us,” O’Rourke said in a statement, adding that the best way to honor veterans is to “cancel the blank check for endless war — and reinvest the savings to ensure every American can thrive upon their return home.”

The war tax would be a progressive tax on adjusted gross income, ranging from $25 for those making less than $30,000 per year to $1,000 for those earning over $200,000 every year. The tax “would serve as a reminder of the incredible sacrifice made by those who serve and their families,” O’Rourke’s plan says. (Beto O’Rourke releases veterans plan with health care trust fund, “war tax”)

If moderators are seeking to gin up controversy and make headlines, they will ask O’Rourke about: the perception that he initially lacked a Reason Why. In recent weeks, he has addressed this, including during an appearance on The View:

…appearance on The View that cut right to the biggest misstep of his early campaign, a frenetic rollout that began with a cover story in this magazine featuring his now-infamous quote, “I’m just born to be in it.” O’Rourke apologized for the quote and the decision to be profiled by Vanity Fair after being tracked down by writer Joe Hagan, who’d already assembled a rich biographical story. “I think it reinforces that perception of privilege,” he told the hosts. “And that headline that said ‘I was born to be in this,’ in the article I was attempting to say that I felt that my calling was in public service. No one is born to be president of the United States of America.” Though it’s hard to imagine any presidential candidate who doesn’t harbor some version of this sentiment, that single quote read to many as an emblem of white male privilege in a Democratic primary that was already pulsing with identity politics. It highlighted a certain guilelessness, in a campaign stacked with more experienced, more diverse candidates with deep policy chops. (“You Have to Have a Plan to Deal with Them”: How the Media Fell Out of Love with Beto O’Rourke)

Tim Ryan
Campaign slogan/theme: From information on his website (Tim Ryan for America), it appears his theme is “Our Future is Now: Rebuilding the American Dream.”
Plan to brag about: Although his website currently doesn’t have an issues page, he does highlight areas that are of particular importance to him by way of introducing himself. It’s clear his focus is with the American worker:

Ryan is running a campaign focused on rebuilding and reinventing the economy as a “green economy,” and investing in American jobs. In February, Ryan introduced the WORKER (Working on Rewarding and Keeping Employees Resilient) Act, an attempt to resolve issues of job loss and wage stagnation due to automation and outsourcing by creating educational programs in engineering, expanding apprenticeships, and offering training vouchers and re-employment bonuses…

“We can’t just go ask people to pay more in taxes and dump them into these old systems. So, I’m a reform-minded Democrat that believes that if we’re going to ‘green’ the economy you need the innovation and the power of the free market to do that,” he said. (What does Tim Ryan believe?)

If moderators are seeking to gin up controversy and make headlines, they will ask Ryan about: his relationships with two noted fluoride and vaccine skeptics (Tim Ryan’s Long, Weird History of Palling Around With Fluoride and Vaccine Skeptics). Although his association with the blogger and the doctor should not result in their beliefs being ascribed as his own, the guilt-by-association impulse of the media is strong. However, given Ryan’s explicit attempts to connect with a “counter-cultural” public, he should be prepared for questions.

Elizabeth Warren
Campaign slogan/theme: It doesn’t appear that Sen. Warren has an official slogan, but between, “Nevertheless, she persisted” and “I’ve got a plan for that”, it seems she’s covered for now.
Plan to brag about: No. Just no. “I have a plan for that” is not an exaggeration, so I’m not even going to try to pick one. If you want to review her policy proposals, pour a [large] drink and read them here: Elizabeth Warren issues page. Rather than picking out one particular plan, I think it’s worth noting that Warren has managed to make having an enormous number of policies one of the central elements of her campaign. Whether voters read the policies (a problem Sec. Clinton would be familiar with) will be quite another challenge.
If moderators are seeking to gin up controversy and make headlines, they will ask Warren about: her erroneous claim to Native American ancestry. At this point, it appears that many voters are willing to move on from this story, but not all Natives feel she has adequately or sincerely apologized for what is viewed as disrespect and even appropriation.

That covers the final five candidates of the Wednesday debate. I hope this helps you with your viewing tonight.