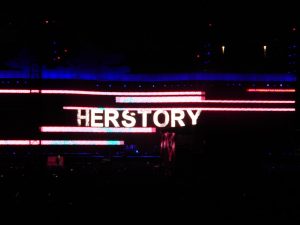 We need more of this.

I’ve been wanting to do some hardcore herstory for awhile, but “hardcore” equals “lots of reading,” and that’s something that goes by the wayside for me during the summer months. So instead of Herstory, I’ve opted for SHEnanigans, which is my abbreviated version of herstory. Skip the first several dictionary definitions for shenanigans until you get to “high-spirited behavior,” add women, and you have SHEnanigans.
Hallie Flanagan, the Federal Theater Project of the WPA, and the House Un-American Activities Committee (HUAC)
Ms. Flanagan is one I want to do a full-scale herstory on at some point, because she’s a shero we never knew we needed. But until the time when I have the time, I’ll whet your appetite. Hallie Flanagan was the director of the Federal Theater Project (FTP) from 1935-1939. In 1938, Flanagan was called to testify before HUAC after disgruntled, sometimes dishonest, and mostly former FTP participants claimed that the project was effectively a Communist front group. Flanagan answered questions but was never allowed to address and discredit the previous testimony against the FTP, which she was prepared to do. The following clip is well worth watching; the script is based on the transcript of Flanagan’s testimony:

CLIP FROM THE MOVIE “THE CRADLE WILL ROCK” IN WHICH HALLIE FLANAGAN, THE DIRECTOR OF THE WPA THEATRE PROJECT, TESTIFIES BEFORE THE HUAC. TAKEN DIRECTLY FROM THE TRANSCRIPTS OF THE HEARING.

Vivian Boyack (1923-2016) and Alice “Nonie” Dubes (1923- )
Vivian and Nonie were the epitome of Browning’s words, “Grow old along with me! The best is yet to be.” They were married in 2014, 72 years after they first started dating, when Boyack was 91 and Dubes was 90. Their pastor said, “This is a celebration of something that should have happened a very long time ago”, while the newlyweds were saying it was never too late for a new chapter in life.

On their first wedding anniversary, after the international publicity had died down, their celebration was low-key and mostly unnoticed by the media.

“We heard from 25 countries and all over the United States. People wanted to write books and all sorts of things,” Dubes said.

They spend most of their days as they did before they were married – maintaining their four-room apartment and zipping around their retirement village on electric scooters.

“After all, we’re 92 years old,” Dubes said. “And it’s time for us to go to dinner now.” Iowa women mark first wedding anniversary after 73 years together

Vivian died in 2016, 74 years after she and Nonie first met and fell in love. They didn’t set out to beat the bigots, but somehow I think they did.

Christine Lagarde, the woman most of us had never heard of before this weekend, is someone most of us should have heard of before this weekend.
I’ll be the first to admit that until Christine Lagarde gave Ivanka the side-eye she so richly deserved, I had not heard of Ms. Lagarde. I don’t know her history: personal, educational, or professional. They’re all areas “to be researched.” But I do know that in the 9 minute interview below, she impressed the heck out of me (and now a quick read of her wiki page has added to that perception). Enjoy this interview with the woman that in 2018 Forbes magazine declared as the third most powerful woman in the world.

Abigail Adams, first Second Lady and second First Lady, as well as the one urging John Adams to remember the ladies. With the approach of Independence Day, remembering this lady seems appropriate.

I long to hear that you have declared an independency. And by the way, in the new Code of Laws which I suppose it will be necessary for you to make I desire you would Remember the Ladies, and be more generous and favourable to them than your ancestors. Do not put such unlimited power into the hands of the Husbands. Remember all Men would be tyrants if they could. If particular care and attention is not paid to the Ladies we are determined to foment a Rebellion, and will not hold ourselves bound by any Laws in which we have no voice, or Representation.
ABIGAIL ADAMS, letter to John Adams, Mar. 31, 1776

John Adams, despite his love and respect for Abigail, did not love or respect her plea (third photo):

Abigail was not impressed:

I cannot say that I think you very generous to the Ladies, for whilst you are proclaiming peace and good will to Men, emancipating all Nations, you insist upon retaining an absolute power over Wives. But you must remember that arbitrary power is like most other things which are very hard, very liable to be broken–and notwithstanding all your wise laws and maxims we have it in our power not only to free ourselves but to subdue our Masters, and without violence throw both your natural and legal authority at your feet.
ABIGAIL ADAMS, letter to John Adams, May 7, 1776