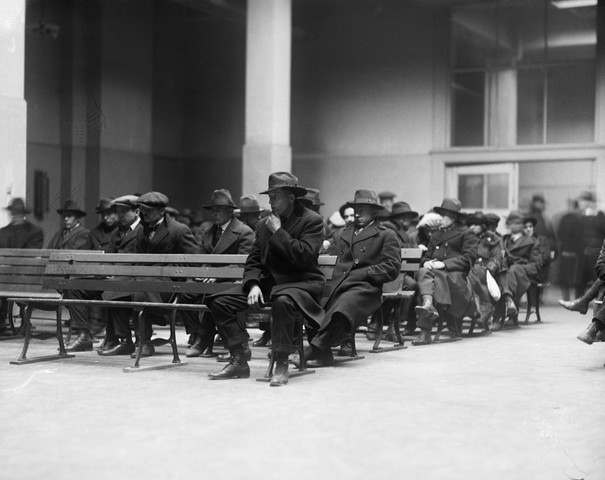 New York, New York, USA — 1/3/1920-New York, NY: Photo shows anarchists, reds, and radicals who were rounded up in NYC in last nights raids, arriving at Ellis Island. These undesirables will remain at Ellis Island until investigation and deportation proceedings have been completed. Many arrested in Newark and other nearby cities arrived at the Island during the afternoon. — Image by © Bettmann/CORBIS

I’m keeping my fingers crossed that my internet connection issues are history, and I’m going to work the plan that I had last week…tidbits by tweet today and text on Thursday. While the Current Occupant has settled on a strategy of distraction by rallying his base through crass racism, the fact remains that families are still being separated; the international understanding of the rights of asylum seekers is being ignored and upended; and our own understanding of who we are is being challenged and redefined. The latter, of course, has the potential to be the silver lining for our future, but we have a long way to go before that potential is fulfilled. For now, we have to look at the evil of our past, of our present, and in all likelihood, of our future, and be prepared to eradicate it with truth and through reconciliation.
Cruelty as the basis for community.

I did a video explaining why for Trump, “the cruelty is the point” https://t.co/FScDGAF638

It’s going to get worse before it gets better if Miller has his way.

“My mantra has persistently been presenting aliens with multiple unsolvable dilemmas to impact their calculus for choosing to make the arduous journey to begin with.” https://t.co/2Fwaj9RIS0

Fun fact: “All of Michigan is an ICE ‘border zone,’ which means that residents are subject to warrantless searches and detention. The Fourth Amendment, which protects Americans from those random and arbitrary stops and searches, doesn’t apply, since the state is surrounded by the Great Lakes and falls within 100 miles of a border.” (Michigan)

Tomorrow the #DemDebate begins in Michigan, the state with 2nd highest rate of ICE arrests.

Will all 2020 candidates commit to ending all detention and deportation on day 1?

In the 1950s, over a million people, some of them U.S. citizens, were deported to Mexico in “Operation Wetback”:https://t.co/gmU9HiMZGo

I’ve got no problem with loving the idea of what we can be, but can we please, please retire this damned phrase?