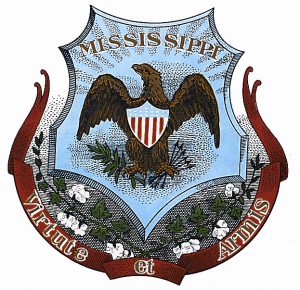 By valor and arms

On September 5th, Janesaunt posted at The Orange about Jennifer Riley Collins, who is running for AG for Mississippi (this is the diary) and the intentional structural difficulties faced by African-American candidates in MS. In the course of preparing her diary, JA discovered and shared some of the grossly racist history of MS and especially the ways in which their constitution is written to ensure the continuance of white supremacy. My history antenna immediately started tingling, and I wanted to take a deeper look at Mississippi’s constitution and history. As so often happens, I meandered a bit in my reading, so what follows is more stream-of-consciousness than a primer on MS. But mostly, it’s a reminder that the Civil War has never ended; it’s just the battlefields and choice of weapons that have changed.

If one wants to label the history of the South particularly as it relates to race relations, one need only turn to historians to read about the antebellum period, the Civil War years, the Reconstruction era and fusion politics, and the Nadir. The first three are common and not limited to use by historians alone, but fewer people have heard the term Nadir used as a description of an historical era. For our purposes, the Nadir is the period from the 1890s to the 1940s when race relations deteriorated and racism triumphed.

Why choose 1890? It’s not just that the memories of the war had faded by 1890. It’s that in 1890 what little of Native independence was left was destroyed at Wounded Knee, chalking up another victory for white supremacy. It’s that in 1890 the Federal Elections Act (the “Lodge Bill”) was defeated in the Senate. The Lodge Bill would have given the Federal government the tools to ensure that elections were fair, allowing the courts to appoint federal supervisors who would monitor congressional elections and intervene in instances of violence and fraud. The bill was filibustered, and Republican support was traded away for Southern support of votes on economic issues and bills, rather than providing support, safety, and fairness for African-American voters in the South. It’s that in 1890, Mississippi enacted a new constitution that included provisions which flagrantly violated the 14th and 15th Amendments, but the Federal government did nothing. In 1890, White folks decided that African-Americans were on their own.

What was in the 1890 Mississippi constitution that should have raised objections if white supremacy wasn’t the goal? Perhaps it was this Article 12 provision:

Sec. 243. A uniform poll tax of two dollars, to be used in aid of the common schools, and for no other purpose, is hereby imposed on every male inhabitant of this State between the ages of twenty-one and sixty years, except persons who are deaf and dumb or blind, or who are maimed by loss of hand or foot; said tax to be a lien only upon taxable property. The board of supervisors of any county may, for the purpose of aiding the common schools in that county, increase the poll tax in said county, but in no case shall the entire poll tax exceed in any one year three dollars on each poll. No criminal proceedings shall be allowed to enforce the collection of the poll tax. (Article 12, Sec. 243) For the record, that $2 is the rough equivalent of $55 today.

If Section 243 wasn’t blatant enough (and it did disenfranchise some poor whites), this section left no doubt as to the intent of the Mississippi state government:

Sec. 244. On and after the first day of January, A. D., 1892, every elector shall, in addition to the foregoing qualifications, be able to read any section of the constitution of this State; or he shall be able to understand the same when read to him, or give a reasonable interpretation thereof. A new registration shall be made before the next ensuing election after January the first, A.D., 1892. (Article 12, Section 244)

The “reasonable interpretation” was left to the local registrars, and in some counties, not a single African-American was registered. The plan to “exclude the Negro” was working.

The literacy test did not just exclude the 60 percent of voting-age black men (most of them ex-slaves) who could not read. It excluded almost all black men, because the clerk would select complicated technical passages for them to interpret. By contrast, the clerk would pass whites by picking simple sentences in the state constitution for them to explain.

Mississippi also enacted a “grandfather clause” that permitted registering anyone whose grandfather was qualified to vote before the Civil War. Obviously, this benefited only white citizens. The “grandfather clause” as well as the other legal barriers to black voter registration worked. Mississippi cut the percentage of black voting-age men registered to vote from more than 90 percent during Reconstruction to less than 6 percent in 1892. (Race and Voting in the Segregated South)

The Mississippi constitution was adopted without being sent to the people of Mississippi for ratification, despite Article 3, Section 5, which states, “All political power is vested in, and derived from, the people; all government of right originates with the people, is founded upon their will only, and is instituted solely for the good of the whole.” The authoritarian nature of the antebellum South was not eradicated; it was merely cleaned up and dressed in new finery. The new finery of the Mississippi constitution attracted the attention of other Southern states, and in short order, they too adopted new constitutions with sections intended to disenfranchise African-Americans.

In Five Myths About Reconstruction, James Loewen explains that Mississippi set a precedent for the rest of the South. “Every Southern state instituted literacy tests and poll taxes to effectively remove African Americans from the citizenship they were supposed to have been guaranteed by the 14th Amendment.” This can be seen in the state constitutions with similar voter-suppression statutes adopted by South Carolina (1895), Louisiana (1898), North Carolina (1900), Alabama (1901), Virginia (1901), Georgia (1908), Oklahoma (1910), and more. (Nov. 1, 1890: Mississippi Constitution)

Janesaunt also covered the lawsuits being brought by the Southern Poverty Law Center (SPLC) and by Eric Holder’s National Democratic Redistricting Committee (NDRC) which are challenging provisions of the 1890 constitution which were intended to enable discriminatory and racist voter suppression through disenfranchisement of felons, but in ways that may not be as obvious in the 21st century. In 2018, the Mississippi governor Phil Bryant made it clear that he saw no need for changes: “There is a price to pay for violating the laws of the state of Mississippi, particularly a felony,” he said recently. “And one of them is that you lose your right to vote unless it is restored by the Mississippi Legislature. … I wouldn’t want to change it.” (Lawsuit: Mississippi Constitution still disenfranchising thousands) Although Section 241 has been amended over the years, the original provision was effective in achieving its goal of permanent disenfranchisement.

Sec. 241. Every male inhabitant of this State, except idiots, insane persons and Indians not taxed, who is a citizen of the United States, twenty-one years old and upwards, who has resided in this State two years, and one year in the election district, or in the incorporated city or town, in which he offers to vote, and who is duly registered as provided in this article, and who has never been convicted of bribery, burglary, theft, arson, obtaining money or goods under false pretenses, perjury, forgery, embezzlement or bigamy, and who has paid, on or before the first day of February of the year in which he shall offer to vote, all taxes which may have been legally required of him, and which he has had an opportunity of paying according to law, for the two preceding years, and who shall produce to the officers holding the election satisfactory evidence that he has paid said taxes, is declared to be a qualified elector; but any minister of the gospel in charge of an organized church shall be entitled to vote after six months residence in the election district, if otherwise qualified. (Article 12, Section 241)

The current, amended Section 241, which is being challenged in the courts reads:

SECTION 241.
Every inhabitant of this state, except idiots and insane persons, who is a citizen of the United States of America, eighteen (18) years old and upward, who has been a resident of this state for one (1) year, and for one (1) year in the county in which he offers to vote, and for six (6) months in the election precinct or in the incorporated city or town in which he offers to vote, and who is duly registered as provided in this article, and who has never been convicted of murder, rape, bribery, theft, arson, obtaining money or goods under false pretense, perjury, forgery, embezzlement or bigamy, is declared to be a qualified elector, except that he shall be qualified to vote for President and Vice President of the United States if he meets the requirements established by Congress therefor and is otherwise a qualified elector. (Article 12, Section 241)

This post has been about some of the nuts and bolts of what was happening during the Nadir.  This was an era of neo-Confederate strength and the development of the Lost Cause mythology.  If I remember (no promises!), I’ll do a post about some of the key elements of that mythology next week.  No surprise…those elements will sound incredibly familiar.