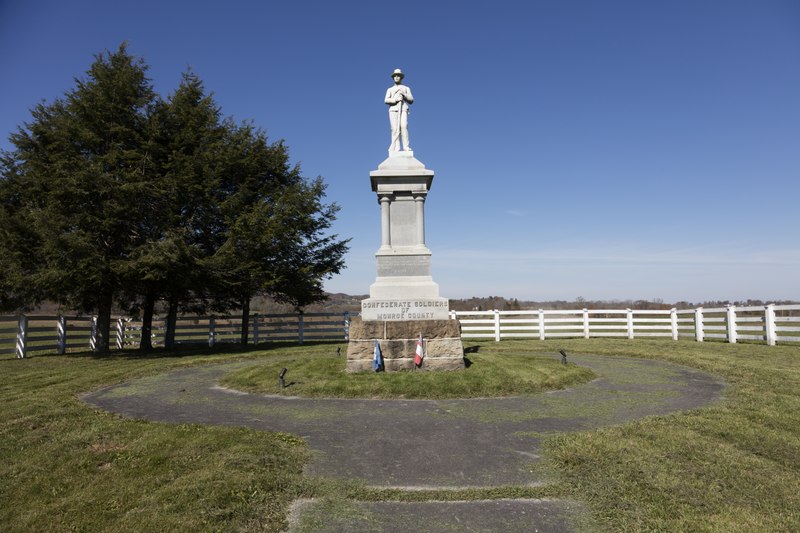 During the years of the Nadir (for our purposes, roughly 1890-1940), the stellar citizenship and nobility of the Southern soldier, especially the officers, was promoted endlessly…and necessarily. With whites once again solely in power after sharing of governmental responsibilities with African-Americans during Reconstruction, every effort was made to erase memories of slavery and the treatment of the enslaved. Part of that effort required casting the Southern soldier as, not the insurrectionist upholding the institution of slavery, but the Southern gentleman defending a genteel way of life, the honor of Southern womanhood (now suddenly far more helpless than in real life), and a morally-superior rural focus vs. the big city, big business Northern way of greed.

Modesty, gentleness, simplicity, benevolence and Christian humility added to Robert E. Lee’s military genius made him the man whom the South prizes as its individual and national exemplar.

Notwithstanding international edict and national law, to all of which I yield perfect obedience, there is and will be a national South in the hearts of her true people; and may God let it live, because it symbolizes chivalry, truth, honor, pride, patience, and self-abnegation, as the life of Robert E. Lee exemplified; not only by our estimation, but by that of the London Standard: “A country which has given birth to men like him, and those who followed him, may look the chivalry of Europe in the face without shame, for the fatherlands of Sidney and Bayard never produced a nobler soldier, gentleman, and Christian than General Robert E. Lee.” (Robert E. Lee Centennial Celebration, 1907)

Dedicated to the faithful slaves who, loyal to a sacred trust, toiled for the support of the army with matchless devotion and sterling fidelity [and] guarded our defenseless
homes, women and children during the struggle for the principles of our “Confederate States of America.” (Historical marker to the faithful slaves)

NOW:
Searching for Black Confederates: The Civil War’s Most Persistent Myth Be certain to read at least one of the one-star reviews.

To continue the practice of white supremacy, the efficacy of Reconstruction had to be questioned, if not outright discredited. During Reconstruction, all of the Southern states still had white governors and white legislative majorities, but by falsely claiming a black “takeover,” a Northern invasion, and widespread corruption, the case for restrictive laws and denying full citizenship to black Southerners was made. Unsurprisingly, this rewriting of history was possible because the North was complicit. White supremacy had become the accepted way to order society.

They found at home 4,000,000 slaves suddenly emancipated as a result of the war. They realized that the greatest problem any people had ever had to solve on sudden notice faced them. The negroes, as was natural that it should be, were greatly demoralized, and had but a faint conception of the responsibility of the freedom that was theirs, and that they knew had been brought about by the defeat of the Southern armies. Large numbers of them thought that freedom meant a cessation of labor on their part, and that the great government which had freed them by force of arms would feed, clothe and provide for them. They generally left their work in the fields and went in crowds to the cities and towns, where they were fed and cared for at teh expense of the United States government. (“THE NADIR OF RACE RELATIONS, 1890–1940.” In The Confederate and Neo-Confederate Reader: The “Great Truth” about the “Lost Cause”, edited by Loewen James W. and Sebesta Edward H., p. 260. University Press of Mississippi, 2010.)

This period was a very trying one, and brought out prominently the leading characteristics of the Southern people in their resolve never again to submit to negroism and its baneful results. The Southern people knew that they alone could solve the great social problem of the races. They, white and black, lived together; they had seen that the effort made by strangers from the North, who had attempted to administer their affairs when local self-government had been suppressed, had proved to be a woeful failure. (Ibid, p. 261.)

NOW (seriously; the arguments of the Dunning School are still found in textbooks today):

The Dunning School of history (named after William A. Dunning) propagated the myth that Reconstruction had been a dramatic failure and that black people were not ready to govern. Professors promulgated this propaganda in colleges around the nation.#ReconstructionPBS pic.twitter.com/HLuGFA1nOn

Well deserved publicity for this study by @leah_boustan, @K_A_Eriksson and Philipp Ager. The data analysis behind it is extraordinary.