The Weekly Democratic Party Address was delivered by Senator Dick Durbin of Illinois, calling out the Republican Party’s diversion of funds earmarked for military families towards building their president’s vanity wall.

"President Trump is using a national emergency declaration to take away billions of dollars from our military and their families—and unfortunately Republicans in Congress are helping him." —@SenatorDurbin pic.twitter.com/BHfPJGrpsj 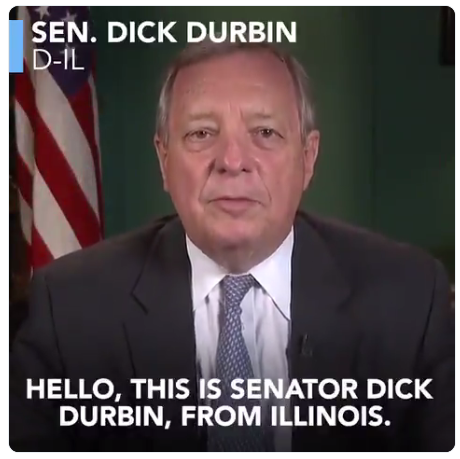 No transcript of the address was provided but the CSPAN link has closed caption text: CSPAN link to Weekly Democratic Address: here.

It’s a sad week for our country. Very prayerfully and patriotically, we had to come to a decision to move forward with an impeachment inquiry of the President of the United States.

This is nothing that we take lightly. And, in trying to balance our responsibility to protect and defend the Constitution of the United States in a way that was not divisive in our country but uniting in our country, we wanted to have a fuller understanding of the facts.

Last week, we saw something that removed all doubt as to whether we should move forward, with this distinct change in the body of knowledge that we had on which to make a decision. So when people say to me, ‘What made you change my mind?’ I didn’t change my mind. I’ve always been on the course of finding the facts as we honor our Constitution.

And the facts are these: that the President of the United States in his actions in a telephone call with a head of state betrayed his oath of office, our national security and the integrity of our elections.

There are some in our Caucus who think, ‘Let’s just have an impeachment.’ No, we have to have an inquiry to further establish the facts. There is no rush to judgment. And, in some ways, we are a jury, open to what might be exculpatory or not.

But, every day the sadness grows because the disregard for our Constitution that the President has becomes more clear.

I’ll just read from the complaint, which is now public, but which I saw yesterday when it wasn’t. The complaint states the White House tried to ‘lock down all records of the call, especially the word‑for‑word transcript.’ That gave the whistleblower reason to believe that they, the White House, ‘understood the gravity of what transpired in that call.’

The complaint reports a ‘repeated abuse of an electronics record system designed to store classified, sensitive national security information, which the White House used to hide information of a political nature.’

Let me just say a word about whistleblowers. First, let me say how proud I am of our Members in our Caucus for the thoughtfulness that they have brought to this. Some with their own timing. Others, like our Freshmen Democratic defense Members with their beautiful statement earlier in the week, after seeing what their letter alleged about the President.

I also want to salute our six Chairmen. They have done a remarkable job. Adam Schiff is holding forth now.

Chairman Cummings, let me say a word about him. Chairman Cummings is an expert on Inspectors General and on whistleblowers. So, in addition to all of the other oversight responsibility that his Committee has over all of government, in this particular case he has been a great intellectual resource on it.

Mr. Nadler is a master of the Constitution.

Congresswoman Waters, a strategic thinker and has her case before the courts now in the Deutsche Bank case, along with Mr. Schiff, in that case.

Chairman Neal, with his case in the courts on the President’s taxes.

Mr. Engel, part of the Foreign Affairs Committee, which has jurisdiction in terms of this telephone call, as well.

But, it is an intelligence matter, and it is focused in the Intelligence Committee.

So, here we are with another example of violations of the Constitution on the part of the President. A continuing discussion that we’ve been having with him, and I was very pleased that the Senate voted to reverse their decision to take $3.6 billion from military construction and spending it on his wall. We will have that vote [tomorrow] for the reversal of that decision.

So, as we go forward and still continue with our day‑to‑day work, yesterday, we had a big rally. We all wore black to mourn those who have been lost to gun violence. We asked the President to pay attention to that.

I pray for him and his family and their safety. I also pray that he cares about the safety of other people’s families in our country.

In the first 200 days, and now it’s more, of this Congress, we’ve passed very significant legislation, consistent with our promise to the American people in last year’s campaign For The People agenda: to lower the cost of health care by lowering the cost of prescription drugs, to increase paychecks by building infrastructure of America in a green way, cleaner government. Well, on the first two, prescription drugs and infrastructure, hopefully we can have some bipartisan cooperation. Cleaner government, I don’t think so, but we will persist with that.

So, again, with all of the agenda that we have sent over to the Senate, we would hope – we would hope that they would listen to the people where over 90 percent, 90 percent of the American people support commonsense background checks contained in H.R. 8 that is over there. That list goes on.

So, we are doing our work. We are legislating for the good of the American people in a way that tries to find common ground. We are investigating, as is our responsibility. We are litigating. And now, we have no choice but to ask for an impeachment inquiry, based on the President’s actions.

Some snippets from the presser (bolding added):

Q: [The DNI testified that he] had delayed the release of the whistleblower complaint because it was such a unique animal here. He says there was good reason why he did that. Based on your background in intelligence and crafting the DNI statute, is that acceptable to you?

Speaker Pelosi. No. I think what the DNI did was broke the law.

The impeachment inquiry will not be just about Ukraine:

And, the whole emoluments issue is not a cover‑up, that’s self‑evident. But, a lot of it still contributes to the idea that the President believes that he is above the law. The law being the Constitution of the United States, which strictly forbids a President from accepting an emolument from a foreign government. And now, he’s asking a foreign government to help him in his election.

No rest for House staffers and key committee members.

This is a sad time for our country. It has been a somber and prayerful time for all of us. None of us has come to Congress to impeach a president. All of us came to uphold the oath we take to support and defend the Constitution. Democrats and Republicans alike must always put country over party, especially now. I have always said that any decision we make would be based on a review of the facts and the oath that we take. I have also said that when the facts warranted it, we would be ready to proceed.

Sadly, the facts revealed in the past week have warranted an impeachment inquiry. In his telephone call with the President of Ukraine, the President showed a disregard for our national security, for the integrity of our elections and for the oath of office to preserve, protect and defend the Constitution.

I thank the Chairmen and all Members of our Caucus for their thoughtful consideration of the decision that we needed to make. The path forward will be centered in the Intelligence Committee led by Chairman Adam Schiff. I commend him and the Members who will be working over the District Work Period to continue to advance this inquiry.

This is a matter of national security. As a group of 300 leading former national security experts who served under Republican and Democratic Presidents wrote today, “President Trump appears to have leveraged the authority and resources of the highest office in the land to invite additional foreign interference into our democratic processes. That would constitute an unconscionable abuse of power. It also would represent an effort to subordinate America’s national interests – and those of our closest allies and partners – to this President’s personal political interest… Having worked across administration of both parties to uphold and advance those national interests, we consider the President’s actions to be a profound national security concern.”

This is also a matter of the Constitution and the integrity of our elections. The whistleblower complaint, which the Intelligence Community’s Inspector General determined to be both of “urgent concern” and “credible,” warns that the President’s actions “pose risks to U.S. national security and undermine the U.S. Government’s efforts to deter and counter foreign interference in U.S. elections.” Further, Acting DNI Maguire testified that “the greatest challenge that we do have is to make sure that we maintain the integrity of our election system,” and that “protecting the sanctity of our election within the United States, whether it’d be a national, city, state, local is perhaps the most important job that we have [within] the intelligence community.”

With our inquiry in place, we can focus on promoting our For The People agenda. We promised in the campaign that we would lower health care costs by reducing the price of prescription drugs, and I encourage all Members to have conversations with constituents about H.R.3: The Lower Drug Costs Now Act. I thank our Chairmen, Frank Pallone, Richie Neal and Bobby Scott, for their leadership in bringing this transformative legislation forward. The District Work Period Packet contains helpful information for communicating our message on this key legislation For The People.

The Chair of our Caucus has arranged a series of conference calls over the District Work Period, and I will be in regular touch with Members during this period. Please call me at any time.

Thank you for your patriotism and leadership.