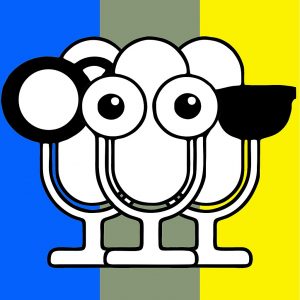 Logo from a Portuguese podcast, because pod people are everywhere.

I’m not technology-averse, but neither I am a first-adopter. I had a flip phone long after everyone else had moved on to smartphones, and I didn’t add texting to our phone package until 2009, when the Kiddo begged and pleaded with me, using the rationale that her work study boss expected to be able to contact her via text. (I still don’t know if that was true, but she got extra credit for creative persuasion, which tipped the balance to a yes on text capability.)  Part of my reasoning for waiting until new tech isn’t new is that I want to wait until the cost of the technology comes down; part of it is a show-me-why-it’s-better attitude; and yes, some of it is resistance to change.

But sometimes that change is forced upon you. When I recently got my new-to-me car, it came without a CD player but did have bluetooth. I rarely listen to the radio, so my music choices had always been dependent on which CD I pulled from the stack in my center console. Without a CD player and with no intention of keeping Sirius radio once my complimentary trial ran out, I was faced with a dilemma. I immediately consulted my personal tech gurus (Kiddo and SIL), and they had two immediate solutions. They added me to their Google music subscription, so I could stream whatever music I wanted. In addition to that, they suggested I might want to add podcasts to my listening choices. Of course, I was aware of the existence and popularity of podcasts, but I had never listened to one. Directed to a podcast app (they suggested Podcast Addict), I was able to search by categories, by what was new or trending, and even for free audiobooks. It was a revelation. I know there are a number of you thinking, “Oh, Do, you really need to start living in the 21st century,” but I bet there are also a few of you who are thinking that maybe now is as good a time as any to explore podcasts. Below are some of my current favorites; please add any of yours in the comments.

Shedunnit: “The podcast that unravels the mysteries behind classic detective stories.” Written, hosted, and produced by Caroline Crampton.
This scripted podcast, with a new release once every two weeks or so, features relatively short episodes (usually about 35 minutes) inspired by the Golden Age of Mysteries. Whether discussing socio-cultural influences that would have impacted a Sayers, a Christie, or an Allingham, or exploring true crime stories whose elements show up in books by the Queens of Crime, Crampton finds a new, engaging story every time. Some of her initial inspiration came from the book, The Golden Age of Murder by Martin Edwards, the current president of the Detection Club (founded by leading detective novelists of the 1930s). If you think podcasts are not your thing, but Golden Age mysteries are, I definitely recommend the book.

1619: A component of the New York Times Magazine’s 1619 Project. Narrated by Nikole Hannah-Jones.
This is a new podcast with one short introductory and to date, four full-length, episodes. Like the print release, the history presented by Hannah-Jones is the history of slavery reexamined and reconsidered. For me, the best part of each podcast is Nikole Hannah-Jones blending of her own personal stories with the history she is narrating; she’s a thoroughly engaging and compelling storyteller. Despite that, I think my favorite episode so far has been episode three, The Birth of American Music, with guest narrator Wesley Morris of the New York Times.

“The proliferation of black music across the planet — the proliferation, in so many senses, of being black — constitutes a magnificent joke on American racism,” Wesley Morris writes. (The Birth of American Music)

Ohio v. The World: Ohio history with in-depth interviews and deep dives into history, both well-known and obscure, with a touch of current events. Researched and narrated by native Ohioan and attorney, Alex Hastie.
This may seem like a strange podcast for someone living in Michigan, but I was born and raised in Ohio. Back in the day, the entirety of 8th grade history was Ohio history, and the indoctrination has never quite lost its grip. This podcast was recommended to me by a random person on Twitter, and I’ve only listened to one episode (of 49), but what a glorious episode it was. In the very first episode, Ohio v. The Nixon Administration, Hastie presents the events leading up to and including May 4, 1970 at Kent State. I lived in Ohio in 1970 (7th grade), but my awareness was very much tainted by the government and press bias in favor of the Guard actions that day. Although I remember being extremely shocked and upset at the deaths, it was this podcast that filled in some of the human blanks that weren’t reported at the time. Hastie’s podcast lacks some of the polish of other shows, but he packs a punch. Longer than many podcasts (the Kent State episode is one hour, ten minutes), they’re a full meal; even if Ohio history doesn’t whet your appetite, I urge you to consider at least listening to Ohio v. The Nixon Administration.

The Report: A podcast series from Lawfare, with Susan Hennessey and Benjamin Wittes as narrators. A serialized narrative podcast telling the story of the Mueller Report.
The Mueller Report is 448 pages. It’s not an easy read (I’ve set it aside for now), and between the redactions and the dry writing style, it’s a slow slog. Lawfare recognized this. Rather than doing a live reading, The Report approaches the Mueller document as a series of interconnected vignettes that, when strung together, create a fascinating and understandable (if ugly) story. This not drama for drama’s sake, nor is it a political screed against 45*. It is very much a “just the facts” approach, but it makes the facts accessible, and the law more so. What this podcast does best is untangle the timeline and the various threads of the legal story and create a focused tapestry of corruption. If you feel like you should read the Mueller Report, but shudder at the thought, this podcast is the way to go.

Still to be explored: Call Your Girlfriend
Call Your Girlfriend is on my list of someday-podcasts. The premise is simple: two women, who are long distance friends, have a weekly, unscripted, free-ranging conversation, and we’re invited to listen in. Although it is unscripted, there is an agenda outlined at the beginning of each episode; one episode in 2015 billed its 45 minute conversation as, “…discuss why women should never have a candy dish at work, public radio voice and vocal insecurity, celebrities revolting against the red carpet, and Kanye and Taylor showing a little shine theory.” More recent episodes seem to be more focused on single topics, but those topics are still drawn from the full range of the female experience.