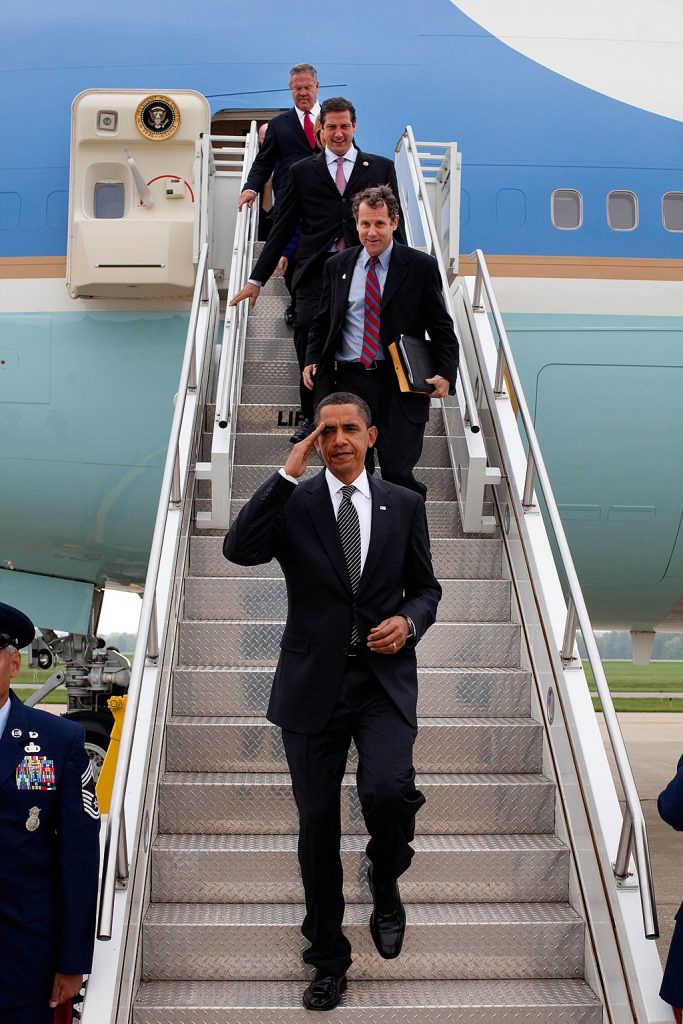 President Barack Obama salutes while walking down the steps of Air Force One as he arrives in Youngstown, Ohio, to attend a roundtable event with auto workers at the GM Lordstown Assembly Plant, Sept. 15, 2009. The Lordstown plant was closed March 6, 2019 after 52 years of operation.

As a kid growing up in Cleveland, I was aware, even hyper-aware, of any UAW strikes against the automakers. Maybe it was because we got the newspaper delivered everyday, and it was hard to miss the updates. Maybe it was a Midwestern thing and the proximity to so many auto plants. Or perhaps it was because my mother’s cousin worked at the Lordstown plant and was loud and proud in his support of the UAW. Whatever the reason, a strike was a big deal, and the strikes were seen, heard, and discussed whenever they happened. I no longer feel like that’s the case. Even here in Michigan, it doesn’t seem like the current strike against GM is garnering much attention except in UAW families. That’s probably a statement about the decline of auto manufacturing in the state, as well as the decline of unions in general. But this is an important strike, with the very real possibility of being of historical importance. So today it’s going to be seen, heard, and maybe even discussed.

How long has this been going on?

General Motors has lost $660 million so far since the start of the United Auto Workers union strike, according to a Michigan research firm specializing in the auto industry. The strike has entered its fourth week, with no immediate end in sight. https://t.co/7bnmzUQQXp

And how’s it going?

When the @UAW sends out a letter like this, its a pretty bad sign that this strike won’t try to end anytime soon.

GM is trying to bust the UAW and the media is letting GM get away with it.

Auto workers make a ton of money. How hard can line work be? Why should anyone care about their “cause”?

Hello, there is your unroll: Thread by @samdylanfinch: “As UAW strikes loom — not just for GM, but the big three as a whole — I need people to understand what these unions are […]” https://t.co/RQZCssdT6Z
See you soon. 🤖

Note the management claim. Then ask yourself why they couldn’t include the union in the decision-making/planning to reach that goal?

GM makes another offer to UAW after union said talks had soured https://t.co/jsYFudmfLE via @freep

Remember, everyone! You get what you vote for..#UAW workers on strike in Michigan wonder: Where’s Trump? https://t.co/z9vCdlIyn2#unionyes #unions #GM #GMstrike #tRump #impeachtRump #Impeach

Let’s be clear: over the long term, this is a complex situation. But let’s also understand that the top-down structure of GM doesn’t give the UAW any reason to accommodate the corporation any further than they already have (see the 2009 bankruptcy).

Highlight: “It really seems to be a big deal for GM that they do not want to make it easier for these temp workers to come onto full time status,” @rickjnewman says on the UAW rejecting the latest proposal from General Motors. https://t.co/xpAujlCWBd pic.twitter.com/dYJDB8Y2bI

Just a note: I’ll be hit or miss in my presence today. I’m still not feeling 100%, and I have to get in a postponed-too-many-times-already trip to the unemployment office.