Presidential candidate and California Senator Kamala Harris spoke at the Iowa Democratic Party’s Liberty and Justice Celebration this past week. She clearly laid out what the stakes are for 2020 and urged us to fight back – alongside her.

To win, we are going to have to fight against those who have been trying to push hate and division among us and have Americans turn on each other.

To win, we’re going to have to fight for what I know in my heart and in my soul to be true — which is in the beauty and diversity of who we are as a nation, we all have so much more in common than what separates us.

It is time that we fight. And this is a fight that is about all of us. 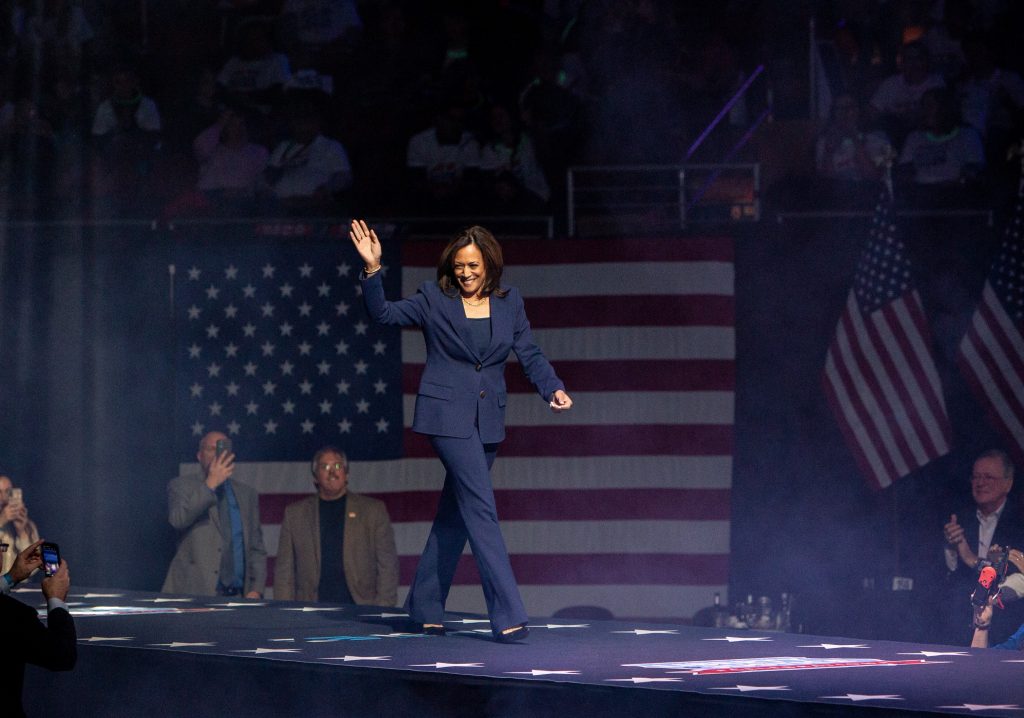 Transcript: Justice Is On The Ballot: Kamala Harris’ speech at the Iowa Democratic Party’s Liberty and Justice Celebration

Good evening, Iowa! So we all know why we are here. We are here because this is a moment. This is a moment where we have to be prepared to fight for the best of our country.

This is a moment where we need to fight for this country we love, for the rule of law, for our system of justice, and for our very democracy. So we are all here to fight. We’re all here to fight to end that national nightmare called Donald Trump. And to win, Democrats. To win.

It can’t be about anything other than looking at the future. It can’t be about looking at yesterday; we need to be focused on tomorrow. To win, we are going to have to fight against those who have been trying to push hate and division among us and have Americans turn on each other.

To win, we’re going to have to fight for what I know in my heart and in my soul to be true — which is in the beauty and diversity of who we are as a nation, we all have so much more in common than what separates us.

In fact the first time I walked into a courtroom, I spoke five words. ‘Kamala Harris, For the People.’

And it was for the people that a large part of my early career was about fighting against those who molested children and raped women — because it was about saying that those survivors deserved justice and a voice that gave them safety without judgment. For the People.

When I was elected District Attorney of San Francisco, saying that the war on drugs was an abject failure — so I created national models about what it means to give jobs to people who are arrested for drugs. For the People.

And for the people, as the United States Senator, it meant taking on Jeff Sessions. Taking on Bill Barr. And taking on Brett Kavanaugh.

And, Iowa, I stand here before you today, for the people, fully prepared to defeat Donald Trump. And that is why I am running: For the People.

So I am running for president to pass the largest middle-class tax cut we have had in history. And you want to know how we are going to pay for it? On day one, we’re going to repeal that tax bill the benefits that top one percent and the biggest corporations in America.

To care for all. To bring down costs. And to ensure that you also get choice. Because I heard from folks that said, ‘Do not take away my opportunity to have a private plan.’ So you will get a private plan or public plan depending on your choice.

When we are looking at teachers across America, and in Iowa, holding down two or three jobs to get through the end of the month. Education justice is on the ballot.

So I’m running for president to put into place what will be the first in our nation’s history federal investment in closing the teacher pay gap. Here in Iowa, that will be $12,500 per year.

When all over America, women are being attacked for their constitutional right to make decisions about their own bodies. Reproductive justice is on the ballot.

So I am running to ensure every woman will have her legal and constitutional right — and not these out of date Republican legislators telling women what to do with their bodies.

So I am running for president to take executive action, if necessary, and implement what people who have failed to have courage have not done — which is take on the gun lobby in Washington, D.C.

And I want to give a shout out to Beto. Because he had the courage to say, look, you cannot walk around talking about gun safety but not have the courage to figure out how you’re going to take five million assault weapons off the streets of America.

Justice is on the ballot.

So it is time that we fight. And this is a fight that is about all of us.

Please join me and caucus with me in Kamala’s corner. Thank you.

(From Kamala Harris’ Medium account, all bolding and emphasis from the original)

6 comments for “Fighting Back: “Justice is on the ballot””