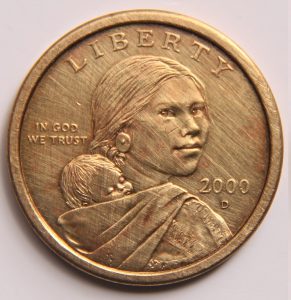 As much as I enjoy writing about history, I am always aware that I am a white woman who, whether intentionally or not, will always center whiteness. On the occasions I write about African-American history or individuals, I most often do it from the perspective of pointing out what white supremacy has erased, not because I claim to have any particular insight into the personal experiences of African-Americans in this country. This is also why it’s unlikely I will ever write about the history of the Indigenous in the now-United States. White supremacy has erased so much that I wouldn’t even know where to start; worse, it’s quite likely I would make missteps without even realizing it. In general, I am quite willing to stick with listening and learning from others. In light of that, today’s post is a bit outside of my comfort zone, particularly since it is 100% reliant upon U.S. government sources. I write it not to applaud the lawmakers who passed Public Law 110-82, nor the people who are implementing it. I write it as a reminder that White erasure of Natives has been so thorough, so complete, that the smallest government efforts to unerase history can be viewed as noteworthy, and at the same time, as further evidence of the vested interest the U.S. government has in controlling the historical narrative.

The coins to be released by the U.S. Mint are geared towards collectors but are legal currency. The “heads” side of all the coins is the Sacagawea design introduced in 2000; the “tails” sides feature the new Native American/tribal designs. The act suggested several designs to be used, along with the guidance that the coins would represent persons and/or events as close to historical, chronological order as possible.

The designs selected
for the reverse of the coins described under this subsection—
‘‘(i) shall be chosen by the Secretary after consultation with the Committee on Indian Affairs of the
Senate, the Congressional Native American Caucus of
the House of Representatives, the Commission of Fine
Arts, and the National Congress of American Indians;
‘‘(ii) shall be reviewed by the Citizens Coinage
Advisory Committee (110-82)

Spread of Three Sisters Agriculture (1000 A.D.) [The significance of the three sisters of corn, beans, and squash in Native agriculture] 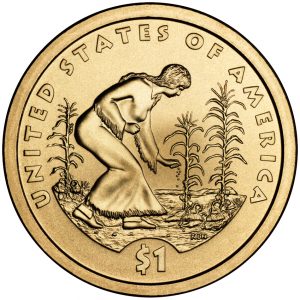 Three Sisters as featured on the reverse of the 2009 Native American U.S. dollar coin. 2009 reverse by Norman E. Nemeth. 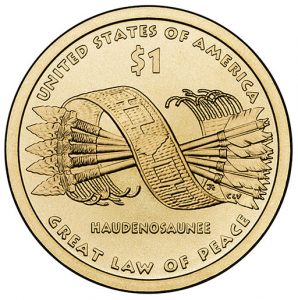 An image of the Hiawatha Belt with 5 arrows bound together.

2011
Supreme Sachem Ousamequin, Massasoit of the Great Wampanoag Nation Creates Alliance with Settlers at Plymouth Bay (1621) [The treaty that helped create the mythology of Thanksgiving] 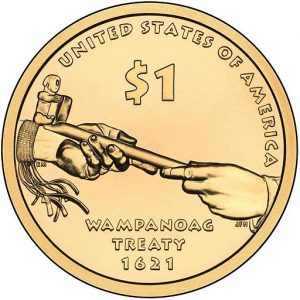 The hands of the Supreme Sachem Ousamequin Massasoit and Governor John Carver, symbolically offering the ceremonial peace pipe after the initiation of the first formal written peace alliance between the Wampanoag tribe and the European settlers. 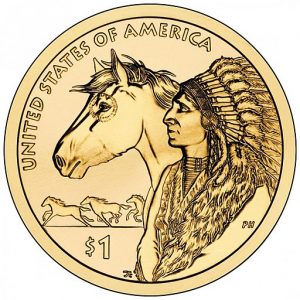 Native American and horse in profile with horses running in the background, representing the historical spread of the horse.

2013
Delaware Treaty of 1778. [After declaring independence, the United States signed its first formal treaty with an Indian tribe, the Delaware, at Fort Pitt (now Pittsburgh, Pa.) on September 17, 1778.] 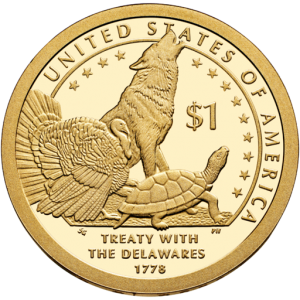 The design features a turkey, howling wolf and turtle (all symbols of the clans of the Delaware Tribe), and a ring of 13 stars to represent the Colonies.

2014
Native American hospitality ensured the success of the Lewis and Clark Expedition. [Success of the mission depended on help from the Indian tribes, who might not have understood the long-term consequences of their hospitality. ] 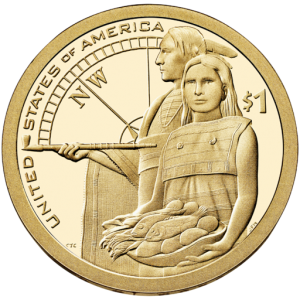 Native American man offering a pipe while his wife offers provisions of fish, corn, roots and gourds. In the background is a stylized image of the face of William Clark’s compass highlighting “NW,” the area in which the expedition occurred.

At this point, you’ve either figured out my ulterior motive in writing this post the way I have, or you’re wondering why I got so lazy and just provided links to the historical details. What I started realizing as I read about the various Native American events and people was, that for me, it was almost all new. The erasure of Native culture and history has been so complete for me that I wanted to visually represent that; I suspect that I am not alone in being unaware of the details hidden behind the links. Additionally, I didn’t feel altogether comfortable laying out the U.S. Mint explanations as actual history. Although I think most of the entries held an undercurrent of recognition of the negative impact colonizing has had on Native culture, the fact that it wasn’t stated outright was disturbing to me.