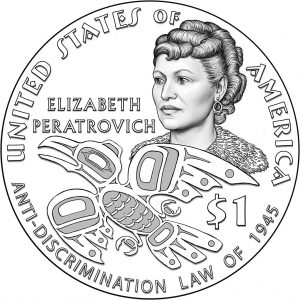 The design features a portrait of Elizabeth Peratrovich, whose advocacy was considered a deciding factor in the passage of the 1945 Anti-Discrimination Law in the Alaskan Territorial Government. The foreground features a symbol of the Tlingit Raven moiety, of which she was a member.

For most of us (and yes, there are some notable Village exceptions), the story of Alaska and its First People is a story sketched in the broadest outlines and with little detail. Most of us have heard the designation “Seward’s Folly,” the derogatory description of the 1867 “purchase” of Alaska from the Russian Empire. We may have some basic understanding of the gold rush in the Klondike in 1896. Most of us have heard of the Iditarod, and the story of Togo and Balto and the sled dog relay to save the children of Nome, which inspired the current race. But I feel relatively confident that most of us, unless having spent some time in Alaska, know very little about the indigenous peoples and how they fared when Americans came to colonize their land. Not surprisingly, it’s a story of white supremacy and today, it’s also the story of a Native woman who said, “Enough.”

Under the treaty ceding the Russian possessions in North America, concluded March 30, 1867, and ratified May 28 of the same year, Alaska was sold to the United States for $7,500,000 in gold. Under this treaty all inhabitants who did not reserve their natural allegiance to Russia, with the exception of members of uncivilized native tribes, were “admitted to the enjoyment of all rights, advantages, and immunities of citizens of the United States.”

…Although the Russian-American transaction was official, the transition for Alaskan Natives was a painful one. Utilizing the federal courts to seek justice proved futile for the Native people. Finally, in 1897, a petition from the Tlingit Orthodox Chiefs to the President of the United States pleaded for relief from barbaric treatment brought on by Presbyterian missionaries and government officials. Another petition was sent to the Imperial Russian Ambassador in Washington D.C. from Sitka’s Orthodox residents. These appeals were written in both Russian and English, their names signed in Cyrillic Russian alphabet. When the Russian-American treaty was written, the word “civilized” unfortunately was not defined, and Natives who had previously enjoyed the freedoms of citizenship went unrecognized as American citizens. Their pleas went unheeded. (A Recollection of Civil Rights Leader Elizabeth Peratrovich 1911-1958)

Elizabeth Wanamaker was was a member of the Lukaax̱.ádi clan, in the Raven moiety of the Tlingit nation. She was orphaned at a young age and adopted by Presbyterian missionaries. When she was 13, the U.S. Congress passed a nationality law that declared that granted citizenship to Natives, but citizenship did not mean equality. Whites resisted recognizing Native rights, routinely claiming Natives could not fish in waters that were their traditional fishing grounds; that First Peoples could only attend “Indian schools”; businesses had “No Natives allowed” signs; and restaurants even advertised that they only had white help. After marrying Roy Peratrovich in 1931, Elizabeth and Roy eventually moved to Juneau, where the discrimination was far worse than anything Elizabeth had previously experienced. Her husband was the Grand President of the Alaska Native Brotherhood (ANB), an activist organization for Native civil rights; Elizabeth assumed the role of Grand Vice President of the Alaska Native Sisterhood (ANS). After the attack on Pearl Harbor, the Peratrovich’s sent a letter to the governor of Alaska on behalf of the ANB and the ANS. It said, in part:

My attention has been called to a business establishment in Douglas, namely, “Douglas Inn,” which has a sign on the door which reads, “No Natives Allowed.”

In view of the present emergency, when unity is being stressed, don’t you think that it is very Un-American? We have always contended that we are entitled to every benefit that is accorded our so-called White Brothers. We pay the required taxes, taxes in some instances that we feel are unjust, such as the School tax. Our Native people pay the School tax each year to educate the White children, yet they try to exclude our children from these schools.

In the present emergency our Native boys are being called upon to defend our beloved country, just as the White boys. There is no distinction being made there, but yet when we try to patronize some business establishments we are told in most cases that Natives are not allowed.

…We were shocked when the Jews were discriminated against in Germany. Stories were told of public places having signs, “No Jews Allowed.” All freedom-loving people in our country were horrified at these reports, yet it is being practiced in our country.

We, as Indians, consider this an outrage because we are the real Natives of Alaska by reason of our ancestors who have guarded these shores and woods for years past. We will still be here to guard our beloved country while hordes of uninterested whites will be fleeing South. (Letter to Ernest Gruening, December 30, 1941)

Governor Gruening was sympathetic and had himself been working to combat discrimination in conjunction with the ANB and the ANS. He met with both Elizabeth and Roy to work on language for an anti-discrimination bill, and Elizabeth mobilized friends and family to start lobbying Alaskan legislators before the legislature went into session. Legislation was prepared for the 1943 session; Gruening’s bill was defeated in the Alaskan Senate (with a tie vote); a more comprehensive bill was introduced in the House and went down to defeat by a vote of 9-7. The vote was a setback, but the Peratrovichs didn’t quit. Because the Alaskan legislature only met every other year, they had two years to mobilize Natives; the 1943 legislature had passed a law to increase the number of legislators, so voting for new and additional representation was critical to future civil rights. Elizabeth traveled across the territory, sometimes by plane and sometimes by dog team, to get out the vote and to urge Natives to run for office.

In 1945, the anti-discrimination bill was introduced again and handily passed the House 19-5. The Senate was another story.

When it came up in the Senate, a two-hour discussion followed where it was violently opposed by Allen Shattuck. “Far from being brought closer together, which will result from this bill,” he said, ” the races should be kept further apart. Who are these people, barely out of savagery, who want to associate with us whites with 5,000 years of recorded civilization behind us?” (A Recollection of Civil Rights Leader Elizabeth Peratrovich 1911-1958)

Roy Peratrovich was asked by a senator to testify about discrimination against Natives and to speak about the bill on behalf of Natives. He spoke simply, yet eloquently, pointing out that you are either for discrimination or against it. Elizabeth, now president of the ANS, was sitting in the gallery, observing the debate while knitting; she did not speak until it became time for community input.

“I would not have expected,” Elizabeth said in a quiet steady voice, “that I, who am barely out of savagery, would have to remind gentlemen with five thousand years of recorded civilization behind them of our Bill or Rights. When my husband and I came to Juneau and sought a home in a nice neighborhood where our children could play happily with our neighbors’ children, we found such a house and had arranged to lease it. When the owners learned that we were Indians, they said ‘no.’ Would we be compelled to live in the slums?” Her intelligence was obvious, her composure faultless. After giving a potent, neatly worded picture of discrimination against the Indians and other Native people, Mrs. Peratrovich said, “There are three kinds of persons who practice discrimination. First, the politician who wants to maintain an inferior minority group so that he can always promise them something. Second, the Mr. and Mrs. Jones who aren’t quite sure of their social position and who are nice to you on one occasion and can’t see you on others, depending on who they are with. Third, the great superman who believes in the superiority of the white race.” Discrimination suffered by herself and her friends, President Peratrovich told the assembled body, “has forced the finest of our race to associate with white trash.” There was an awesome silence in the packed hall, you could hear a pin drop.

Asked by Senator Shattuck if she thought the proposed bill would eliminate discrimination, Elizabeth Peratrovich queried in rebuttal, “Do your laws against larceny and even murder prevent those crimes? No law will eliminate crimes but at least you as legislators can assert to the world that you recognize the evil of the present situation and speak your intent to help us overcome discrimination.” (A Recollection of Civil Rights Leader Elizabeth Peratrovich 1911-1958)