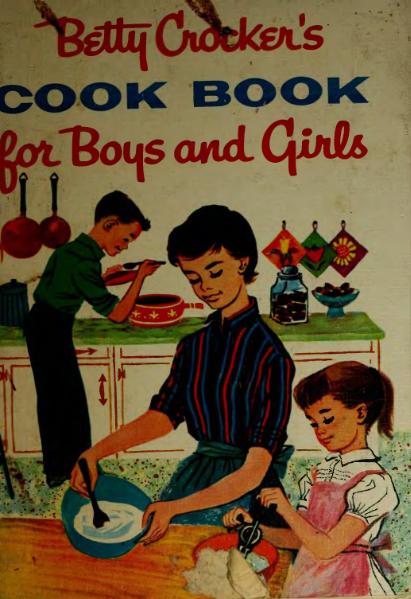 We had this when I was a kid; unfortunately, my cooking skills never advanced much beyond this level.

Aphra Behn, who some might remember for her stellar Herstory posts and her involvement with the old Hillary News and Views days, tweeted this yesterday:

Here is something interesting about food, history, and identity. https://t.co/tjq3ILaprJ

It’s a fascinating story, and it also reminded me a bit of part of the premise of Michael Twitty’s, The Cooking Gene, which I’m currently reading.

The Cooking Gene is about the influence that the enslavement of Africans by European settlers has had on foodways and history of the Old South. The Cooking Gene includes personal narratives, history, recipes, and folk songs. The recipes have African, Native American, and European roots as the author integrates his Jewish faith into African-American cooking. Twitty emphasizes the African flair that has been added to European and Native American ingredients by African American cooks. Additionally, he discusses plants used in cooking that are native to Africa such as sesame, okra, and sorghum. The Cooking Gene)

We don’t really have any food stories or food legacies in my family.  Part of that is because my grandmothers’ recipe boxes were either lost or thrown out when they passed away.  Part of that is because the food heritage from Germany and/or England/Scotland is not all that distinctive (as compared to other Western European countries), so even if I have a heritage, I probably wouldn’t recognize it.  And part of it is because my immigrant ancestors were so focused on assimilation that retaining a heritage (beyond Whiteness) was not a priority.  I can recognize more recent influences:  the Depression on the cooking of my grandmothers and mother; the 1950s with the introduction of convenient (AKA processed) foods; WWII on the food my mom was “allowed” or “not allowed” to set before my dad.  My dad was more of a feminist than my mom ever was, but that didn’t stop him from decreeing that no lamb should ever be cooked in our home; the smell reminded him of the mutton he ate during the war, and that triggered other memories.

Despite the lack of stories or recipes, I’m still capable of appreciating food.  So when I realized that Aphra’s tweet was going to lead to a post, I decided that for the holidays, it was time to go back and dig out some of her anti-troll recipes.  As a Village, we never got around to gathering all of her/our recipes in one place, but I wanted to share some of those that would make tasty holiday and New Year fare.  So major h/t to Aphra for writing today’s post.

Speaking-of-Balls Peanut Butter Balls (from the October 13, 2016 HNV)
And an anti-troll recipe:

Stir together powdered sugar, peanut butter and butter until well mixed.
Shape peanut butter mixture into 1 inch balls, placing them on a baking sheet covered with waxed paper.
Let balls stand for 20 minutes until dry.
Melt the dipping chocolate or confectioners’ coating.
Drop balls one at a time in melted chocolate.
Using a fork, remove from the chocolate, letting excess chocolate drip off.
Place back on the waxed paper.
Let stand until dry.
Store tightly covered in a cool dry place.

Pumpkin Quesadillas (from the September 29, 2016 HNV)
And a recipe against trolls: PUMPKIN QUESADILLAS

Stir pumpkin and cumin in large bowl; season. Spread over 4 tortillas. Sprinkle with cheese and nuts. Top with remaining tortillas. In large skillet, heat 1 tbsp. oil over medium-low. Cook quesadillas 1 at a time, turning once and adding more oil between batches, until browned, 3 minutes. Cut into wedges and serve.  For the gluten-sensitive, corn tortillas can be used instead of flour tortillas.

And a recipe against trolls

Place each chicken-breast half between 2 sheets of wax paper and pound with a meat mallet until about ¾ inch thick. Heat the oil in a large skillet over medium-high heat. Sauté the chicken until golden, about 3 minutes per side. Add the apple slices, apple juice, onion, garlic, thyme, ½ teaspoon salt, and ⅛ teaspoon pepper. Simmer, covered, 6 to 8 minutes or until chicken is fork-tender.Remove the chicken, apple slices, and onion to a serving platter and keep warm.Bring the sauce to a boil for about 5 minutes or until slightly reduced. Whisk in the mustard. Pour the sauce over the chicken.

Tradition Isn’t Just A Song in Musical Canadian Butter Tarts (from a September 9, 2016 post entitled, “What are the Canuck’s Going to Do About North Korea?” by mallard)

Preheat oven to 425 degrees F (220 degrees C). Place tart shells on a baking sheet; sprinkle raisins evenly into the bottom of each tart shell.
Whisk together butter, brown sugar, maple syrup, vanilla extract, and salt in a bowl; whisk in egg. Pour mixture into tart shells; sprinkle each tart with walnuts.
Bake in the preheated oven until pastry is light brown and filling is bubbly, about 12 minutes.

*If you dislike either raisins or nuts, you may leave either one out. If desired, dried currants may be used instead of raisins, and/or pecans in place of walnuts.

*You may also use unbaked pie crust in place of tart shells: line greased muffin tins with pie crust rounds cut from a wide-mouthed glass.

*Do not overfill crusts; filling tends to bubble over easily.

And a recipe against trolls:

cup white sugar
1/2 cup butter
2 eggs
2 teaspoons vanilla extract
1 1/2 cups all-purpose flour
1 3/4 teaspoons baking powder
1/2 cup milk
Preheat oven to 350 degrees F (175 degrees C). Grease and flour a 9×9 inch pan or line a muffin pan with paper liners.
In a medium bowl, cream together the sugar and butter. Beat in the eggs, one at a time, then stir in the vanilla. Combine flour and baking powder, add to the creamed mixture and mix well. Finally stir in the milk until batter is smooth. Pour or spoon batter into the prepared pan.
Bake for 30 to 40 minutes in the preheated oven. For cupcakes, bake 20 to 25 minutes. Cake is done when it springs back to the touch.

(My apologies, bfitz, for not providing more GF recipes, but I was just using what Aphra had provided.)