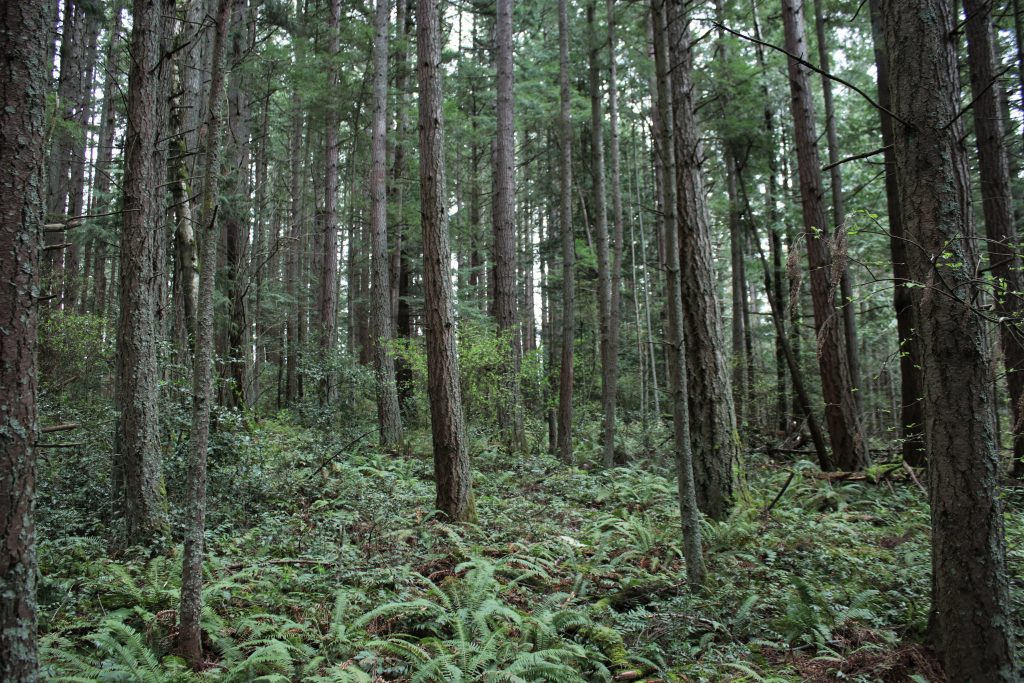 Trees seem to be gregarious as most tend to live and thrive in communities that we call forests. Some forests are mostly of a single species while others are mixed with a variety of species. In either case, they tend to live in various partnerships interacting and supporting one another on many levels.

Many of these intra and interspecies relationships are known today while many more are yet to be discovered.  In this and in a subsequent post I will describe and illustrate a few such partnerships that I see on a regular basis on my walks in the woods knowing full well that I observe only the most obvious ones. A caveat is in order here:  I am a rank amateur at forestry as a science or a profession. But the more I see and learn the more I appreciate the importance of trees, forests and their various relationships that contribute to their centrality in the great scheme of life on earth.

At the most basic level, one tree might literally physically support another such as keeping it from falling and being uprooted in high winds.  The photo below shows a tree that was partially uprooted but its fall was broken by its neighbor’s in close proximity. Even though some of its roots are pulled from the ground others remain to provide water and nutrients. Thanks to the forest, the tree continues to live and reproduce. 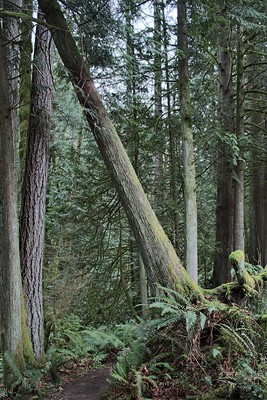 A would-be fallen cedar tree supported by a Douglas-fir

Although grafting limbs or trunks on to other woodstock is common in horticulture, similar processes can happen naturally when two individual trees or branches growing in close proximity begin to rub against one another. If continued, the bark can erode exposing each tree’s cambium. If their cambium comes into direct contact, they can self-graft and become conjoined or fused.  The process is called inosculation.

inosculation between a black cottonwood and a cedar tree

The literature says that inosculation occurs most often between same or similar species. However, in my limited experience, it is not rare for two rather unrelated trees to fuse as seen here between a deciduous black cottonwood and a conifer (cedar)

In other cases two trees might not actually graft to one another but retain a very close relationship such as Hugging Trees. These can be of the form of being intertwined with one another. (the original “tree huggers.”)

A couple of huggers, trunks entwined

And finally, some might just do both. Below  the two black cottonwoods appear to have started out intertwining and then fused.  I think these actually fused two times during their “romance”.

Another example of partnerships are the nurse logs and stumps. Here dead tree remnants provide a soft landing for seeds of another tree and with their decomposing bodies, supply nutrition for the new seedling until its own root system becomes established. Sometimes the log or stump as it often is, rots out from under the new tree. 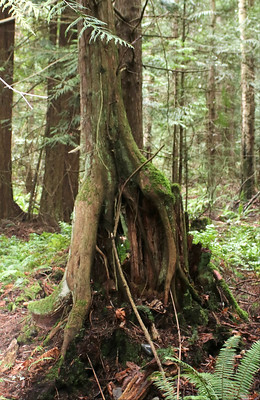 What it looks like when the nurse  stump deteriorates. It gets leggy but is alive.

We have all seen numerous trees with various branches coming off the main trunk. Sometimes they just seem to all of sudden branch into to two new trunks of roughly equal circumference. When this forking happens they are said to be co-dominant trunks.

Arborists identify two types of these co-dominant trunks. In some cases, additional bark grows at the junction where the trunks diverge. This bark builds up and becomes a sort of wedge between the two trunks, rendering the junction weak and prone to splitting. These are called “bark-inclusion” junctions and generally have a “V” shape at the junction.

Another more stable structure grows without the additional bark in the fork and forms in more of a  “U” shape These are less subject to splitting when under stress such as big winds.

I found another example of a co-dominant trunk structure that resulted in three trunks.

Following are some other oddities for which I have no name or am unsure how to classify as they do not appear to clearly fit these categories.  If there are other categories to classify these, please enlighten. Help is encouraged.

So there you have some tree to tree interactions that have caught my interest on my local walks. But as I noted at the beginning, other actors also come into play to keep the planet green. In the next diary I will address how animals and fungi contribute to keeping trees thriving so that they can continue to sequester the carbon dioxide that increasingly contributes to our climate warming.