No one in the Democratic Party knew more about Fighting Back than John Lewis. He will be sorely missed. 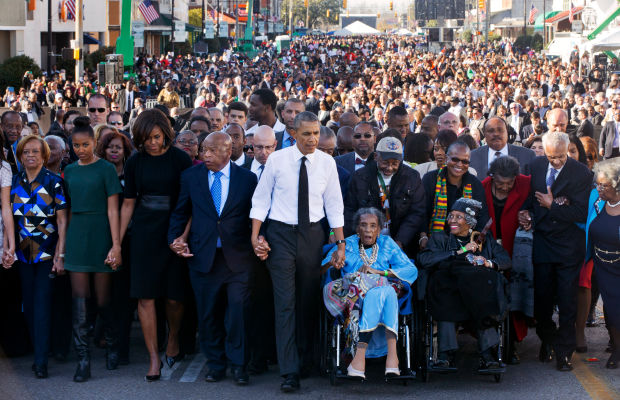 President Barack Obama on the passing of John Lewis:

America is a constant work in progress. What gives each new generation purpose is to take up the unfinished work of the last and carry it further — to speak out for what’s right, to challenge an unjust status quo, and to imagine a better world.

John Lewis — one of the original Freedom Riders, chairman of the Student Nonviolent Coordinating Committee, the youngest speaker at the March on Washington, leader of the march from Selma to Montgomery, Member of Congress representing the people of Georgia for 33 years — not only assumed that responsibility, he made it his life’s work. He loved this country so much that he risked his life and his blood so that it might live up to its promise. And through the decades, he not only gave all of himself to the cause of freedom and justice, but inspired generations that followed to try to live up to his example. […]

Not many of us get to live to see our own legacy play out in such a meaningful, remarkable way. John Lewis did. And thanks to him, we now all have our marching orders — to keep believing in the possibility of remaking this country we love until it lives up to its full promise.

Not many of us get to live to see our own legacy play out in such a meaningful, remarkable way. John Lewis did:https://t.co/KbVfYt5CeQ

Speaker Pelosi. Good morning. How are you all?

So much happening. Yesterday, it was two months since we passed The Heroes Act, as some of you are aware, who were with us as we observed that. Calling upon the President to activate the Defense Production Act so that we can get the equipment we need. The President has made so many bad executive decisions. We wish he would make a good executive decision and do that.

Observing his behavior, I have concluded that he is like the man who refuses to ask for directions. All of the answers are there. The scientists have the answers. We know that testing, tracing, treating, distancing, masking, sanitation can stop the spread of this virus. And yet, the President continues to go down the wrong path and refuses to ask for direction from scientists who know better than any of us.

So, again, we observed that it was two months. In that period of time, two million more people, two million more Americans have become infected, for a total of 3.5 million people infected. Since that time, 50,000 more people have died, for a total of over 137,000. Tens of millions of people are still out of work, and UI benefits expire soon. And today, we marked the seventeenth straight week – weeks of more than one million people filing for UI benefits. And we still don’t have the needed testing and PPE. And the President refuses to use the full power of the Defense Production Act needed for reopening: reopening our schools, reopening our economy and the rest.

So many people have said, ‘I’ve had a test, but it’s taken me at least a week, or sometimes two weeks, in order to get the results.’ You know why? Because there is not enough equipment. So many people have said, ‘I couldn’t get a test because I was not qualifying with a disposition, a pre-condition, whatever it is – an impending operation.’ You know why? Because there isn’t enough equipment. So why, for what reason does the President not fully implement the defense bill? And in hospitals and in places that are giving care to people, there is not enough PPE, personal protective equipment.

There is not enough equipment. But we could have it if the President exercised – executed the Defense Production Act. We called for it in the CARES Act. Yesterday, a number of our – not yesterday, the 14th, a number of our colleagues wrote to the Secretary of Defense and the Secretary of Health and Human Services and asked why. Why was the DPA not used in the way that was called for in the legislation? An assessment of the amount of each of the categories that we need: PPE, diagnostics, serologic and other COVID tests, treatment for COVID-19, other medical supplies and equipment. The list goes on.

This is such a massive dereliction of duty. People are dying. And so what we are saying to the Senate: join us in asking the President to use executive action for good instead of ill, as he has done, and pass The Heroes Act, which, as you know, supports our – but let’s just focus on what it would mean for our schools. Because across the country, the angst that people are reporting to us about the anxiety they have about the decision as to whether to send their children to school.

What does the President do? The negative. ‘We are not going to give you money unless you open up.’ No, you give people, schools, money to open up. And that is precisely what we do in The Heroes Act. We have a $100 billion Education Stabilization Fund specifically geared to the coronavirus.

We do have, in the going – the Moving Forward legislation that we passed, our infrastructure bill, we have another $100 billion for school construction. That was important even before coronavirus. It was about ventilation, it’s about wiring, it’s about getting rid of lead poisoning in the schools, it’s about meeting all the needs of our students.

We tell our children that education is important, that they must study for their own personal – to reach their own personal aspirations and for the good of our country. But we send them a different message when we send them to schools that are not wired with the technology for them to learn properly and modernly, when there is lead poisoning that makes them sick and diminishes their capacity to learn, when the ventilation systems are such that it exacerbates the situation. And now, all of that exacerbated by the coronavirus.

So if we add that – and then, of course, we have the resources to honor our heroes by supporting our state and local government. And much of what state and local government does is the education of our children. But they have had opportunity lost. Their revenue lost because of the coronavirus. Their revenue lost, their outlays of costs because of having to pay for coronavirus care, et cetera, has given them serious budget deficits. So let us honor our heroes by doing that. Let us open our schools and open our economy by testing, testing, testing, testing, tracing, treating, isolation.

These schools are saying that they should be six feet apart. That’s for sure. You’re going to need fewer people in the classrooms. They’re going to need more space, therefore you need more teachers. And the President is saying, ‘If you don’t open up, we’re going to deprive you of an eight-point-something percent that the federal government provides to schools in our country. State and local do over 90 percent of it, and we – and they have, again, serious budget deficits because of the coronavirus.

So, again, we need, we need – we need the DPA to open up schools, to open up the economy, to open up the economy. And we need to help America’s families. Actually, if you put it all together, in our two packages, we have $230 billion specifically for the schools. And then we have nearly $1 trillion for state and local governments, which I remind you is one half of what they gave away in their tax break; 83 percent of the benefits going to the top one percent.

As we urge the President and the GOP Senate to get on it and help the American people: help our state and local governments by honoring our heroes, open up our economy and our schools by having the equipment needed to do it and the funds to the facilitate that, put money in the pockets of the American people. The time is running out on that. This is drastic. I know we keep saying this over and over, but it still persists, and the clock is running out on it.

But as we urge them to do that, House Democrats are still working very hard for the people.

This week, the Appropriations Committee has been marking up the fiscal year 2021 legislation, putting us on track to have passed legislation to fund 96 percent of the government in July. The second time in two years we have been on schedule. We will pass those bills next week. They are being marked up this week and last week.

We’re holding nearly 30 hearings and markups as we are here now across committees, including Energy and Commerce markup yesterday, at this time, some of it yesterday; 30 health-related bills, and hearings on COVID relief and vaccine, pandemic preparedness, environmental justice in the era of COVID and much more. So we have a lot going on. We will be taking these votes to the Floor next week to be on schedule to meet the needs of the American people. And, again, the clock is ticking. The Unemployment Insurance will run out by the end of the month, even before the end of the month. We need to have the direct payments to people.

But on the subject of the kids, you know, I’m a grandmother and a mom – five kids, nine grandchildren, all ages. The youngest one is in public school in San Francisco. We are very concerned, not only for her, but for her classmates. They don’t all have all of the technology that would be needed for distance learning. All of them – many of them go to school for meals. Well, they go to school to learn, but they get their food there. And so with all the concern that we have for all children, we have to make sure all of that is in place. But that’s a situation that is replicated across the country. And so, instead of threatening schools, instead of the Secretary of Education saying ‘Children should take risks. Astronauts take risks.’ Oh, really? Oh, really?

So, in any event, this is personal. It’s about our children. And at the very least, the President could say we’re going to have the equipment necessary.