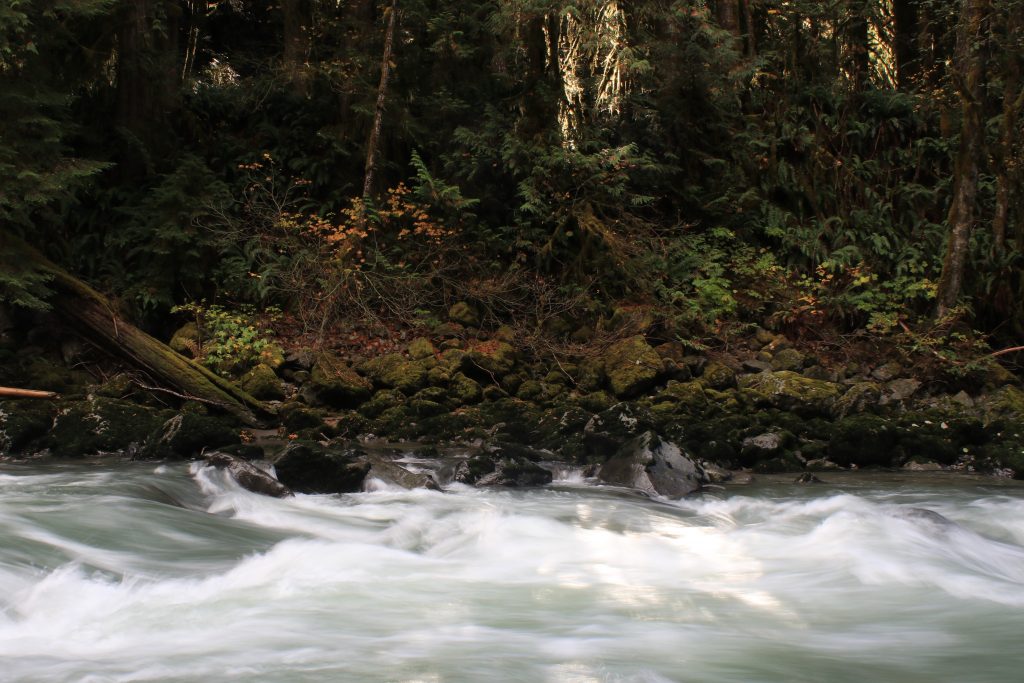 North Fork of the Nooksack River at Horseshoe Bend

During the last week of October and first week of November I took a couple of trips into the north Cascades Mountains as I am wont to do. But this time I stayed below the snow line and focused on the two beautiful rivers and their environs that were bedecked with dangling and fuzzy rain-forest-like mosses and lichens along with a little fall color. I chose two clear sunny days following substantial rains. Since there had not yet been any significant freezes at this altitude, the fungi were popping their caps up as well. My first trip was up and along the Nooksack River about which I’ve written previously. The second trip was up the Skagit River Valley. These two rivers and their namesake valleys drain from the North Cascades Wilderness Area and the North Cascades National Park and and the Mt. Baker — Snoqualmie National Forest to deliver their frigid, snow and glacier melt waters to the Salish Sea. The Nooksack runs from the North side of Mt. Baker while the Skagit drains water from the south side. 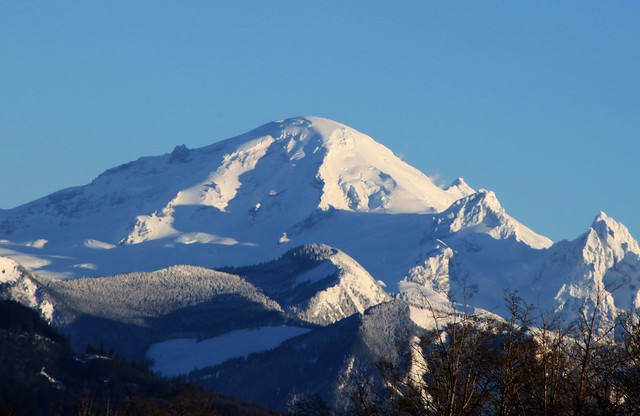 Mt Baker as seen from its Northwest side along the Canyon Creek confluence with the Nooksack River. Drainage from the South side feeds Baker Lake, Baker River then to the Skagit River

I usually like to take some family with me on such outings but this time I went alone because I wanted to go during the week with less traffic and I wanted to poke around, take photos and hunt mushrooms without being hurried along.

Up the Nooksack River

Forty miles east on the Mount Baker Highway from Bellingham I followed the Nooksack river valley up to Horseshoe Bend which is one of the more scenic spots on the river and in the valley. Having been here several times before, I knew it gave more scenic bang for the buck than most any other easily accessed spot on the river. Close by, just down river a bit, there was a state park campground that was closed for the season but which provided more river views and fungi galore without a crowd of campers. 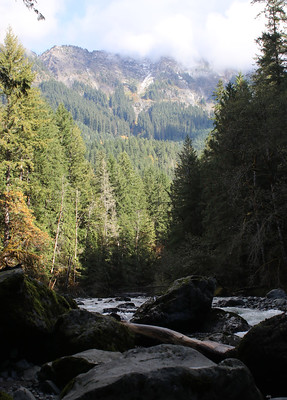 A view up the river and up to Church Mountain which sits above the River to the North.

Much of the fall color along the river was gone but a few autumn leaves from the Maple trees remained to complement the greens of the Cedars and Douglas-firs, the various mosses and lichens, and the green-grey water of glacial runoff from Mt. Baker and Mt. Shucksan. 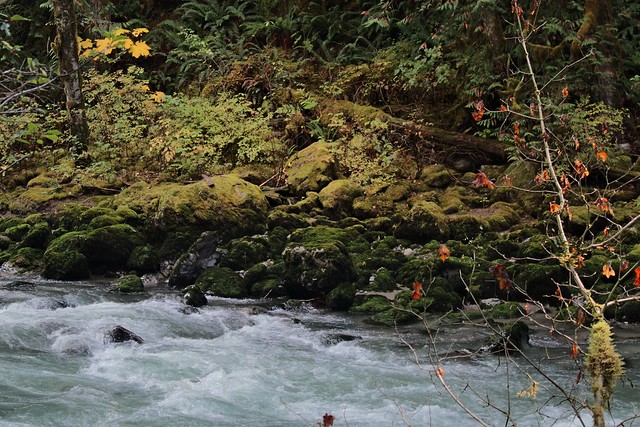 A slice of the river with a couple of big leaf and vine maples sporting a few remaining leaves against the mosses. 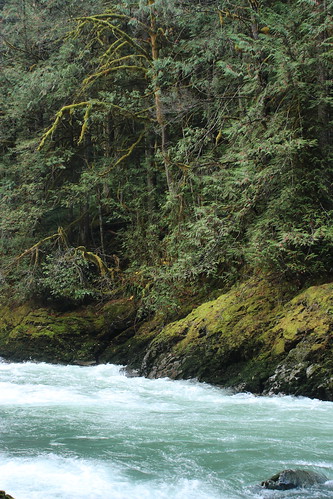 More river and moss right down to the water line.

Following the river down stream, the next few photos of the river are from the state campground including the mushrooms 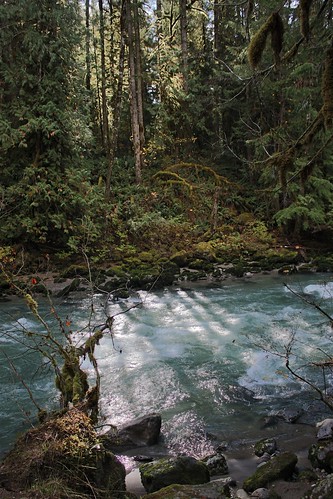 The view across the river is from one of the camp sites. Get your reservations in early if want one of these sites next year.

And now for some shrooms. 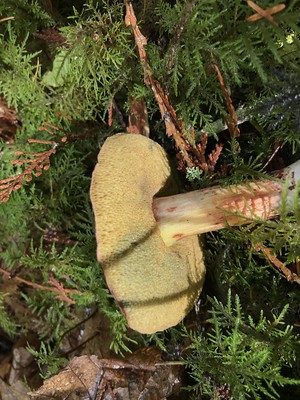 Although these are edible, they were not inviting to me. 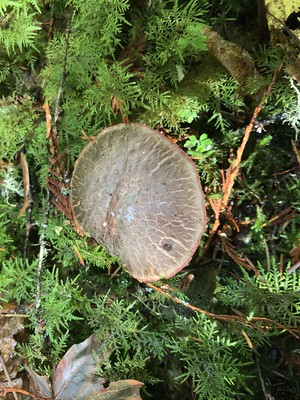 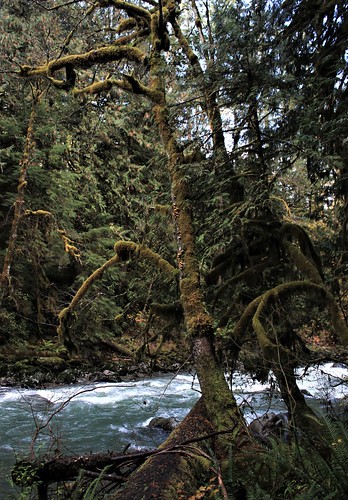 This moss covered mostly dead tree stands like a sentinel by the river with polypore fungi running up its trunk.

Up the Skagit River Valley

A week later, I headed up the North Cascades Highway following the Skagit river and valley to Rockport State Park to view the old-growth trees that made up much of the park timber. I am grateful to Browns Bay for alerting me of this lovely park earlier this year and it was only an hours drive away from home.

This state park consists of 642 acres of never logged, old-growth forest with a dense canopy of Douglas-fir, Western Red Cedar, plenty of Big Leaf Maples and a dense undergrowth. Except for the park building and the well done trail system, this plot allows us to experience the for much as it has existed for eons. Sadly, such old growth groves are vanishingly rare these days.

I was surprised that such a beautiful stand of old-growth forest, being highly accessible to the public, had never been logged.  According to the Park Ranger this land had been slated for logging in 1931 by its then owner, Crown Timber Co. After some study, they determined that it would not be profitable to log it. The next year they sold the plot to the State of Washington for $1.00 (and likely some future perks). Preserved under state control, it became a State park in 1960 for which we are all very grateful as it is an exquisite slice of a primal forest ecosystem for us to experience.

Loomed 5,541 feet above the River Valley and State Park was Sauk Mountain. This mountain has excellent trails to the top with superb views up and down the Cascade Range.  It is managed by the Mt. Baker –  Snoqualmie National Forest. Thus, both of the settings described in this post are within the same National forest system and only 30 miles apart as the crow flies.  The name Sauk, comes from Sah-kee-ma-hu (Sauk-Suiattle tribe), a group related to the Skagit tribes.

The following photo shows the Sauk river’s confluence with the Skagit from an overlook site on the bluffs above the rivers. 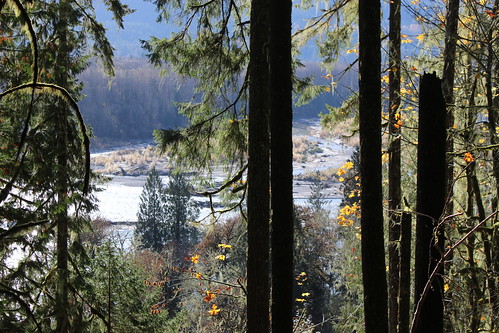 The Sauk River coming in from the top of the photo, drains largely from Glacier Peak, another active volcanic cone between Mt. Baker to the north and Mt. Rainier to the south.

Moving into the forest one is immediately struck by the lushness of the mosses and lichens dangling from anything they can attach themselves to.  Much of the hanging greenery is a lichen commonly called “Old Man’s Beard” (Usnea longissima.) 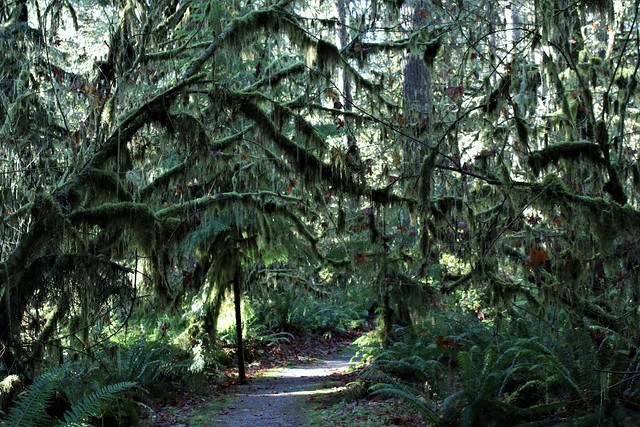 This is a fitting entry to one of the several trails in the park.

Seeing these beard lichens so plentiful is a very good sign of the air quality here as it is extremely sensitive to air pollution and is becoming increasingly rare. 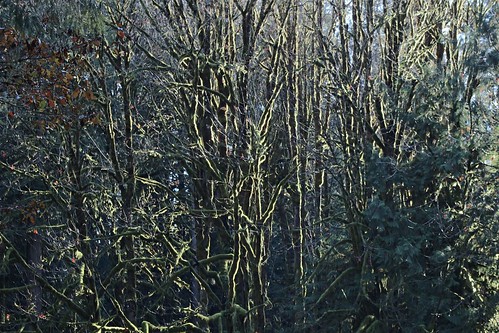 Mosses glistening in the sunlight 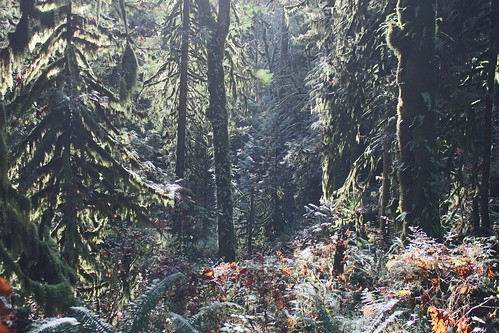 Sun filtering through trees on the bluff above the Skagit River 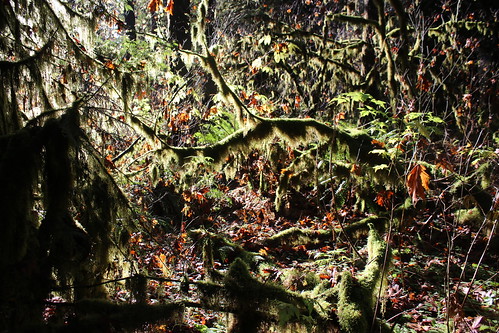 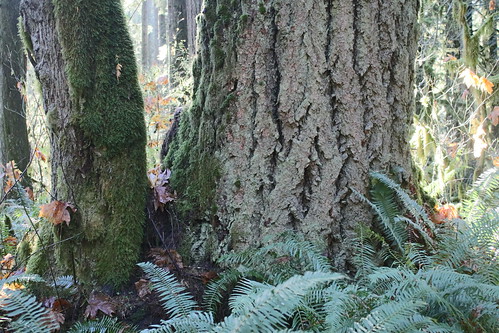 One of the big old growth Douglas-firs, many hundreds of years old. There should have been a person standing next to this tree to be able to appreciate its girth.

The recently blown down Douglas-fir to the right is blocking this trail which is otherwise handicapped accessible. I was fortunate to have run into the park ranger at this point along the trail. The ranger was excited to tell me of his plans for this blow down which was to have a section cut out that will allow a wheel chair to pass through. To do this he has a couple of local loggers lined up with large crosscut saws to open the hole. The saws will expose the tree rings on either side of the path so visitors in wheel chairs will be able roll into the gap and count the rings from their chairs. 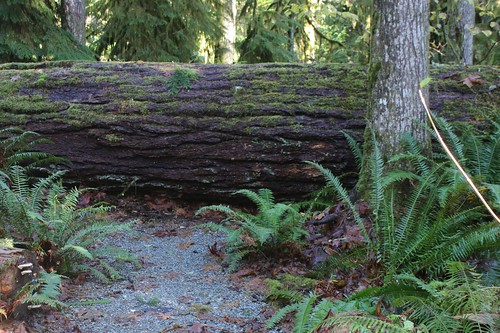 Fallen Douglas-fir tree across the trail. This tree stood 267 feet before it was toppled by the winds. Its diameter was ~ 6 -7 feet.

This is likely several hundred years old but a more exact dating will have to await the crosscut saws.

Finally he plans to photograph the event, staged like the old loggers captured by Darius Kinsey who famously documented the logging camps of the PNW a century and more ago. He further intends to print the photos in sepia like the old time photos were. See the Kinsey photo below. 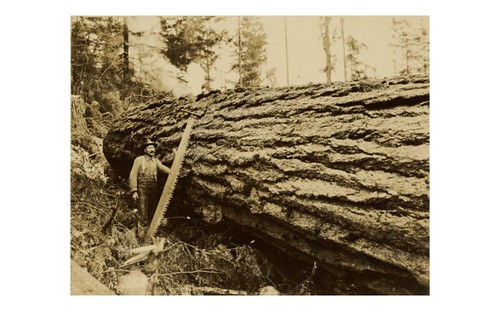 And now a few fine specimens of fungi and allies from this old growth forest. This park had been well picked over by mushroomers before I arrived. However I was able to find one beautiful Golden Chanterelle to take home for dinner and made into a sauce for our pork chops that evening. I left the rest of the shrooms for the slugs to enjoy. 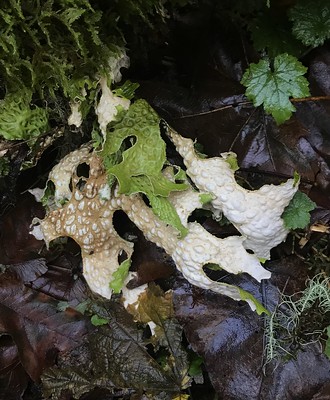 lungwort, lung lichen (Lobaria pulmonaria)  common in old growth forests but being very sensitive to pollutants, can not survive near urban areas. 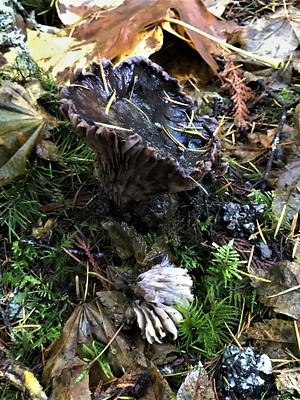 “Pig’s ear”  or “violet chanterelle,” (Gomphus clavatus ) Edible but not appetizing to me. 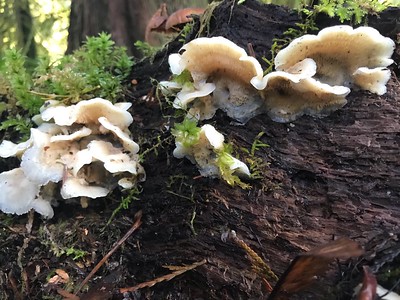 On my way home, I stopped by Concrete Washington where the Baker River joins the Skagit river as it flows its final few miles to Skagit Bay of the Salish Sea. This river comes out of the Mount Baker drainage that empties into Baker Lake whose outflow becomes the Baker River. 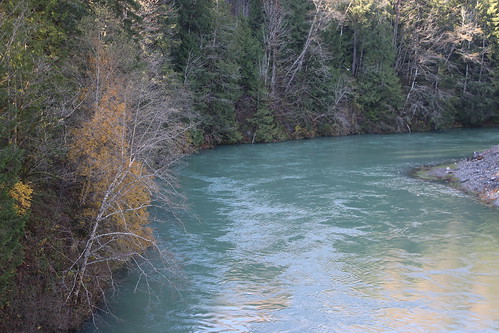 The Baker River exiting Baker Lake headed for the Skagit River and finally to the Salish sea.

So there is a quick view of some of the environs of our local rivers and major river valleys from the far Northwest corner of the PNW. Actually I showed four rivers rather than two as in the title but how could I have left the others out?

I hope you enjoyed coming along to see our corner of the world.