The University of British Columbia Museum of Anthropology (MOA)  is among my favorite museums. For Northwest Pacific Coast Indians’ history it is unsurpassed. I recently returned there having not been for a few years and enjoyed it as much as ever. Unfortunately the Great Hall was being seismically refitted and therefore its giant totems were not available for viewing. Fortunately I have some photos from previous visits that can fill in. Although the museum has artifacts and exhibits from cultures on all continents, the focus is on the more local cultures including the eight tribes of the Pacific Northwest Coast ranging from the southern Puget Sound, the Salish Sea and northward through what is now British Columbia and Southeast Alaska. These indigenous peoples are known for many things but probably none more prominent than their elaborate cultural, totemic and artistic carvings, particularly their totem poles and Bighouse posts that told stories of their cultural, tribal and family histories.  The Bighouse was built with large symbolically carved cedar posts that held up the beams for the roof structures which were also large cedar logs. Extended families shared space in these Bighouses that were also used to host large gatherings for ceremonial purposes such as the  Potlatches. 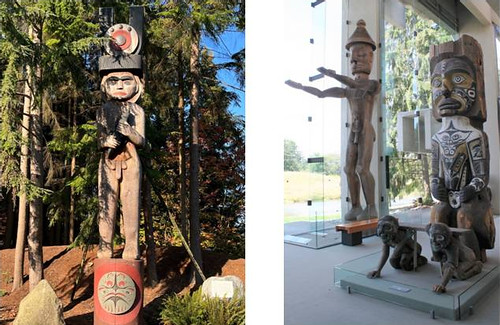 Haida village, 1878 — Wikipedia  the objects presented here are but tiny fraction of the wealth of totems, house poles and other carvings in a typical village. 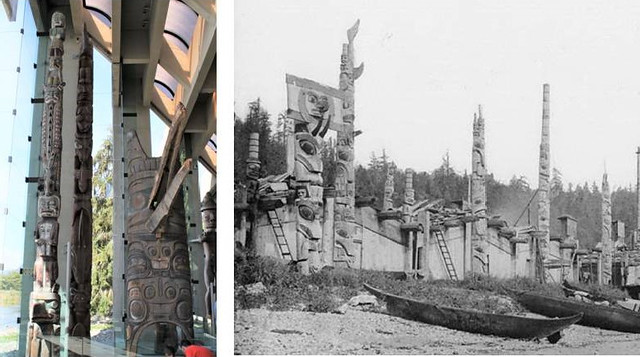 Totem Poles in the Great Hall at MOA…    … and as they were originally in this 1878 village photo from Wikipedia. Notice the totem poles similar to those in the left photo.

I had the privilege of visiting the remains of similar Haida Village on Haida Gwaii a few years back where I saw the village Chief’s totem shown below.

The village is now overtaken with moss and the structures are rather weathered. The village is tended by local tribal members today.

An old Haida village on Graham Island of Haida Gwaii.  Left is a chief’s totem that marked the entrance to his Big house or long house. Our guide is pointing to an eagle symbol that identified the chief. On the right are mortuary trees with holes cut into them where burial boxes or baskets containing remains would be placed. 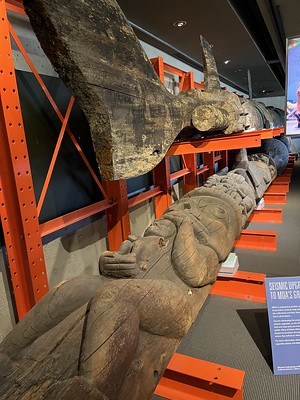 Totem poles from the Great Hall stored for safety while the hall is seismically mitigated. 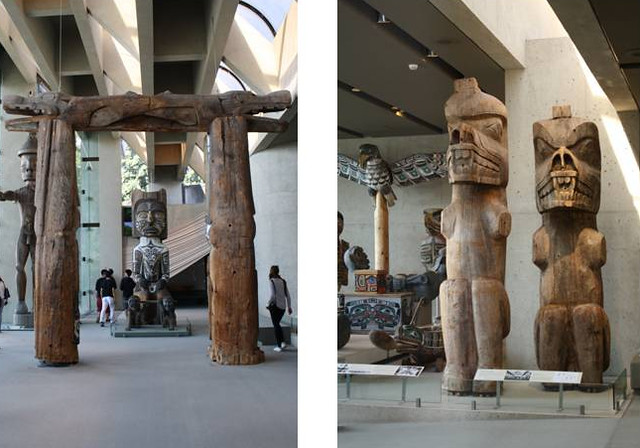 Posts and beam probably outlining an entrance to a Big House. Bear totems, probably used as frontal house posts  These photos are from the Great Hall, taken on a previous visit to the MOA. 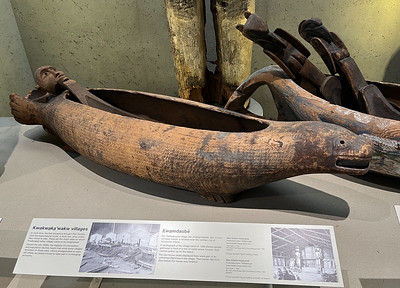 Food and gifts were served in large house dishes such as this seal along with very large decorative ladles that you can see here. 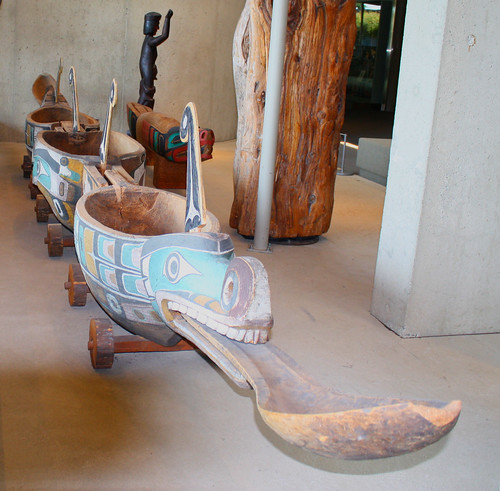 This three-part house dish on wheels with enormous ladles as tongues from early 20th century was in the image of the mythical two-headed serpent. See below.

Other figures and ceremonial objects 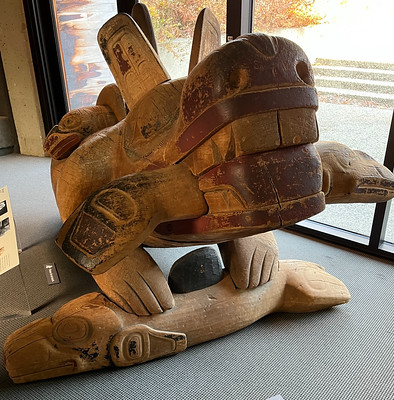 Wasgo, a mythical creature that could transform from a wolf to a sea monster in Haida legend. Here it has captured three Orcas. Bill Read, 1962. 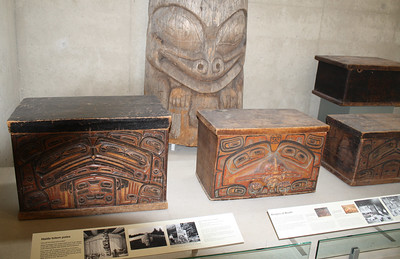 Totemic  masks were and are central to the the Potlatch ceremonies, dances and feasts as they were essential props for telling their cultural histories. Among the numerous masks displayed at the MOA and in the culture, two stick out as particularly iconic as they represent major themes of the Northwest coast culture: the Raven and Wild Woman of the Woods. 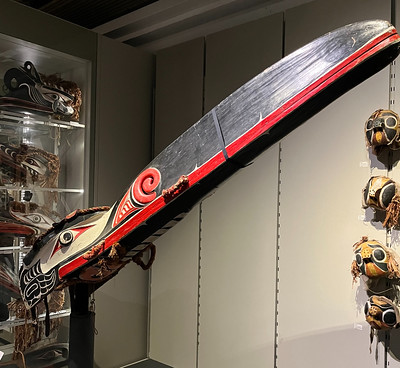 A huge Raven mask about 8 feet long, carved of cedar. This was worn in ceremonial dances at feasts and potlatches.

Note the two sets of hand grips suggesting that perhaps it took two dancers to operate the mask. 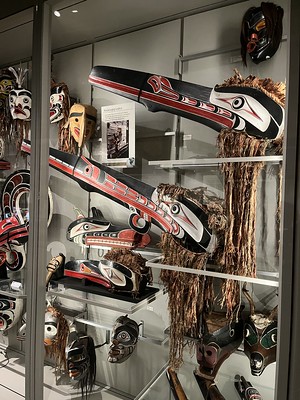 More Raven masks, central to all north coast indigenous peoples. Not only were they artistically carved and constructed, they were worn and danced with. How they managed these huge masks and moved with them I can not conceive. 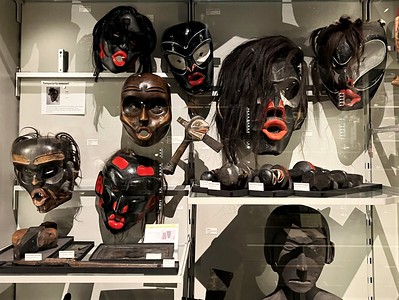 “Dzunuk‘wa” or “Tsonoqua” Wild Woman of the Woods.  Mythical giantess who inhabits the deep woods and captures errant children who wander too far into the forest.

Her roles vary somewhat from one tribe to another. For example, she is also said to be a bestower of wealth, and in some depictions, she can be a male. She is always portrayed with black face, hairy body, sunken cheeks and pursed lips. 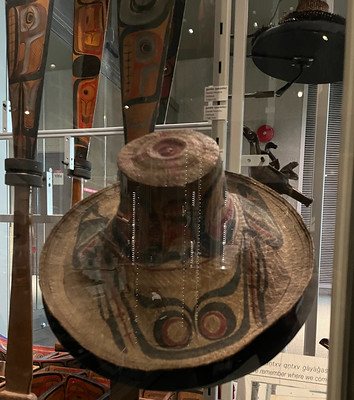 These peoples were masters of weaving hats of cedar bark to repel the heavy rains as well as clothing and anything else that provided warmth or dryness. 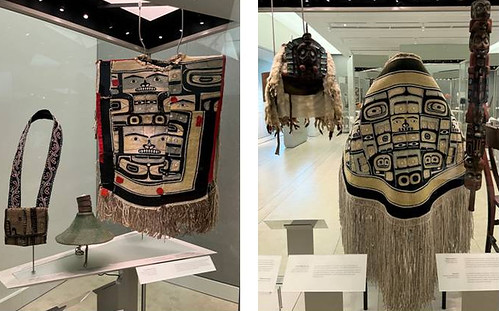 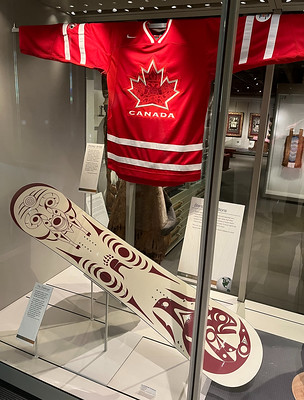 Hockey Jersey and traditional designed snow board. A fusion of contemporary Canadian and Indigenous motifs